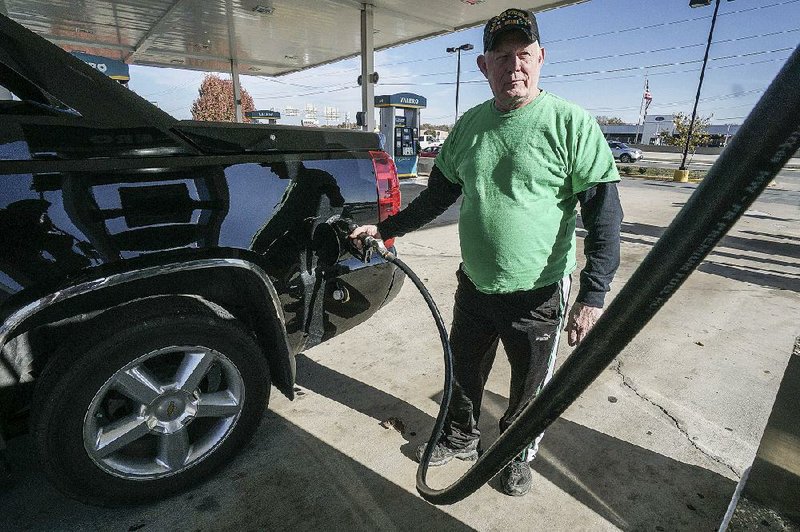 Micheal Campbell pumps gas into his car Friday at the Valero station on Warden Road in North Little Rock. Gas prices are expected to stay where they are for the rest of the year.

Americans will still see low gasoline prices this Christmas season despite a recent uptick at the pump, analysts say.

Retail gasoline prices have risen about 4 cents nationwide in the past week, mirroring oil prices, which got a boost after OPEC's recent deal to limit crude production.

But analysts say they don't expect gasoline prices to rise much further, partly because OPEC's agreement has already been priced into the market.

Fuel demand also typically wanes during the winter, keeping prices suppressed this time of the year.

Gasoline prices will stay around $2.20 a gallon nationwide, said Tom Kloza, chief oil analyst for gasbuddy.com, adding that prices may even drop in a month.

"You'll see that prevail for a good portion of the winter," he said. "Families are really saving money."

Some service stations in Arkansas are selling gasoline even cheaper than the state average. In Fort Smith, gasoline can be found as cheap as $1.76 and $1.79 a gallon, according to gasbuddy.com, a price-tracking website.

The highest prices for gasoline in the state can be found in Hope and Turrell, which is in Crittenden County, where gasbuddy.com showed stations listing the price of regular at $2.69 Friday.

U.S. consumers have been benefiting from some of the lowest gasoline prices in a decade as a result of low oil prices.

Crude oil prices have been cut in half since 2014, when they traded above $100 a barrel, as a result of abundant supply and weak demand.

Prices have increased after some of the world's largest oil producers agreed last week to cut output by 1.2 million barrels of crude a day in an attempt to re-balance the market.

The decision by the Organization of the Petroleum Exporting Countries reversed a two-year strategy in which the cartel sought to remain dominant in the oil market by keeping prices low to dissuade others -- mainly U.S. shale producers -- from placing too much oil online.

OPEC also is meeting with non-cartel members including Russia, Mexico and Kazakhstan on Saturday to convince them to join the production caps.

Russia has said it would reduce oil output, but analysts said it's too early to know if the country will follow through.

On Friday, West Texas Intermediate crude rose 66 cents to $51.50 a barrel on the New York Mercantile Exchange. Brent crude increased 44 cents to $54.33 a barrel in London.

However, prices won't go much higher until members of the cartel prove that they will stick to the production cuts they agreed to, which has been a problem in the past, analysts said.

"I think we've seen most of the increase -- the OPEC cuts are kind of priced into the market," said Michael Lynch, president of Strategic Energy and Economic Research Inc.

Bloomberg News reported Friday that an analysis of OPEC data shows that even if OPEC members stick to the production cut, it won't be enough to significantly reduce oil inventories, which are at record levels, in 2017.

"The problem is that the whole oil-shale business ... is also getting better and shale in the U.S. is the big game changer that probably means that the best OPEC and non-OPEC [countries] can count on with crude prices is getting the market balanced," Kloza said.

This means OPEC's agreement will have little influence on fuel prices in the coming months, he said.

Kloza said he expects gasoline prices to rally in 2017, mainly because prices traditionally rise in the spring as demand starts to increase.

"It's going to be a more expensive year for gasoline than 2016, but modestly more expensive," he said, adding that prices will be "cheap by the standard of the last six years or so."