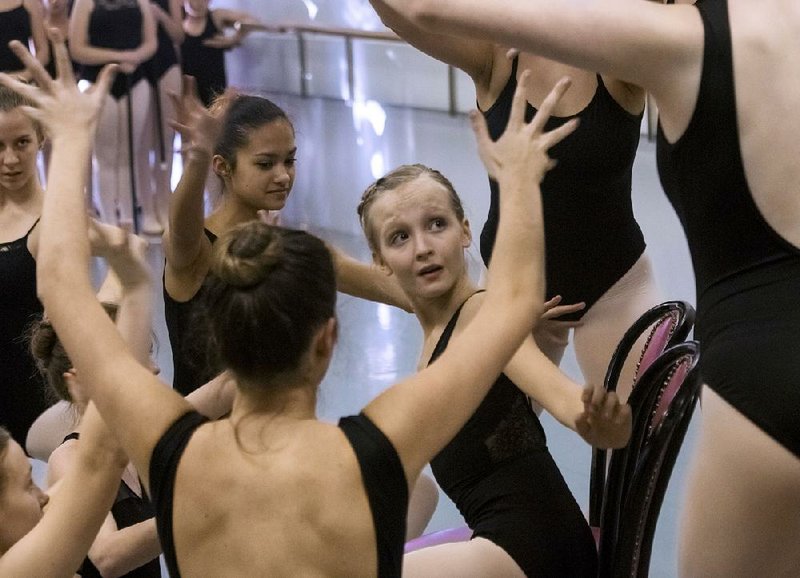 Clara, played by Izzi Rhodes (center), is surrounded by other community cast members during a rehearsal for Ballet Arkansas’ production of The Nutcracker.

The floor trembles with every spring and leap. The lush strains of Tchaikovsky bounce off walls of exposed brick and giant mirrors that reflect a row of graceful dancers.

A young man walks across the floor, a female dancer in his arms, held up high over his head.

"The ceiling was lower in the old studio," says Ballet Arkansas' Artistic Associate Laura Hood Babcock. "We couldn't do all the lifts until we were on the stage."

The Nutcracker is a familiar production for Ballet Arkansas but this year, one could almost say they're in a whole new world. They moved into their new studio space -- one with ceilings high enough to accommodate the grandest leaps and lifts -- on Main Street in October.

And, this weekend, their annual production of The Nutcracker will return to its permanent, but completely revamped, home of Robinson Center Performance Hall.

It's a homecoming that will present distinct advantages and a few challenges as well, as the full company moves in today for spacing rehearsals, with whole run-throughs starting Wednesday.

That's when things get tweaked and adjusted even more for the stage size and sightlines in the performance hall, which Babcock likens to an opera house.

Arkansas Symphony Orchestra's Associate Conductor Geoffrey Robson, who conducts the orchestra for Nutcracker performances, has already had a chance to experience the redone hall and he calls it a "world-class facility. It makes a huge difference."

Is the company excited?

Company dancer Meredith Loy says, "I'm mostly excited about walking out on the stage for the first time because I've never gotten that experience."

While Loy, who grew up in Little Rock dancing with Arkansas Festival Ballet, attended The Nutcracker at the old Robinson Center almost every year, this will be her first time to be part of the company, dancing the Dew Drop Fairy, a marzipan, a snowflake and the Ballerina Doll.

[GALLERY: More photos of Ballet Arkansas rehearsing for The Nutcracker]

Loy isn't the only one wearing multiple costumes. There are more than 225 different roles with 200 community cast members plus 12 company dancers, an apprentice and eight pre-professional temporary company dancers. According to Babcock, the company dancers average five costume changes each (and most of those are quick changes).

That's just one area in which they hope the new setup at Robinson will come in handy.

While as of a couple of weeks before show time, Babcock hadn't been able to examine the new space herself, she says she has been told some of the dressing rooms are "two steps off the stage," which will be perfect for quick costume changes.

"They wouldn't have to change with a sheet around them," she says. "They'd actually have somewhere they can look in a mirror and quickly get their hair ready or what have you."

The dressing rooms are also expected to be larger and more functional and the loading area will make moving in much easier. Actually, backstage should have more space in general, which is necessary when herding large casts (many of whom are children).

But, Babcock adds, "Conversely to the good is the unknown."

That larger space means greater distances to cover for dancers trying to get from one side of backstage to the other. The depths of the wings will also influence the timing for entrances -- a key component of ballet.

Then there are the technical aspects, such as lighting cues and how the distance will affect the interactions with the orchestra. But, with an ASO concert and the touring production of Elf under their belts, the backstage technicians should have worked out many of the kinks by the time The Nutcracker begins.

Usually, there's only one rehearsal with the dancers and orchestra (dancers practice to recorded music), but this year they've arranged for two practices. The collaboration requires a lot of planning and discussion between Babcock and Robson about tempo and nuances. It can be complicated and very specific to the musicians and dancers.

According to Robson, playing in the orchestra pit is an adjustment for the conductor and musicians. And there are added complications in directing Tchaikovsky in a way that matches the ballet.

"I'm following the dancers and watching their movements and making judgments about tempo based on that," he says.

Robson sits in on multiple rehearsals so he can then take what he sees and communicate that to the musicians.

He says, "I always enjoy going and seeing the changes that have happened in the production and meeting the new dancers and studying what they're doing so I can be informed as possible [while] directing the orchestra."

Any complication, though, is ultimately very rewarding for all concerned.

"It is so much fun to dance with live music," Babcock says. "The energy feeds off each other. It literally keeps them on their toes."

This year continues a progression that has been going on for some time, a gradual evolution and growth for Ballet Arkansas. As the company dancers get technically and artistically more proficient, the choreography has advanced.

"The Waltz of the Flowers" has been reworked this year to include more difficult, traditional choreography with what Babcock calls "bravura work," or "the stuff that the audiences want to see: the multiple spins, higher jumps, balances and choreography that they don't even know is more difficult but becomes more pleasing because of the patterns and the movement and dancers who are more seasoned."

This will also be the first year they have not had to hire guest dancers to fill principal roles. Last year there were multiple injuries that forced them to bring in outside dancers but, with covers and understudies ready to go, this year it should stay in the family.

"I think we're covered that we should be fine no matter what, but fingers crossed," Babcock says.

While this year already has many new elements, the goal is to keep evolving. Babcock says they hope to build their own permanent sets and backdrops specifically for the new Robinson. They also hope to eventually take their show on the road to other parts of the state.

For now, though, the focus is on their first production in their new home.

"It's a great tradition and great music," Robson says. "The ballet looks fantastic. It should be very beautiful."

Babcock adds, "I can't wait to be able to sit back in the audience and watch it with that fresh set of eyes."