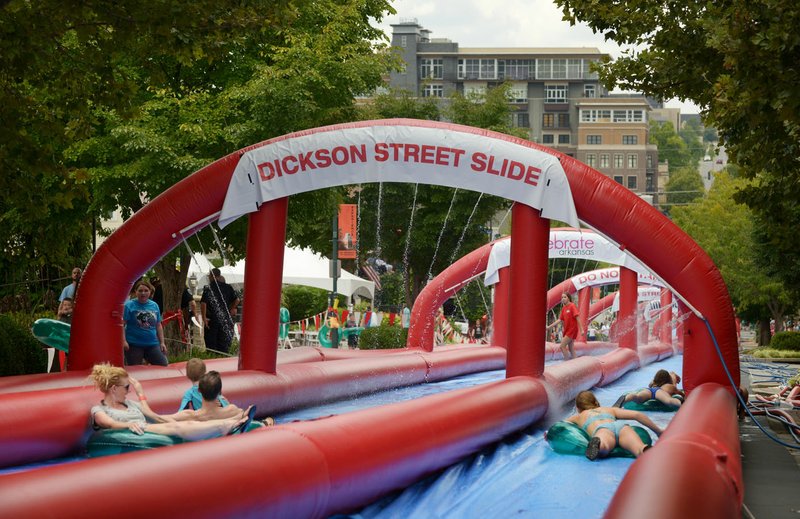 FAYETTEVILLE -- There was a decidedly local flavor to this year's Dickson Street Slide.

For the second straight summer, thousands trekked to Dickson Street on Sunday to hurtle down a 1,000-foot water slide in support of Soldier On Service Dogs, a nonprofit organization that trains and places highly skilled assistance dogs with Northwest Arkansas veterans for free.

To get involved with Soldier On Service Dogs, visit the group’s website at www.soldieronservicedogs.org or call 479-521-9301.

But unlike last year, when the event was organized through Utah-based company Slide the City, Soldier On were ensured more proceeds thanks to shouldering the brunt of organizing the event, according to Angie Pratt, founder and director of Soldier On.

"Do you hear that laughter," said Pratt, pointing to the legion of youngsters, teens and adults careening past the Dickson Street Bookshop and Bordinos Restaurant on inner tube. "We've got 250 volunteers running around here. If that's not community, I don't know what is."

While total proceeds weren't available Sunday, by 2 p.m. the Soldier On merchandise tent had exceeded sales from last year's event, said Denise Bembenek, event coordinator for Soldier On. Nearly 2,000 had already registered and attendance was picking up, Bembenek added. The event lasted from 9 a.m. to 9 p.m.

"The quality matters. We need to acquire a steady source of quality dogs in the program," Pratt said. "Breeders are donating puppies to us and we're going to a conference to talk about how to evaluate shelter and rescue dogs as potential service dogs."

"We need folks who take these dogs and teach them (basic commands). More importantly, love and socialize that dog and don't teach him any bad behaviors. No aggression whatsoever."

Pratt said it takes roughly two years to train a dog for and the organization can't waste time trying to "untrain" bad behaviors.

Many of the veterans serviced by Soldier On have post-traumatic stress disorder or have suffered a traumatic brain injury, Pratt said. The dog needs to be able to focus solely on their veteran, and some of the more successfully trained breeds have been Golden Retrievers and Labradors.

A dog's positive impact on a veteran can be dramatic. Pratt said one veteran contemplating suicide had his outlook altered when he realized no one would be around to take care of his dog. Others who were retreating into their homes have slowly integrated back into society.

For several attendants, the event was a way to get out as a family and support a good cause while having fun.

Kevin and Alison Jones brought their two kids down from Rogers. They called this year's event "near perfect."

Sarah Stobaugh made the hour-long trip from Ozark.

"Knowing that the (event) is serving a good cause makes it more fun," she said.

Several of the shops and restaurants lining Dickson Street were flush with guests who doubled as onlookers to the wet and wild scene.

Sara Lusher, owner of Emelia's Mediterranean Kitchen, said she enjoyed the water slide because of its "different" appeal and potential to bring in foot traffic.

"It doesn't matter if they eat here today or two weeks from now," Lusher said.