Back to school: UA students return to Fayetteville 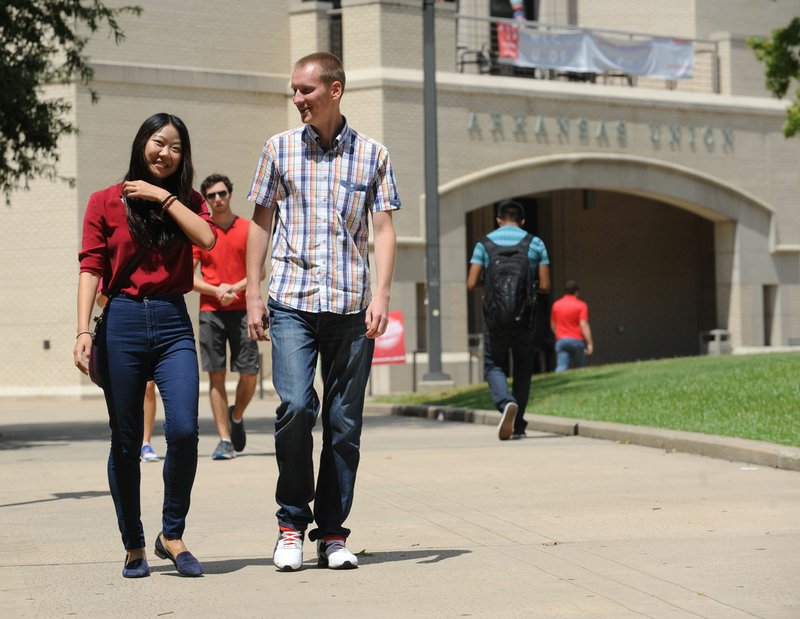 Students walk Friday through the Union Mall on the University of Arkansas campus in Fayetteville.

FAYETTEVILLE -- The annual student migration has charged into Fayetteville like a herd of wildebeest.

For more information on the university’s economic impact, go to:

To find more of the university’s enrollment data, go to:

Backpack-clad young adults seemingly pop out of every corner. They pack the bars; fill parking lots and restaurants and form a line at the city's water utilities office so long, you'd think free pizza waited at the end.

Fall enrollment at the University of Arkansas has increased each year since 2004, and in larger margins in recent years, according to the university's statistics available online. More than 26,700 students enrolled last fall.

So what if it takes a little longer to drive to work or check out at the grocery store? The upside is steeper than the down, officials said. Students are a huge part of what makes Fayetteville unique, said Kathy Deck, director of the university's Center for Business and Economic Research.

"When we think about students and the economy of Northwest Arkansas, obviously we wouldn't have anything like the amenity base that we have if we didn't have the students here," she said.

The university's economic impact on Northwest Arkansas was more than $932 million in 2014, according the center's latest study.

Is that the mayor?

Back to school time is absolutely crazy for the 17 city employees who collect deposits and turn on water for the thousands of students who move to Fayetteville each fall, said Annette Jarnagan and Cheryl Partain with the city's utilities financial services.

"Everybody in the office just pitches in," Partain said. "I mean, I'm the manager, and I'll be answering phones, I'll do faxes, our senior staff will go in the call center and file paperwork."

"We feel like it has blown up every year, but I think it's about the same," she said.

An average day during the summer yields about 70 work orders. That number balloons to about 400 per day during the "student migration," Jarnagan said.

The University of Arkansas can accommodate just more than 5,700 students with its on-campus housing, according to the university's Housing Department. That means the remaining 20,000 or so students have to live somewhere, and those places have utilities.

"We have some who come in here and don't even know how to write a check," she said. "We've had some in here who wanted to know when their hot water was going to be turned on. You have to check with your electric company or gas company for that."

The office put together a handy list for students of phone numbers and websites for utilities companies such as electric, gas, cable and Internet, Jarnagan said.

"They're always asking, so it was much easier to make a list and say, 'Here you go,'" she said. "They do have a lot of questions."

Boitshepo Balozwi, a journalism graduate student from Botswana, ventured to City Hall on Wednesday to get the water turned on at her new place. It's the first time Balozwi has been to Fayetteville -- or the United States, for that matter.

"It helps that they have such a good support system for international students, so you don't really have to fret about anything," she said.

Parking downtown and in the entertainment district spikes in August, said Melissa Elmore, account clerk with the Parking Management Division.

Revenue from parking meters in the entertainment district, the main stretches being Dickson, Lafayette and Spring streets, jumped from more than $83,500 in July 2015 to more than $98,000 in August last year, according to statistics from the city.

The increase becomes more dramatic in the mostly residential areas downtown between August and September after students move in, parking revenue statistics show.

The city benefits from having thousands of students, including increased sales tax revenue. Students also help the city qualify for money through the federal Community Development Block Grant, said City Attorney Kit Williams. Fayetteville has received an average of just more than $581,000 per year since 2012 in Block Grant funding, according to the Community Resources Division.

The average student income is pretty low (think of all the college kids slinging burritos or delivering pizzas), but their spendable money is not far from the average resident (think of students from affluent families who don't have a job, but drive a nice car), Williams said.

The students skew the median income rate the federal government uses to decide where to dole out money which is the case for most college towns, Williams said.

"We get a little bit more there than maybe we would've gotten otherwise," he said.

One place that probably would not exist without the students is Riffraff, a store college-aged women have flocked to both online and at its location on Block Street, said Savannah Murphree, visual inventory manager.

The local retailer started off selling refurbished furniture. When it moved to Block Street about five years ago, the owner, Kirsten Blowers, figured it'd be more cost-beneficial to sell clothes rather than remove the built-in clothing racks, Murphree said.

The store jumped on social media and now its website, shopriffraff.com, sells more than its Block Street or Dallas locations, she said.

Just because Riffraff's success moved beyond the city doesn't mean it's forgotten where it comes from, Murphree said.

"It's very much like, Fayetteville local vibes here," she said.

Not every benefit is monetary. The city works closely with the university to engage students in volunteer opportunities, said Kristina Jones, volunteer and community programs director with the Parks and Recreation Department.

About 180 students picked up more than 11 pounds of cigarette butts off the streets of downtown Fayetteville on Tuesday. Such an effort wouldn't be possible without the university's volunteer organizations, such as the ROCK Camp (Razorback Outreach for Community and Knowledge), which aims to get freshmen involved and oriented with their new city, Jones said.

About 160 students picked up trash from the city's trails the week before. More students tackled Scull Creek on Thursday.

Jones estimated students comprise about two-thirds of the Parks Department's volunteer base.

Michael Bennish, Connor Williams and Ben Luton, all 18 from Joplin, Mo., are freshmen who are looking for volunteer opportunities while they get acclimated to their new surroundings. Lead Hogs, which introduces new students to various kinds of leadership and involvement activities, piqued their interest.

Bennish carried a bag from Gearhead Outfitters while they walked along Dickson Street on Tuesday. He got a pair of outdoor sandals.

"This is the epitome of a college town," he said.

The Fayetteville Police Department increases its presence on Dickson Street the first few weeks of the fall semester by having plainclothes officers on the lookout for underage drinkers, said Sgt. Craig Stout.

"We'll be out," he said. "The thing is, I could advertise that I'm out, and I'm still going to catch people."

College students aren't always the offenders. Car break-ins spike when school starts back up, and the students are the victims because they often keep backpacks with laptop computers and other valuables in their unlocked cars, Stout said.

That would be Old Rasputin, an 11 percent alcohol-by-volume stout. Most beers are 4 percent or 6 percent.

Most people can't get through one pint, Beauchamp said.

She said women usually go for a pineapple upside-down cake shot, which is vanilla vodka and pineapple juice. Just about every college student loads up on Vegas bombs -- a mix of Crown Royal, butterscotch Schnapps and Red Bull.

A veteran of the bar scene such as Beauchamp doesn't worry when the students come to town. It's a different story for Colin Stewart, executive chef at Kraken Killer Seafood.

Kraken opened in February, so its staff is just now getting a taste of what's to come. Preparation is key, Stewart said.

"I don't ever want to run out of anything. That's my main thing," he said.

The first day of class is Monday.