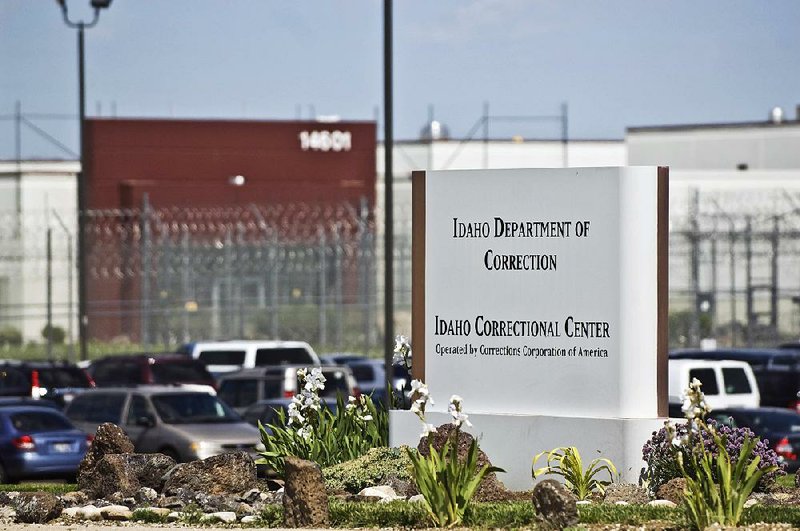 The Idaho Correctional Center is south of Boise and is operated by Corrections Corp. of America. - Photo by AP / CHARLIE LITCHFIELD

WASHINGTON -- The Justice Department plans to end its use of private prisons after officials concluded that the lockups are both less safe and less effective at providing correctional services than those run by the government.

Deputy Attorney General Sally Yates announced the decision Thursday in a memo that instructs officials to either decline to renew the contracts for private prison operators when they expire or "substantially reduce" the contracts' scope. The goal, Yates wrote, is "reducing -- and ultimately ending -- our use of privately operated prisons."

"They simply do not provide the same level of correctional services, programs, and resources; they do not save substantially on costs; and as noted in a recent report by the department's Office of Inspector General, they do not maintain the same level of safety and security," Yates wrote.

The Justice Department's inspector general last week released a critical report concluding that more safety and security incidents occurred at privately operated prisons than at the government's prisons. The private prisons, for example, had higher rates of assaults -- both by inmates on other inmates and by inmates on staff -- and had eight times as many contraband cellphones confiscated each year on average, according to the report.

Disturbances in the private prisons, the report said, led in recent years to "extensive property damage, bodily injury, and the death of a Correctional Officer." The report listed several examples of mayhem at private prisons, including a May 2012 riot at the Adams County Correctional Center in Mississippi in which 20 people were injured and a correctional officer killed. That disturbance, according to the report, involved 250 inmates who were upset about the quality of food and medical care.

"The fact of the matter is that private prisons don't compare favorably to Bureau of Prisons facilities in terms of safety or security or services, and now with the decline in the federal prison population, we have both the opportunity and the responsibility to do something about that," Yates said.

The problems at private lockups were hardly a secret, and Yates said Justice Department and Bureau of Prisons officials had been talking for months about discontinuing their use. Mother Jones magazine recently published a 35,000-word expose detailing a reporter's undercover work as a private prison guard in Louisiana -- a piece that found serious deficiencies. The Nation magazine wrote earlier this year about deaths under questionable circumstances in privately operated prisons.

In response to the inspector general's report, the contractors running the prisons noted that their inmate populations consist largely of noncitizens, presenting them with challenges that government-run prisons do not have.

Scott Marquardt, president of Management and Training Corp., wrote that comparing Bureau of Prisons lockups to privately operated ones was "comparing apples and oranges." He generally disputed the inspector general's report.

"Any casual reader would come to the conclusion that contract prisons are not as safe as [federal] prisons," Marquardt wrote. "The conclusion is wrong and is not supported by the work done by the [Office of the Inspector General]."

Yates, though, noted that the Bureau of Prisons was "already taking steps" to make her order a reality. Three weeks ago, she wrote, the bureau declined to renew a contract for 1,200 beds at the Cibola County Correctional Center in New Mexico.

Yates wrote that the bureau also would amend a solicitation for a 10,800-bed contract to one for a maximum 3,600-bed contract. That, Yates wrote, would allow the Bureau of Prisons over the next year to discontinue housing inmates in at least three private prisons, and by May 1, the total private prison population would stand at fewer than 14,200 inmates.

She said it was "hard to know precisely" when all the privately run prisons would no longer have federal inmates, though she noted that 14,200 was fewer than half the inmates they held at their apex three years ago, a figure she said indicated the department was "well on our way to ultimately eliminating the use of private prisons entirely."

"We have to be realistic about the time it will take, but that really depends on the continuing decline of the federal prison population, and that's really hard to accurately predict," Yates said.

According to the inspector general's report, private prisons housed roughly 22,660 federal inmates as of December 2015. That represents about 12 percent of the Bureau of Prisons total inmate population, according to the report.

In her memo, Yates wrote that the Bureau of Prisons began contracting with privately run institutions about a decade ago in response to rapidly rising prison populations, and by 2013, as the federal prison population reached its peak, nearly 30,000 inmates were housed in privately operated lockups. But in 2013, Yates wrote, the prison population began to decline because of efforts to adjust sentencing guidelines, sometimes retroactively, and to change the way low-level drug offenders are charged. She said the drop in federal inmates gave officials the opportunity to re-evaluate the use of private prisons.

Yates wrote that private prisons "served an important role during a difficult time period," but they had proved less effective than prisons run by the government. The contract prisons are operated by three private corporations, according to the inspector general's report: Corrections Corp. of America, GEO Group and Management and Training Corp. The Bureau of Prisons spent $639 million on private prisons in fiscal year 2014, according to the report.

Yates said it was "really hard to determine whether private prisons are less expensive" and whether their closure would cause costs to go up, though she said officials did not anticipate having to hire additional Bureau of Prisons staff members.

"Bottom line, I'd also say, you get what you pay for," Yates said.

Arkansas has not had a private prison since 2001, when Wackenhut Corrections Corp. -- now The GEO Group Inc. -- did not request a renewal of its five-year contract to run the McPherson and Grimes units in Newport. The company, in deciding not to renew, cited the excessive costs to run the units, especially McPherson, which at the time housed all the state's female inmates.

Less than two years after the prisons returned to state control, a U.S. Justice Department investigation of the prisons declared conditions there "unconstitutional."

When lawmakers broached the idea of reviving privatization in 2008 and 2009, a previous Department of Correction spokesman said T̶h̶u̶r̶s̶d̶a̶y̶ at the time*, the state's experience with Wackenhut had made the idea unpopular within the department. Then-Gov. Mike Beebe also was in opposition to the plan, the Arkansas Democrat-Gazette reported.

The department does not have a "specific prohibition against using private bids in-state," said SSolomon Graves, the department's current* spokesman.

While there are no current contracts with private prisons, some Arkansas prisoners do end up in their care. Beginning in 2015, Arkansas started contracting with the Bowie County Correctional Center in Texas to house up to 336 inmates at up to $36 per inmate per day, as well as off-site medical costs. Bowie County, in turn, contracts out the operation of the Texas lockup to LaSalle Corrections, a Louisiana company that also operates prisons in Georgia.

Graves said the state currently has 334 inmates at the prison, which is on the state line in Texarkana, Texas.

Information for this article was contributed by Matt Zapotosky of The Washington Post and by John Moritz of the Arkansas Democrat-Gazette.