No secret: Hogs' pass defense must step up 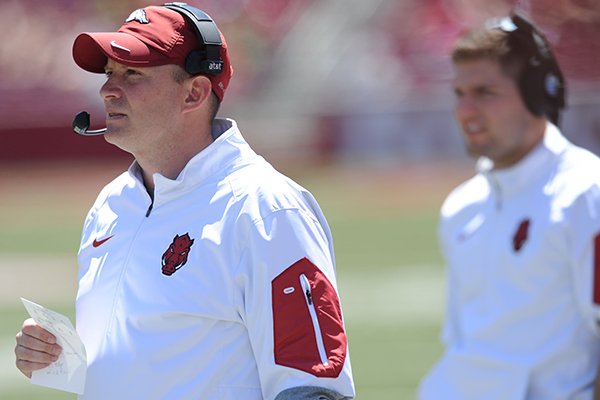 FAYETTEVILLE -- They were the closing act on the 2016 Arkansas Razorbacks football media days last Sunday.

The assistant coaches spread out in the massive weight room.

Most, like their head coach, are extroverted optimists who believe that in the very worst scenario the glass is at least half full.

Robb Smith, starting his third season as defensive coordinator, is a friendly guy who has a warm and engaging smile and a streak of seriousness as wide as a football field.

When the first question was: "Why should we expect the defense to be better?'

His smile spread and he said: "Wow, that's a really good question."

Without much hesitation he added: "For one, we are more experienced and the guys have really understood what is expected from them by their position coaches.

"Second, although it is still early in this camp, we are seeing more depth especially at linebacker. The more help we have there, the better Brooks [Ellis] and Dre [Greenlaw] will be."

Ellis and Greenlaw led the team in tackles last season.

Smith was told that a few of the defensive backs had said they were not happy with the pass defense last season and he quickly said: "They shouldn't be. They didn't play well enough and we didn't coach well enough."

Last season the Razorbacks defense gave up 3,577 yards and 18 touchdowns through the air.

Against the run they were much better, allowing 1,514 yards, but they did give up 25 touchdowns.

Probably even more dramatic statistics were that in the Razorbacks' eight victories last season, they gave up zero touchdowns through the air in four of those, one touchdown pass in three games and three in that wild-and-crazy game against Ole Miss.

Chad Kelly, likely the best quarterback in the SEC this season, passed for three touchdowns and 368 yards. He completed 24 of 34 passes.

That overtime victory over Ole Miss was won with a bit of luck that started with a heave on a fourth down that turned into a first down, but only after a great bounce, a fumble and recovery by the Razorbacks.

Still, even Alabama has to have luck at some point in the season.

In the Razorbacks' five losses they gave up two touchdown passes three times, one against Toledo in a weird 16-12 loss and five to Mississippi State in that wild 51-50 loss.

"I think everyone took our problems on pass defense personally last year, starting with this guy," Smith said, the smile gone for the moment. "If we don't execute and don't coach well we have a problem, and we all know that."

Smith took a small breath and added: "It takes all 11 players to have a good defense, whether it is passing or running, and I believe we will be better this season."

The Hogs did record 11 interceptions and most likely the defense's most complete game was at LSU when it allowed 271 yards passing but just one touchdown while holding Leonard Fournette to 91 yards on 19 carries.

More is expected of the defense this season because the offense must replace six experienced departed starters: three veteran offensive linemen, a fifth-year senior quarterback, a three-year running back and the best tight end in all of college football.

Replacing that kind of experience won't happen overnight, and that adds pressure to the defense.

It's a defense that was solid against the run last year and now needs to find a way to be just as good against the pass.

The coaching is there, and so is the experience. Now they just need to execute on every down.

Print Headline: No secret: Hogs' pass defense must step up