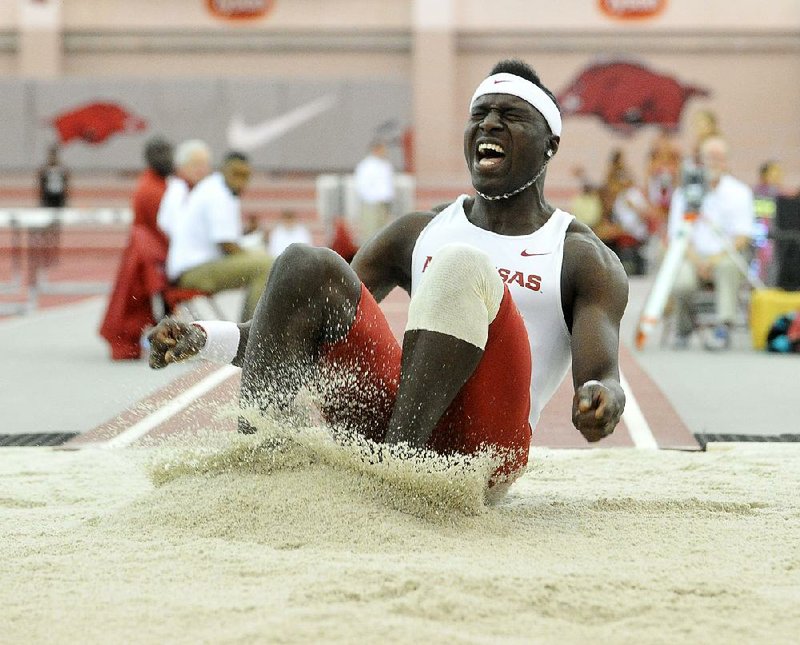 FAYETTEVILLE -- After Clive Pullen won the triple jump at the SEC and NCAA indoor meets and added the SEC outdoor title, he figured to cap his junior year at Arkansas by going 4 for 4.

"For sure," Pullen said. "I had intentions of sweeping."

Clive Pullen at a glance

NOTEWORTHY Will be a senior at Arkansas this year … Qualified for the Olympics by jumping a career-best 55 feet, 5 1/2 inches to win at the Jamaican National Championships. He surpassed the Olympic standard by two inches … In 2016 he won the SEC indoor and outdoor triple jump titles and the NCAA indoor title … Four-time All-American … majoring in computer engineering.


SCHEDULE: Interactive calendar of all events


THE TORCH: Details on this year’s torch, information on torchbearers, route of the torch relay

Unfortunately for Pullen and the Razorbacks, it didn't work out that way at the NCAA Outdoor Championships.

"I was feeling good," Pullen said. "The first jump was a big one and a marginal foul. The second one I over-rotated and kind of bailed on the jump.

"Then the third one was a big one again, but a foul. It was almost like I was in a dream. I couldn't believe what was happening at that moment."

[ARKANSANS IN RIO: Full coverage of 23 in Olympics]

Coming off a career-best leap of 55 feet, 3/4 inches at the SEC meet and ranking second nationally, Pullen struggled with a swirling wind in Eugene, Ore., and finished 23rd at the NCAA Championships on the final day. Between the two fouls, his lone legal jump was 49-3.

"I like contributing to the team's success," Pullen said. "I felt like with everyone doing so well that it was my turn to do something spectacular, too.

"I guess that got the better of me that meet."

If Pullen had finished first or second, he would have scored enough points for Arkansas to win the national championship. Third-place points would have allowed the Razorbacks to share the title with Florida.

"The NCAA outdoor was tough, but that's athletics," said Arkansas assistant Travis Geopfert, who coaches the field events. "You put yourself out there with high expectations, but sometimes things happen.

"The most impressive thing is Clive didn't let it defeat him. He responded in an unbelievable way."

Pullen responded to what he called a devastating performance at the NCAA meet by winning the triple jump at the Jamaican National Championships and qualifying for the Olympics. He went 55-5 1/2 in his hometown of Kingston to surpass the Olympic standard of 55-3 1/2.

Geopfert was at the National Stadium, coaching Pullen and cheering him on.

"I don't know if I ever wanted anything so badly for one person than I wanted Clive Pullen to make that Olympic standard," Geopfert said. "To get back up and show your true grit and the type of competitor and type of person that you are, it was an extremely special moment for that young man.

"Just watching it is something that I'll never forget."

Omar McLeod, a four-time NCAA champion for Arkansas who will compete for Jamaica in the 110-meter hurdles, is a close friend of Pullen's.

"Clive really dug deep and wanted to be an Olympian," McLeod said. "I knew he'd get it together."

Pullen, who will return to Arkansas for his senior year, said it was a struggle to regain his confidence after the NCAA outdoor meet.

"I knew I was physically ready, but the mental aspect was my major issue going into the Trials," he said. "I got lots of love from the coaching staff and medical crew just to regroup, and to know that what's behind is behind, and focus on the bigger fish to fry.

"To be able to get the Olympic qualifying mark on home soil, it was a great feeling."

Pullen is the first Jamaican man since Henry Jackson in 1972 to qualify for the Olympics in the triple jump.

"There was a little bit of pressure knowing it may have been the last meet to get in," Pullen said. "It really goes back to Coach Geofpy keeping me grounded.

"He just told me to focus on execution and the rest will take care of itself. He said, 'You've been training hard. It's there.' "

The triple jump qualifying round at the Olympics is Aug. 15 and the final Aug. 16

"On the world scene nobody expects him to go down to Rio and medal, but Clive is a competitor, man," Geopfert said. "Nothing would surprise me out of that young man.

"He wants to show the world what he can do."