Review: Twenty One Pilots at the Walmart AMP 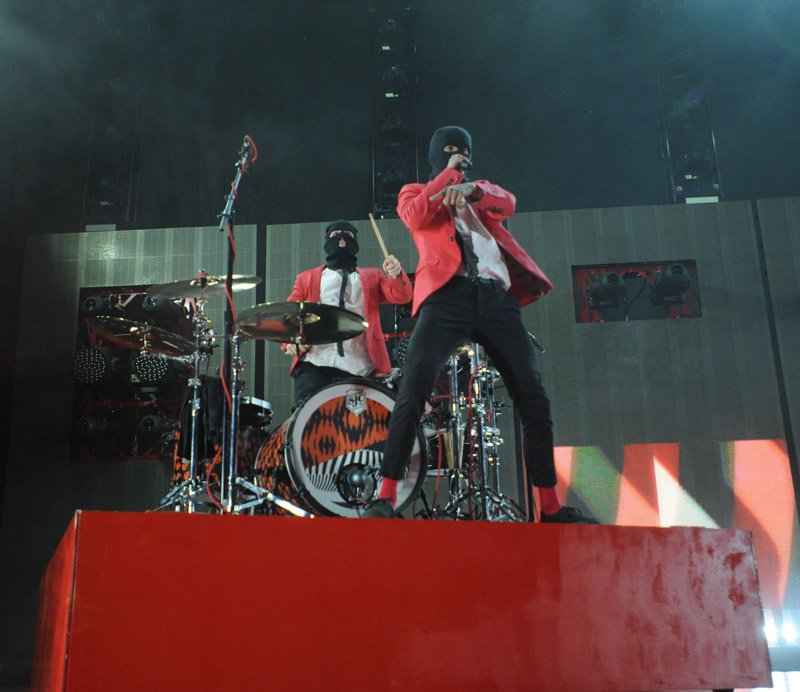 Tyler Joseph and Josh Dun have created something pretty incredible. The duo that is Twenty One Pilots is in the middle of their second worldwide tour — the “Emotional Roadshow” Tour — which began less than a month after wrapping their first international headlining trip with the “Blurryface” Tour. Consistently selling out venues as large as Madison Square Garden in New York City, it’s no surprise the group played for a sold out crowd of nearly 10,000 Wednesday night at the Walmart AMP in Rogers.

Perhaps a bit surprising though was the age diversity of the crowd. Whole families attended the concert, with moms and dads singing every word their teens and even younger children were also singing. This could be a case of parents knowing their child’s music and only being at the concert in a chaperone capacity, but I think the dancing, video recording and passionate singing of many of the parents in the audience suggests otherwise. I think it shows the duo has tapped into something that more than one type of person or age group can enjoy.

The musical style of Twenty One Pilots is difficult to confine to one or even two genres; “alternative tech-pop” and “alternative hip-hop” seem to come up often. Dun’s animated drumming lays a solid — but equally featured — rhythm for Joseph as he moves between the expressive lyrics of his verses and his almost sing-song style of rapping included in many of their songs. Joseph plays the piano, the electric keyboard, the bass guitar and the ukulele when he isn’t running across the stage or leaping through the air off the piano or Dun’s drum set. Their playing is filled in with backing vocals and music but if Dun and Joseph are on stage, you don’t notice anything but them.

I can truthfully say I’ve never seen anything like the show I saw Wednesday night. I suppose it all comes down to audience and performer, but I’ve never seen an act completely capture every person in the audience the way Twenty One Pilots did. The music was loud, but the unmistakable sound of thousands of people all singing the same thing was noticeable in every single song. Joseph let Wednesday’s crowd show off their love from time to time as he held the microphone out at them, letting them sing his words back to him. But he also did it when he interacted with the crowd — instructing them on when to jump up and down, when to wave their arms and when to sink as low as they could to then jump into the air all together when the beat dropped.

The two men kept up the high energy of the performance all the way to the end of the two-hour set. The crowd appreciated it, screaming with each acknowledgment from Joseph, each downbeat of the next song and each stunt performed by one of the artists. At one point, Joseph stepped onto the barrier separating the audience from the stage and knelt into the upturned hands of the crowd who held him up while he continued to sing. Later, Dun brought a small drum set on a platform down from the stage and was supported by the fans in the same way as he played the beats over the heads of the crowd. A human hamster wheel, Joseph inside, skimmed over those in the pit toward the end of the show. The crowd ate it up. Not afraid of using the space of the venue, a likely highlight for those packed tight on the lawn was when the duo ran up to a smaller stage outfitted with a drum set and electric keyboard right at the edge of the lawn where they played a lengthy medley of songs.

A handful of covers landed in the set when Dun and Joseph invited members from the opening acts, Mutemath and Chef’Special back to the stage to perform with them. The 11 rockers played snippets of The Top Notes’ “Twist and Shout,” Céline Dion’s “My Heart Will Go On,” Justin Bieber’s “Love Yourself” and House of Pain’s “Jump Around,” while hamming it up for some laughs from the audience. The two opening groups were a good match stylistically to pair with Twenty One Pilots. Chef’Special kicked off the evening with the energy and gratitude of a band happy to be part of such a monumental tour. After a short set change, alternative rockers Mutemath had a handful of people beyond the pit on their feet, but most people were content to nod or sway along to their music. Despite it being nearly impossible to understand lead singer Paul Meany between the intense bass and him pulling away from the mic while singing, most of the crowd recognized and sang along with their final number and one of their most well-known songs, “Monument.”

As far as Twenty One Pilots’ most well-known songs, a newcomer wouldn’t have been able to guess what they were just by listening to the audience. It seemed every person knew every word to every song. And the beauty of that did not escapeJoseph. During the encore — which followed the group’s biggest radio hits including “Stressed Out,” “Tear in My Heart” and “Car Radio” — Joseph addressed the crowd with sincere gratitude.

“I started writing songs because I didn’t know how to say the things I wanted to say in normal conversation. I still have those moments — like this — where I don’t know how to find the words to tell you guys how grateful I am for all of you…” and the rest was drowned out by another massive cheer.

Correction: A previous version of this story had switched the last names of the two performers in several sentences. The names have all been corrected.

Print Headline: Review: Twenty One Pilots at the Walmart AMP