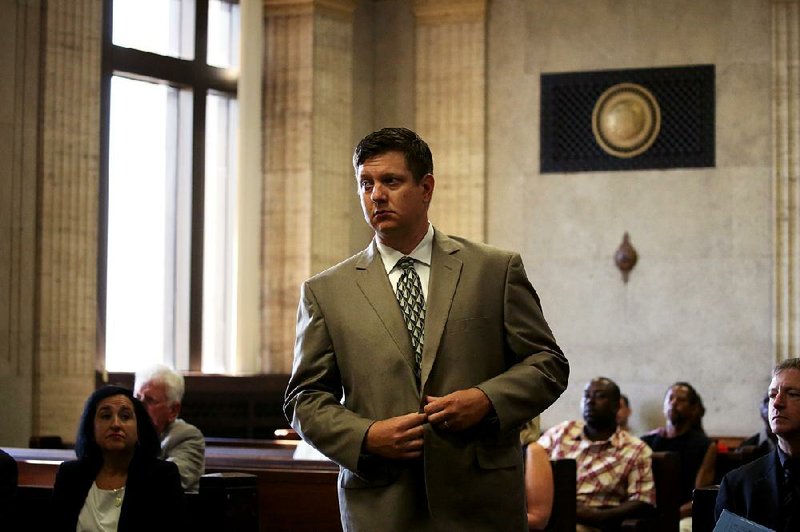 Officer Jason Van Dyke, who faces a murder charge in a 2014 shooting, approaches the bench during a hearing Thursday in Chicago.

CHICAGO -- A judge on Thursday appointed a special prosecutor to handle the murder case against the white Chicago police officer who shot a black teenager 16 times, video of which led to protests and the eventual ouster of the city's police superintendent.

After the hearing, McMahon told reporters that three prosecutors from Kane County and one from Winnebago County will assist him in the case.

"I and this team have one goal in this case, that is to find the truth, to present the truth and ask that justice be served in this case," he said.

Chicago Police Union President Dean Angelo said he did not know anything about McMahon.

In a statement, attorneys who pushed for a special prosecutor said they were dismayed by the choice of McMahon.

"Given the high number of qualified attorneys in Cook County who have the experience, resources and who are fully independent of law enforcement, we're surprised and disappointed that all of them have been passed over," they said.

The appointment comes as the city scrambles to regain public trust in the Police Department and Mayor Rahm Emanuel. Earlier Thursday, the city said it plans to take the unprecedented step of releasing video of a fatal police shooting just days after it happened.

The planned release at 11 a.m. today of videos related to last week's fatal shooting by police of 18-year-old car-theft suspect Paul O'Neal would conform to a new city policy requiring the release of relevant video within 60 days of a police shooting.

That policy was adopted after the outpouring of anger of the city's efforts to keep the McDonald video from going public. In June, the city released more than 300 video clips of police shootings and other encounters. But those videos, though they involved open investigations, were months and sometimes years old and not just days removed from a police shooting.

Superintendent Eddie Johnson stripped three officers of their police powers after officials said a preliminary determination concluded they had violated department policy in the July 28 shooting.

An autopsy showed that O'Neal of Chicago died of a gunshot wound in the back during a stolen-vehicle investigation. And police have announced that a body camera of an officer involved in the shooting was not recording at the time.

Thursday's appointment of McMahon comes weeks after Cook County State's Attorney Anita Alvarez -- who lost her primary election in March as criticism arose of her handling of the McDonald case -- requested that a special prosecutor handle the politically charged case. Just days ago, a different judge appointed another special prosecutor to investigate whether other officers at the scene tried to cover up the shooting.