Pieces picked up in Palmyra 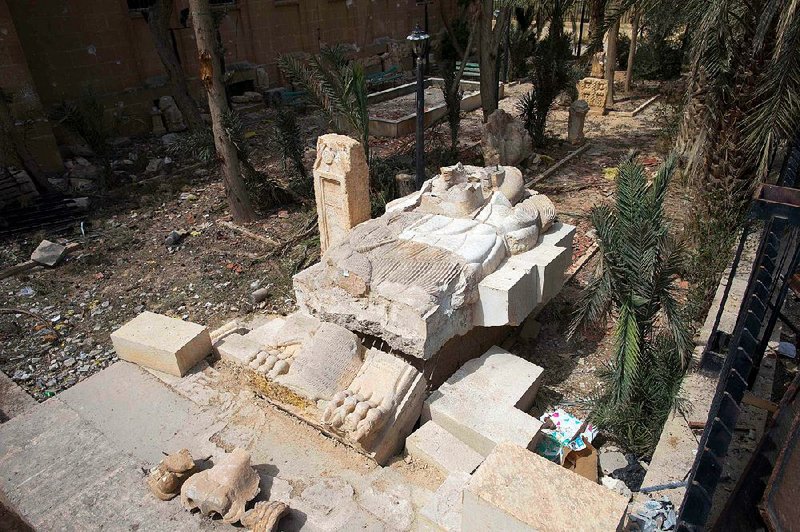 The 2,000-year-old Lion of Allat statue lies broken Thursday outside the museum in Palmyra, Syria. Islamic State militants defaced the statue and used bulldozers to topple it.

DAMASCUS, Syria -- The first foreign experts who visited the museum in Palmyra after it was taken over from Islamic State militants said they spent a week collecting broken fragments of priceless sculptures from the museum grounds and preparing them for transport to Damascus.

Back in the Syrian capital Saturday, they offered grim new details about the extent of the destruction caused by the extremists during their 10-month stay in the ancient town.

The museum was trashed, and some of its best-known artifacts and statues were smashed by the militants, who cut off the heads and hands of statues and demolished others before being driven out last month.

Bartosz Markowski, from the Polish Archaeological Center at the University of Warsaw, said that most of the 200 objects that were exhibited on the ground floor of the Palmyra museum were destroyed, many of them apparently with hard tools like hammers. Many artifacts have been stolen, he added, though it was not possible to know how many.

He said he and his colleagues were the first specialists to visit Palmyra after it was taken over by the Syrian army, and spent a week working and assessing the damage.

"We collected everything we could. The fragments were spread around the whole museum among broken glass and furniture ... It is a catastrophe," he told The Associated Press in the garden of the National Museum in Damascus.

During their rule of Palmyra, the extremists demolished some of the most famous Roman-era monuments that stood just outside the town, including two large temples dating back more than 1,800 years and a Roman triumphal archway, filming the destruction themselves for the world to see. The sprawling outdoor site, a UNESCO world heritage site, as well as the museum were among Syria's main tourist attractions before the civil war.

Among the best-known statues destroyed was the famous Lion of Allat, a 2,000-year-old statue that previously greeted visitors and tourists outside the Palmyra museum. The statue, which used to adorn the temple of Allat, a pre-Islamic goddess in Palmyra, was defaced by Islamic State militants and knocked over by bulldozers.

On a visit Thursday to Palmyra, AP reporters saw the statue lying outside the museum building with its face cut and some of its broken pieces lying next to it.

"Fortunately we collected most of the fragments, and I hope it can be reconstructed very soon," said Markowski, who in 2005 took part in a Polish archaeological mission that did renovation work on the statue.

His colleague, Robert Zukowski, said the limestone lion statue should be the first thing restored and "it should stay in Palmyra as a sign of resistance against the barbarians. "

In addition to the damage inflicted by the Islamic State, Markowski said the museum building has suffered structural damage from bombs.

"There's broken ceilings, broken walls, roofs, a lot of garbage and fragments of bricks everywhere, and among that there are fragments of sculptures," he said.

He said the restoration will require a huge international effort and years to accomplish.

"I think most of the objects can be restored, but they will never look as they did before," he said.