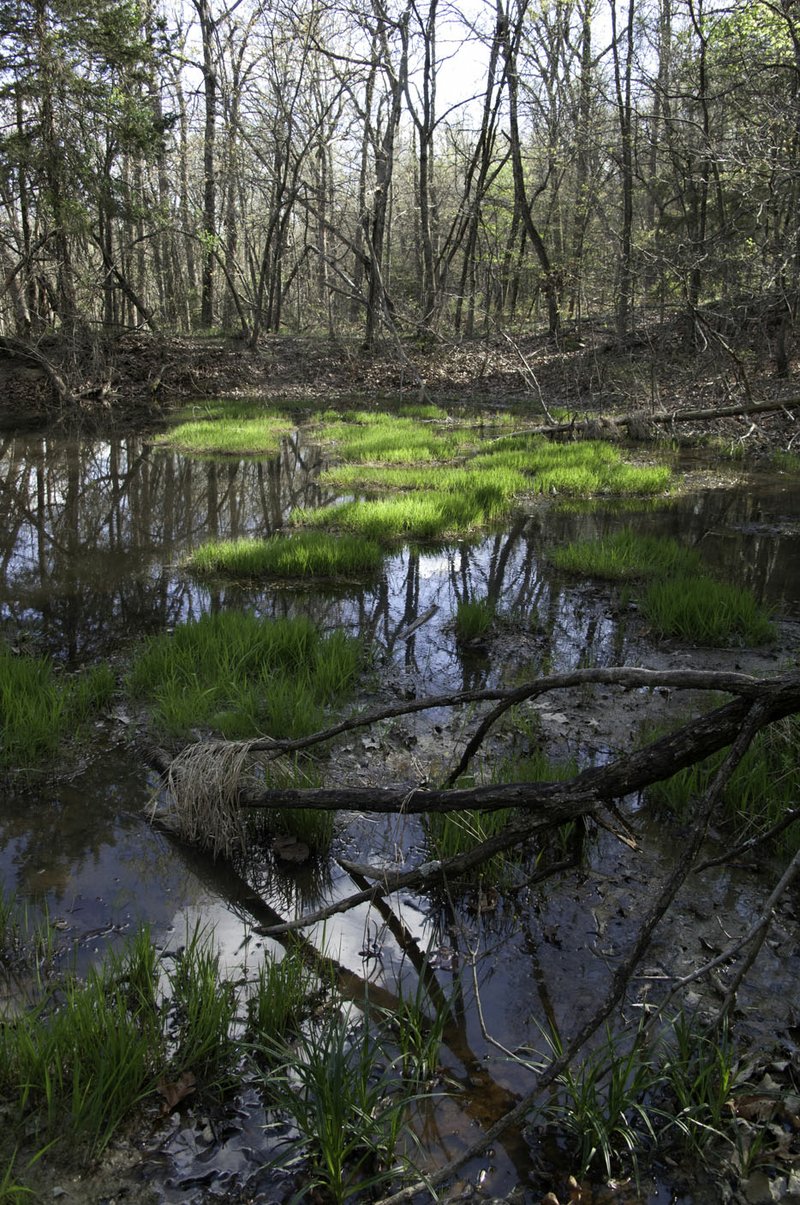 Sunlight falls on clumps of rice cutgrass Wednesday in one of a handful of ponds in the Kessler Mountain nature preserve in southwest Fayetteville. City officials this week will consider a plan meant to double the trails on the property while preserving its natural diversity and beauty.

FAYETTEVILLE -- The city's plan to double the length of hiking and biking trails within its 390-acre Kessler Mountain property while preserving the area's natural beauty is set for its final round of public comment.

The final draft of the Kessler Mountain Trails Master Plan will be presented to the city's Parks and Recreation Advisory Board on Tuesday at City Hall. If the board endorses the plan, it could go before the City Council for final approval by early next month. Both meetings are open to the public and give residents a chance to weigh in.

Fayetteville Parks and Recreation Advisory Board

• On the agenda: The final draft of the Kessler Mountain Trails Master Plan

The draft plan shows about 7 miles of new trail loops designed for a variety of skill levels and coiled around the eastern flanks of the 500-foot plateau, which stands just west of Cato Springs Road in the city's southwest corner. About 6 miles of more difficult, volunteer-built trails that have threaded along the mountain's length for years would be repaired and rerouted.

All of the trail work, trailheads and parking would cost about $900,000 and take less than nine months with a single crew, according to a report attached to the trail plan. The project would complement the development of the city's 200-acre regional park, which sits immediately east of the mountain preserve and is where several soccer and baseball fields are set to open this fall. One of the baseball parking lots would be the primary trail hub, according to the plan.

Wednesday afternoon, the regional park rumbled with construction and field lights towered overhead, while the trail was relatively quiet, used by a handful of runners, hikers and a lone mountain biker. The construction noise stopped as the evening wore on, leaving the rustling of the wind and squirrels and birds. Sunlight slanted between the new oak and maple leaves.

The city has a temporary grass trail running along the regional park's northern boundary to the existing trails, and jogger Chris McNamara was there preparing for one of his regular runs to the mountain's west side. A greater variety of trails will be good for the area, he said.

"Obviously, the park is intended for a lot of different families and that sort of thing," McNamara said. The most difficult trails will still be there, he added with a smile.

The Kessler trails would give provide access to a diverse, complex ecosystem that nearby residents and city officials have long called a regional treasure. Hundreds of plant and animal species live among the mountain's bluffs, streams and centuries-old oak trees, according to the trail plan report.

"Some people wanted more trails and other people wanted fewer trails, and they came up with a good compromise," said Frank Sharp, whose property leads to one of the existing trails. He and others have pushed the city for more than a decade to protect the land. Now that the final plan is in sight, Sharp said, "I'd say it's 10 times more than what I had hoped for. It's just really amazing."

Fayetteville bought the land in March 2014 for $3 million, with the Walton Foundation covering half of the bill. The Fayetteville Natural Heritage Association committed to pay the city about $300,000 to help offset the city's $1.5 million.

Overall trail use doubled after the purchase to more than 1,000 users a month, according to logs kept by the city and Sharp at their respective trailheads.

The city last week accepted a $2 million grant from the Walton Family Foundation covering half the cost of building a paved trail from southern Fayetteville neighborhoods to the regional park as well. The project should be completed next year, according to the grant's timeline.

McNamara, 31, said he used to live in Seattle and recalled parks there required decades of planning and work. They became part of the city's identity as the city grew around them, he said.

"This is something that you plan ahead for the next stages of the city," he said of Fayetteville's projects. "I'm excited. I think it'll be a good thing for a long time."