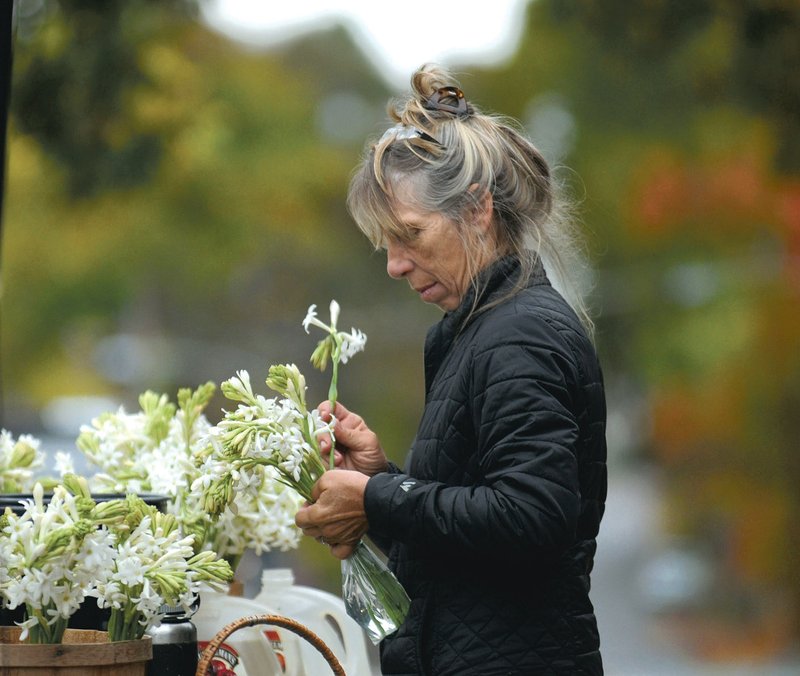 Terri Bitting of Plentygood Farm in Springdale prepares bouquets for sale at the 2015 Fayetteville Farmers’ Market.

Yin and yang. Old and new. The mother tree and the seedling. 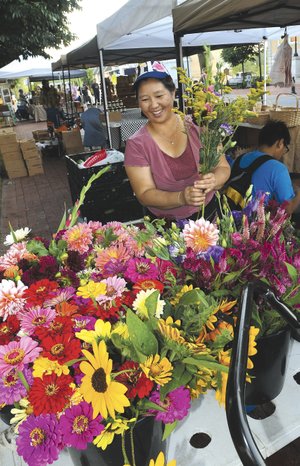 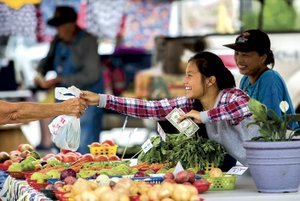 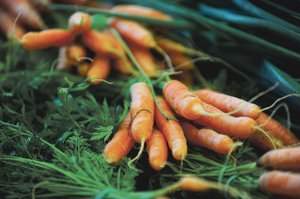 Photo by Andy Shupe
Carrots from NWA Natural Produce in Lincoln are on display at the Fayetteville Farmers’ Market Winter Market, which ended March 26. The market returns to the square on Saturday. 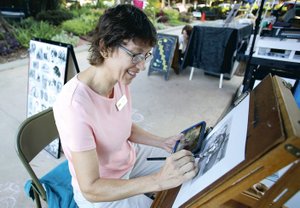 Photo by David Gottschalk
Amy Edie of Fayetteville works on an animal portrait last year at the Fayetteville Farmers’ Market. The eclectic mix of food and fun is the standard for Northwest Arkansas farmers markets.

There's a new kid in town, but the grand dame of Northwest Arkansas farmers markets is alive and well, too.

Green Forest Farmers Market — 7 a.m.-noon Wednesdays starting May 4 on the square. facebook.com/GreenForestFarmersMarket or 870-654-5589.

Newton County Farmers Market — 3-6 p.m. Fridays on the square and 9 a.m.-noon Wednesdays at the Extension Office starting April 15. 870-446-2240 or facebook.com/NewtonCountyFarmersMarket.

Founded in 1973, the Fayetteville Farmers' Market has nearly doubled in size since she moved to Northwest Arkansas in 1991, says Teresa Maurer, its vendor coordinator.

This Saturday, the market will open at 7 a.m. with 70 vendor spots full, offering everything from asparagus to jams and jellies to arts, crafts and coffee.

What makes the market the standard by which others in the region are judged is the atmosphere that eclectic mix engenders.

"It sort of crosses the line between farmers' market and entertainment venue," Maurer says, with music, arts and crafts, jugglers, conversations, dog walking and special events all happening at any given time. This year, she says, the "big new thing" is cooking demonstrations on the first Saturday of each month, May through October, at the entrance to the Town Center plaza.

"It'll be a chance for people to actually see somebody preparing things available at market that day and giving recipes," she says. "We had that on special event basis, but this year, we're able to do it once a month. Our emphasis is something anyone can do. It will be fun to have a chef talk about it -- and we'll have different chefs -- but it will be something people will see and think, 'Oh, I can make that!'

Of course, the weekday markets will also continue, starting at 7 a.m. Tuesdays and Thursdays; Kids' and Seniors' Day will be June 16; and the Salsa Fest is set for July 16 -- at the beginning of tomato season, Maurer says.

There is only one aspect of the Fayetteville tradition that Maurer can't explain.

"I don't know how the dog thing got started," she says, "but they're part of the character of the market."

She won't say it wasn't, either.

"Springdale has had a market for years and years, and it was a great place to get produce," says the new market manager. "But the Mill Street Market really came from wanting more of an event type market in Springdale -- a place to go and spend time, to connect with our community -- a place you know you can go and get coffee and see your friends.

"On a practical note," she adds, "urban farmers need places where we can sell to the community."

Selvey and her husband, James Selvey, consider themselves urban farmers, but they've never sold at a market before, just directly to customers. "So we have a lot to learn!" Gardening is, however, a family tradition for Selvey, learned at the knee of her grandfather, Dean Fanning, who is now 81.

"He's my inspiration, always has been," she says. "Gardening and growing food have always been a part of my life."

When she was employed full time, Selvey says she was a container gardener. But after adopting her son in 2009, gardening was "a practical solution to being able to feed our family healthier food." Now she's a Master Gardener, and her husband a Master Gardener trainee.

"Maybe it's just an innate love of being outside," she muses. "I never had to work in the garden as a kid. I just enjoyed walking around the garden with my grandfather and eating and watching the birds and squirrels. It's still magical to me to watch a seed become something you can feed your family."

And what better way to share that magic than a farmers market?

"We had talked about this with friends for a long time -- but I kept hoping someone else would do it," she says with a laugh. "It's a big undertaking!

"When I finally pitched the idea to the city, it was so much easier than I expected. It wasn't a battle at all. And we have a beautiful location."

The market will take up a portion of Mill Street and Johnson Avenue, across the boardwalk from the Shiloh Museum of Ozark History. Selvey promises visitors can spend the morning perusing produce, meats, cheeses, baked goods, "fantastic" homemade pies, some craft items, jewelry and handcrafted handbags.

"Come down, meet the farmers, ask them how to cook their lamb meat or what to do with the strawberries fresh today," she suggests."It's a community building market."