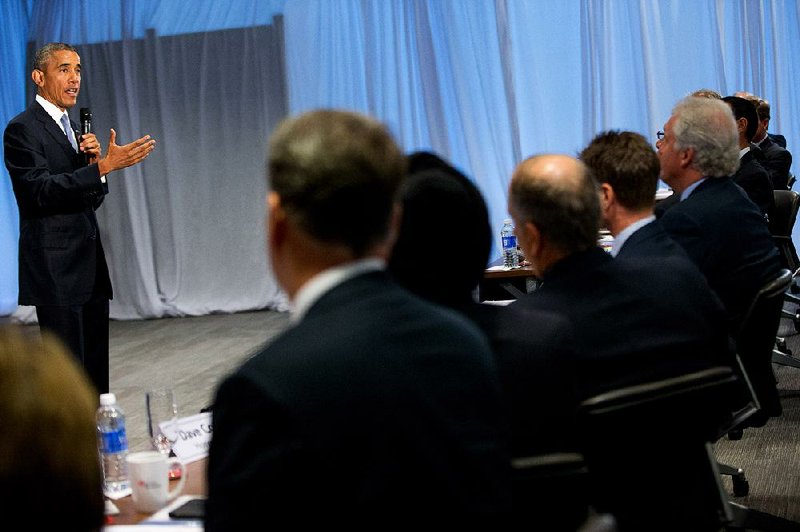 Speaking to business leaders Wednesday in Washington, President Barack Obama renewed his call for increased spending on infrastructure and education and pointed to higher taxing of “carried interest” as a potential revenue source.

WASHINGTON -- President Barack Obama urged Congress on Wednesday to avoid another contentious budget showdown and warned the economy would take a hit if the government shuts down again.

Obama blamed Republicans for the shutdown two years ago and made clear he would again.

A partial shutdown will occur Oct. 1 unless lawmakers provide money to keep the federal government functioning. To reach a deal, the GOP-led Congress must negotiate opposition from some conservatives who want to block federal funding for Planned Parenthood.

During a speech to the Business Roundtable, Obama also pointed to a potential revenue source to pay for some of the increased investments he wants in infrastructure, education and scientific research -- taxing so-called carried interest as ordinary income rather than as a capital gain, which is taxed at a lower rate.

The proposed change is aimed primarily at managers of some types of private investment funds who pay a lower tax rate on their incomes than many individuals do. He noted, without naming them, that some Republican presidential candidates have voiced support for increasing taxes on carried interest.

"If we close the tax loophole, we could double the number of workers in America's job-training programs; we could help another 4 million more students afford college," Obama said.

This approach "is an example of how we can maintain fiscal responsibility while at the same time making the investments that we need to grow," he said.

Obama described many of his proposals as "no-brainers." He said the failure to act on them was "primarily because a faction within one of our parties has gone off the rails and sees a conspiracy around everything, or simply is opposed to anything I propose even if they used to propose it. That's a problem."

Even as there's no progress on Capitol Hill toward passage of a stopgap funding bill, top Senate Republican Mitch McConnell of Kentucky again promised Wednesday that there will not be a government shutdown. He dismissed once again a strategy by House tea partiers to try to tie government funding to legislation to take away federal funding of Planned Parenthood.

"We're not going to engage in exercises in futility," McConnell said.

He made his comments even as the Senate moved forward with votes against the Iran nuclear deal and on abortion. There was little sign in either chamber that a budget deadline loomed.

Senate Democratic Leader Harry Reid of Nevada said he was heading to the White House todayalong with House Minority Leader Nancy Pelosi for talks with the president.

The House's No. 2 Democrat, Steny Hoyer of Maryland, said Democrats would be willing to advance a temporary governmentwide funding bill provided they can strike an agreement with Republicans.

But Republicans are looking for a longer stopgap spending bill than Democrats want. Democrats fear a lengthy stopgap measure would make it more difficult to strike a deal to reverse automatic spending curbs.

Obama also said the economy is doing better than those countries that have embraced spending cuts to climb their way out of tough economic times, and that the "perennial gloom and doom" descriptions are perpetuated by presidential campaigns that are seeking to succeed him.

The Business Roundtable is made up of CEOs from large corporations.

Meanwhile, on Capitol Hill, Democrats ramped up pressure to reauthorize the Export-Import Bank, which helped finance purchases of U.S. exports before the expiration of its charter in June after opposition from conservative Republicans.

Hoyer told reporters that he's hopeful, based on a conversation this summer with House Speaker John Boehner, R-Ohio, that Boehner supports renewing the bank. General Electric on Tuesday cited the bank's expiration as a reason for transferring about 500 jobs to overseas affiliates.

Information for this article was contributed by Nancy Benac, Erica Werner and Andrew Taylor of The Associated Press.