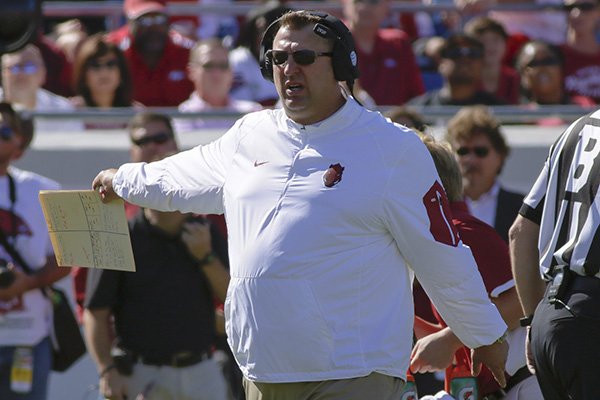 FAYETTEVILLE -- Arkansas Coach Bret Bielema spent a considerable portion of his Monday news conference detailing the issues that led to the Razorbacks' 16-12 loss to Toledo on Saturday.

Bielema's takeaway: "That was a textbook definition, in my opinion, of how you lose a football game."

Bielema pointed out Arkansas' inability to establish its running game, particularly in the red zone, a variety of missed plays that could have turned the game's momentum, giving up third-and-long conversions to the Rockets and the Razorbacks' spate of penalties.

"Our offense functioned really well in the two minute, we just couldn't get in the end zone," Bielema said. "We definitely have got to be able to run the football. That's an emphasis in our program that has got to come to light more than at any time ever before."

Bielema said the team's mistakes were pointed out in meetings on Sunday, but not to where they descended into rampant negativity.

"Before we go into meetings, I go 'Listen, there's a lot of people that would turn this into ... a coming after you 100-percent session,' " he said. "I mean, we let them know that what we saw is not acceptable, but it didn't turn into a discussion of your ancestry and 'What kind of person would do this?' It was more, this could be one of the greatest learning days of your life."

Texas Tech Coach Kliff Kingsbury, speaking on the Big 12 coaches teleconference, said he couldn't comment on any issues with the Arkansas run game "because they rushed for about 800 yards on us last year."

The Razorbacks, who host Texas Tech on Saturday at 6 p.m. at Reynolds Razorback Stadium, piled up 438 rushing yards, including 212 by Alex Collins, to beat Texas Tech 49-28 last year in Lubbock, Texas.

Kingsbury said the Razorbacks were a very different team to prepare to play.

"The only one that comes to mind, I guess, would be Kansas State," he said. "They're still not exactly like Arkansas by any stretch, but a very run-first, two tight ends, two running backs type offense."

Arkansas Coach Bret Bielema did not mention Ohio State by name, but he did make reference to a feat accomplished by the Buckeyes last season that he hopes can apply to his Razorbacks. Ohio State lost early to Virginia Tech, but went unbeaten the rest of the season to claim the first College Football Playoff national championship.

"I'm not going to comment on anybody else's schedule, obviously, but there's teams as recently as last year where you lose to teams early and you can bounce back and have success," Bielema said. "We lost some games last year that could have taken your heart and soul and came back, and hopefully we finish a lot better than that."

Arkansas' game against Texas A&M on Sept. 26 in Arlington, Texas, will kick off at 6 p.m. or 6:30 p.m. on either ESPN, ESPN2 or the SEC Network, the league announced Monday. The final determination will be made early next week.

Bret Bielema said tight ends coach Barry Lunney Jr. dropped him a note about how the Razorbacks in 1995 rebounded from a 17-14 season-opening loss to SMU to win Arkansas' first SEC Western Division championship.

"Barry himself fumbled on like the 2-yard line on a quarterback sneak," Bielema said. "He kind of put that in a note to me ... and I'm probably going to let him share that with the players, because those are things that if there's ever a greater indicator of the future it's history."

Lunney did not start against SMU that season, but went on to start the final 12 games during his senior year.

Arkansas coaches said the team's holding calls would be stressed this week. The Razorbacks had four holding calls against Toledo that impeded drives, took back a Jared Cornelius punt-return touchdown and nullified an Alex Collins run to the 1.

"We talked about that for a long time," offensive coordinator Dan Enos said. "How do we fix those things? Is it a lack of fundamentals that they have at times that causes us to hold?

"Is it laziness? Is it not anticipating something and we get a presnap key and didn't see it? What was the reason? Every one is a little bit different, but we're looking at and evaluating that."

Bielema said the holding calls from Arkansas' first two games can have a ripple effect.

"Unfortunately now, as a team, with as many holding calls as we received in the first two ball games, you're kind of labeled as that," he said. "And we need to erase that label."

The foot injury to Keon Hatcher, which will put Arkansas' top receiver on the shelf for at least six games, has sent redshirt freshman Jojo Robinson into a starting role at slot receiver and create a domino effect on the roster.

Bret Bielema said sophomore Kendrick Edwards, who has not played the first two games while being targeted for a redshirt season, will probably now join the playing rotation, and players like Cody Hollister and Damon Mitchell will probably take more work behind starters Jared Cornelius and Drew Morgan.

Toledo was named Monday as the team of the week as selected by the Football Writers Association of America. The Rockets scored their first victory over an SEC team and their first on the road over a top 25 team in their 16-12 decision over No. 18 Arkansas. The Rockets had been 0-14 on the road against top 25 opponents.

Coach Bret Bielema and defensive coordinator Robb Smith noted on Monday that offenses have determined they need to release the ball quickly in the passing game against Arkansas.

"There is a certain flavor against us right now where there's a quick-game element where even when we bring pressure the ball is going to get out quick," Smith said.

Texas Tech has a quick-game approach in its offense, as well as a variety of deeper drops and moving pockets for quarterback Patrick Mahomes.