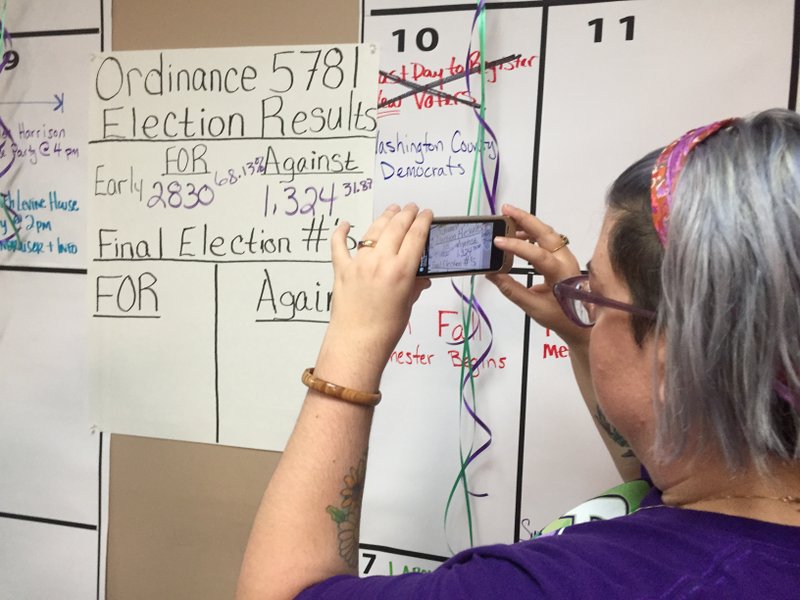 Early and absentee results in an election on Fayetteville's civil rights ordinance.

Final but unofficial results from the Washington County Election Commission showed 7,666, or 52.8 percent, of voters cast ballots in favor of the contentious anti-discrimination law, and 6,860, or 47.2 percent, voted against it.

The ordinance is scheduled to take effect Nov. 7, provided it withstands a legal challenge from Protect Fayetteville, the group that has advocated against the pro-LGBT law.

“I think this says that Fayetteville voters really are fair and inclusive folks,” said Kyle Smith, president of For Fayetteville, shortly after election results were announced. “I think we proved tonight that this is the Fayetteville we all know and love.”

The Uniform Civil Rights Protection ordinance prohibits discrimination in employment, housing and places of public accommodation on the basis of sexual orientation and gender identity. It creates a seven-member, City Council-appointed Civil Rights Commission to review complaints. Violators are subject to fines of up to $100 for the first offense.

Gilbeau said he thought the previous referendum, in which residents were asked to vote for or against repeal instead of for or against the ordinance in question “was obviously worded in an attempt for confusion.”

About 13 more people cast ballots in Tuesday’s election than in a Dec. 9 referendum, when nearly 52 percent of the 14,580 residents who voted called for repeal of an earlier anti-discrimination proposal.

Even with Tuesday’s election result, the future of the Uniform Civil Rights Protection ordinance is unknown.

Protect Fayetteville representatives on Aug. 31 filed a lawsuit seeking to void the ordinance. The group alleged the ordinance was improperly referred to voters at a June 16 City Council meeting. And, they claimed, the ordinance is illegal under Act 137, which prohibits cities and counties from enacting or enforcing legislation “that creates a protected classification or prohibits discrimination on a basis not contained in state law.”

Washington County Circuit Judge Doug Martin, as of Tuesday, had not set a court date to hear arguments in the case.