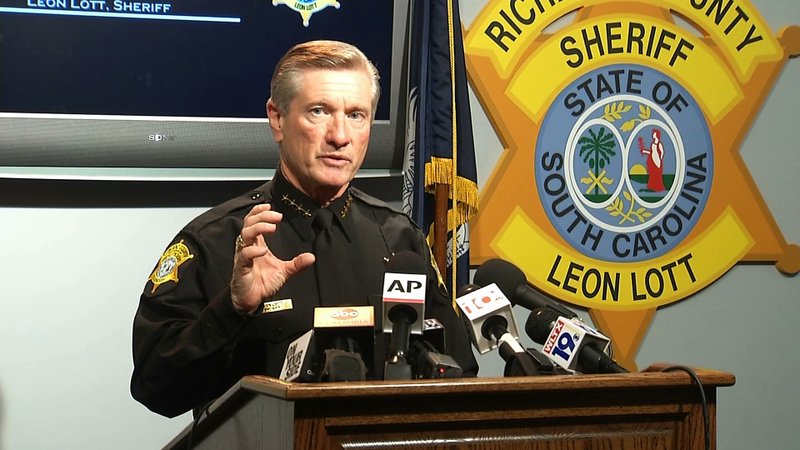 COLUMBIA, S.C. -- Richland County Sheriff Leon Lott returned home from a gathering of law enforcement leaders to an uproar over images of a school resource officer flipping a 16-year-old girl out of her desk and dragging her across the floor of her classroom Monday at a high school in Columbia.

In announcing the deputy's firing two days later, Lott called on the public to shoot more video, not less.

"I would hope that every citizen that has a cellphone that has a camera on it, if they see something that's going on and they have questions about it, they need to film it," Lott said Wednesday. "Our citizens should police the police. That's their job, too."

Lott's comments -- one questioning whether video is causing a chilling effect, another saying it only can help -- are the latest contribution to an intensifying debate over the role of cellphones in policing. They come at a moment when departments are working to clamp down on violent crime and repair fractured trust with the public. And they hint at a possible disconnect between beat cops and the brass on the effect of such footage.

The U.S. Department of Justice has begun a civil-rights investigation into the South Carolina school video, the most recent example of how civilian-shot footage of police encounters is inspiring not just anger but criminal investigations.

In June, 0fficer Michael Slager in North Charleston, S.C., was charged with murder after a witness captured video of him shooting Walter Scott, an unarmed black man, in the back as Scott was running away. In July, a University of Cincinnati police officer was charged with murder after he was caught on video fatally shooting Samuel Dubose, an unarmed black man, during a traffic stop over a missing license plate. And on Monday, Baltimore's top prosecutor announced assault charges against a police officer who was seen on video spitting on a detainee who was handcuffed on the floor.

Addressing a law enforcement conference last week in Chicago, FBI Director James Comey suggested that the pervasiveness of smartphones could be inhibiting officers' ability, or at least their willingness, to fight crime; officers who feel as if they're constantly being watched could be less aggressive and less likely to walk their beats, engage with the public and use force when necessary.

"In today's YouTube world, are officers reluctant to get out of their cars and do the work that controls violent crime? Are officers answering 911 calls but avoiding the informal contact that keeps bad guys from standing around, especially with guns?" he said. "I don't know."

Rich Roberts, a spokesman for the International Union of Police Associations, said the climate surrounding police, including ubiquitous cellphone recording, is affecting how officers do their jobs.

"They are under more subjective emotional scrutiny than they've ever been," he said. "They're dealing with a more hostile public. Officers will be more cautious in their approach, and that's not necessarily good police work."

But Jim Pasco, executive director of the National Fraternal Order of Police, took issue with the notion that hands-off policing is contributing to spiking crime.

"It puts added stress on police officers in already stressful situations, but we're not worried that they're not doing their duty," he said.

Asked Thursday about Comey's comments, Lott said officers generally shouldn't fear being filmed as long as they're not misbehaving. He acknowledged that some officers worry they'll get in trouble anyway based on a few seconds of footage of normal, acceptable tactics that civilians might find jarring.

"What cops are scared of is sometimes the video shows a snapshot and not the whole picture," Lott said, "and that snapshot tends to form public opinion when the facts of the whole situation are not known."

Baltimore Police Commissioner Kevin Davis assumed the position after his predecessor, Anthony Batts, was fired in July in the aftermath of riots over the death of Freddie Gray, a 25-year-old black man who suffered a lethal spinal injury in police custody.

Davis has stressed the importance of video as a means of building public trust and holding both civilians and officers accountable. But whether rank-and-file officers share the willingness to be recorded is unclear.

By February, Baltimore will equip with a body camera every officer who comes into regular contact with the public, a program that rolled out Monday with a pilot effort in which 155 officers will wear body cameras for 54 days.

But only some of the officers taking part in the test volunteered for it; the rest were selected by their supervisors.

Roberts said every officer has a different view.

"In many cases they will exonerate an officer against false accusation, and that's a big plus," he said. "Downside is interpretation. Who is interpreting it? Are they doing so in an emotional manner or an objective manner? The bottom line is: There's no consensus."