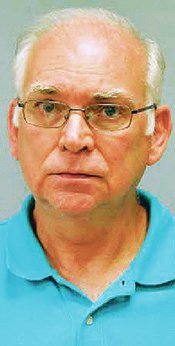 Almond, 62, of 40 Brentwood Drive in Bella Vista, teaches computer and business classes for grades 9 through 12 at Gravette High School, according to a Bentonville Police Department news release.

A student looking to earn extra money agreed to help Almond pack and move on Monday, according to a probable cause affidavit for Almond's arrest.

The student arrived at Almond's home about 7:30 p.m. and the two started packing. They went inside to take a break, according to the police report. The student later told police they sat down on a small couch with the television playing and it felt awkward. The police report doesn't indicate the student's age or gender.

Tuesday afternoon police recorded a phone call between the student and Almond where Almond said he touched the student's crotch area, but it wouldn't happen again and urged the student not to say anything about it, according to the police report.

He told police there was no sexual context to the interaction, and he was trying to teach the student a lesson about what may happen at parties, according to the police report.

Almond told police he has taught at Gravette High School for 25 years, according to the report. State licensure records show Almond is certified to teach business technology, business education and middle school social studies at the Gravette School District.

A teacher page for Almond on the Gravette School District website said Almond teaches computer business applications, Accounting I and Accounting II and is the adviser for Future Business Leaders of America. A school guide lists him as the contact person for seventh- through 12th-graders for the business club.

Almond was listed as 2014-2015 executive director for the Arkansas Association for Career and Technical Education board, an association of educators in the state.

A no-contact order included in Almond's court paperwork requires him to stay away from Gravette High School and the teen's home.

Gravette Superintendent Richard Page confirmed Wednesday that Almond had been placed on a paid leave of absence pending further investigation.

"The Gravette School District believes that teachers are innocent until proven guilty and that the safety of our students is the highest priority," Page said in a statement Wednesday.

The investigation into Almond involved the Bentonville, Bella Vista and Gravette police departments and is ongoing, according to the Bentonville news release.

Almond was being held Wednesday in the Benton County Jail with no bond set, although police requested bond set at $75,000. He will appear in court Dec. 7.