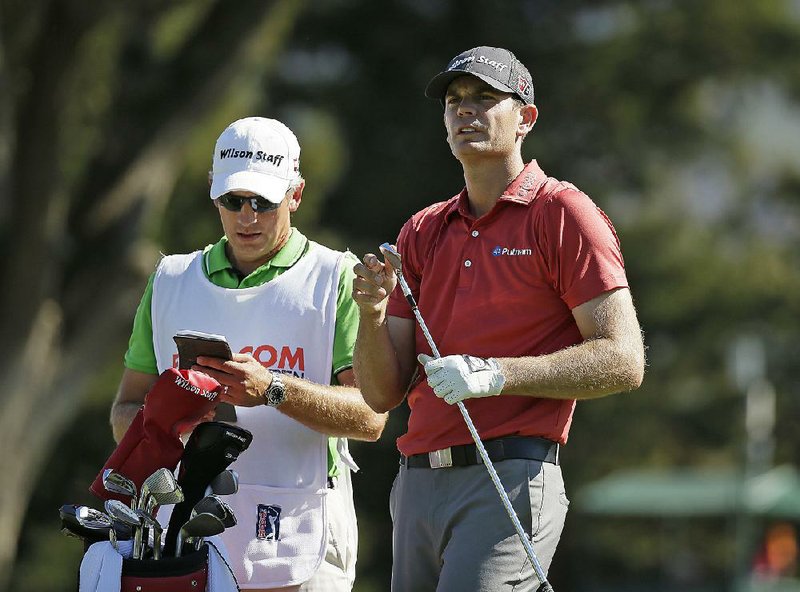 Brendan Steele waits to hit from the second tee of the Silverado Resort North Course during the second round of the Frys.com PGA Tour golf tournament Friday, Oct. 16, 2015, in Napa, Calif. - Photo by AP / Eric Risberg

NAPA, Calif. -- Brendan Steele did just enough to keep the lead Saturday in the Frys.com Open.

He just missed a chance to do a lot more.

As one player after another piled up birdies on the closing three-hole stretch at Silverado -- eagle opportunities on each hole -- Steele had to settle for three pars for a 3-under 69 and a one-shot lead over Andrew Loupe and Kevin Na.

The PGA Tour season opener was wide open going into the final round with 16 players separated by only four shots.

Steele is at 14-under 202 as he tries to go wire-to-wire and pick up his second PGA Tour victory.

He could have made it easier on himself over the closing holes. Steele couldn't get up-and-down from a bunker on the par-5 16th. His tee shot was slightly pulled and bounced out of a tree back to the fairway and short of the green on the 296-yard 17th hole, and he could get no closer than 20 feet with a wedge on the par-5 18th.

"It's frustrating, because I thought I hit some good shots and good putts," Steele said. "It happens."

Two PGA Tour rookies were among the eight players two shots behind at 12-under 204. Emiliano Grillo of Argentina, coming off a victory in the Web.com Tour Championship two weeks ago, went eagle, birdie, par for a 65. Harold Varner III played that stretch in 1 over, having to scramble for a par on the 17th and missing the 18th green long with a wedge to make bogey. He shot 69.

Grillo drove near the 17th green and nearly took out Rory McIlroy, who was still playing the hole. Grillo was under the impression the group had left.

And if he had hit the four-time major champion?

"Would have put me out of my misery," McIlroy said.

McIlroy opened with two quick birdies, although frustration set in quickly and he whacked the flagstick with the end of his putter after missing a par putt on No. 4. He finished with a 71 and was eight shots behind in a tie for 39th.

Steele felt like Saturday would be a grind the way the opening two rounds went, especially with sunshine making Silverado feel more crusty and firm in the afternoon. With some cloud cover, a little moisture on the course and the two-tee start with an 81-man field, there were plenty of low scores available.

"I played better than I score," Steele said. "That was a great round that Andrew shot. I didn't see it, actually. The way it firmed up at the end yesterday and how firm it was today, you really had to be on your game in order to do that. I guess you never underestimate the talent level out here."

Justin Rose, who along with McIlroy is at the Frys.com Open because of an eight-man exhibition he played in Turkey three years ago, used that closing stretch to make a pair of birdies for a 68 and get within two shots.

Justin Thomas had a 69 and was three shot behind.

The 54-hole cut knocked out nine players, so the final round will be played in twosomes from one tee. Loupe will play in the last group with Steele, and perhaps they can share tales from the Valero Texas Open. That's where Steele won his only PGA Tour event in 2011 as a rookie and where Loupe had a chance to win in 2014 as a rookie until he faded at the end. Loupe wound up back on the Web.com Tour and won a Web.com Tour Finals event just last month.

"I just think overall I feel I'm more ready," Loupe said. "I needed to get a win in those Finals. That was huge, just to close out a golf tournament and all that."

Ko overcame a double bogey with two late birdies in a 3-under 69, and Park bounced back from a second-round 74 with a 67 on Sky 72's Ocean Course.

Ko made the double bogey on the par-4 14th, driving left into the water and missing a 4-foot putt. The 18-year-old South Korean-born New Zealander rallied, driving the short par-4 15th to set up a two-putt birdie and making a 10-foot birdie putt on the par-3 17th.

Park birdied three of the last four holes, also driving the 15th, holing a 20-footer on 17 and chipping to 2 feet on the par-5 18th. Making her first career LPGA Tour start, the 22-year-old South Korean player opened with a course-record 62.

Ko and Park were at 13-under 203. American Lexi Thompson and South Korea's Mirim Lee were a stroke back.

VILAMOURA, Portugal -- England's Andy Sullivan shot a 4-under 67 in windy conditions to take a five-shot lead into today's final round at the Portugal Masters.

Sullivan had six birdies in the third round Saturday, when tee times were moved forward because of severe weather.

Today's final round at the Oceanico Victoria course will also start earlier then scheduled because of weather.

Sullivan, who won the South African Open earlier this year, shot 64 on each of the first two days and is 18 under for the tournament.

Eduardo de la Riva of Spain is second after a 3-under 68 put him on 13 under.

SAN ANTONIO -- Defending champion Michael Allen shot a 3-under 69 for a share of the lead with Scott McCarron in the Champions Tour's San Antonio Championship.

McCarron also had a 69 to reach 6-under 138 on TPC San Antonio's AT&T Canyons Course.

Allen, 56, has seven victories on the 50-and-over tour after failing to win on the PGA Tour. McCarron, 50, is making his seventh start in his first season on the Champions Tour. He won three times on the PGA Tour.

Fred Couples was a stroke back along with Bernhard Langer, Scott Dunlap and first-round leader Wes Short Jr. Couples shot 69, Langer 68, Dunlap 71 and Short 72. Couples won the 2011 event, shooting 62-62-66 for a seven-stroke victory.

Charles Schwab Cup leader Colin Montgomerie was tied for 11th at 3 under after a 70. He has a 39-point lead over Jeff Maggert with three events left in the season-long competition. Maggert withdrew because of a lingering calf injury after an opening 72.

Brandt Jobe was tied for 27th at 1 over in his Champions Tour debut. He shot 72.