Below the bar so far 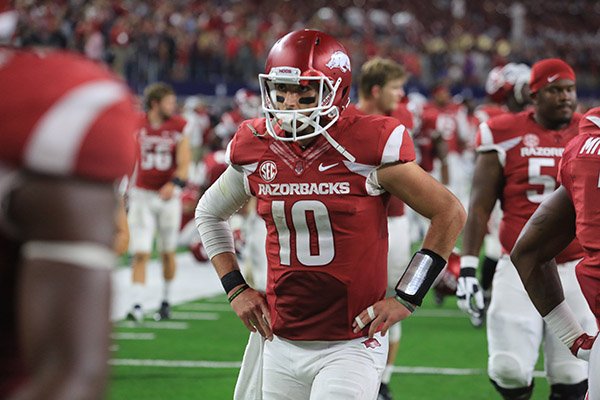 FAYETTEVILLE -- Arkansas hit the halfway point of its schedule with a surprising 2-4 record and a not-as-surprising 1-2 mark in SEC play.

The Razorbacks, who returned a veteran offensive line and a wide array of skill talent, opened the season ranked No. 18 in the The Associated Press Top 25 poll and No. 20 in the USA Today coaches poll. Optimism was high after Coach Bret Bielema said last year's 7-6 record and 31-7 pounding of Texas in the Texas Bowl were a launching point and not a landing point.

Fighting for a bowl spot didn't look like an issue when the Razorbacks opened camp.

Bielema stressed Tuesday that the team has not regressed.

"I know we're a good football team," Bielema said. "We just went toe to toe with Alabama. Unfortunately, we didn't have enough guns to close it out. ... I know where we're going. We've got to continue to develop our roster."

Many analysts expected the Razorbacks would win their first three games against Texas-El Paso, Toledo and Texas Tech and enter SEC play unbeaten.

That didn't happen. The Hogs were upset 16-12 by Toledo in Little Rock, a game in which Arkansas outgained the Rockets by 197 yards.

Then Texas Tech came into Fayetteville eager to atone for last year's 49-28 loss in Lubbock, Texas, and did just that, establishing its tempo in a 35-24 victory.

The Razorbacks appeared to regain their footing by controlling the clock and the flow of the game against Texas A&M, but untimely penalties contributed to Arkansas' second consecutive overtime loss to the Aggies.

The Arkansas coaching staff is working in overdrive this week with a combination of recruiting, self-evaluation from the first half and preparing for a game plan against Auburn, which plays at Kentucky tonight.

The following is an analysis of how the first half of the season played out for the Razorbacks' position groups:

Brandon Allen ranks No. 27 with an average 256 passing yards per game and No. 26 in passing efficiency with 10 touchdown passes and 4 interceptions.

Allen has improved his completions by 6 percentage points to 62.4 percent, has been effective in pre-snap reads and decision making, and his scrambling has been a benefit in recent games. But he has been off target most often in the red zone, with prominent missed throws to tight ends Hunter Henry and Jeremy Sprinkle against Toledo, Texas Tech and Tennessee.

Alex Collins has excelled in the lead tailback role, displaying great vision, cutting instincts and power after contact. He's also been strong in pass protection. Collins' 682 rushing yards rank No. 14, his 113.7 yards per game is No. 25 and his average of 5.5 yards per carry is No. 63.

Rawleigh Williams, with 236 rushing yards, has shown the ability to grow into a quality SEC back.

The Razorbacks have managed to piece together a solid crew after losing Keon Hatcher, Cody Hollister and Jared Cornelius to broken bones in the span of eight days.

Drew Morgan has blossomed as the lead target with 428 receiving yards and four touchdowns, but he was limited by Alabama last week. Dominique Reed has shown the hype he arrived with was real the past two weeks, turning catches into long-distance scores of 33 and 54 yards.

Arkansas has had very few dropped passes from its wideouts and tight ends. The Hogs need route running from Jojo Robinson, Kendrick Edwards, Reed and Damon Mitchell to be more precise. Hunter Henry leads all SEC tight ends with 21 catches for 286 yards and has scored 1 touchdown.

The front wall has gotten its penchant for holding penalties under control the past couple of weeks, but they proved costly in losses to Toledo, Texas Tech and Texas A&M.

Arkansas also recommitted to more straight-ahead man and zone blocking for its run game, which has helped alleviate holding and missed blocks on stunts. Sebastian Tretola has graded out best on the unit, with left tackle Denver Kirkland not far behind.

The Razorbacks have been solid against the run, ranking No. 20 in the country by allowing an average of 107 yards per game. The front struggled to get quick-release passers off point in early games and gave up 72 percent completions in their first four games.

DeMarcus Hodge is having a good season at nose guard and the pass rush has picked up in the past couple of games, led by Deatrich Wise, Jeremiah Ledbetter and Mitchell Loewen. The rotation is deep, allowing a guy like redshirt freshman Armon Watts to pressure Alabama's Jake Coker into an interception last week.

The injuries to Josh Williams impacted a thin group and eventually led to Brooks Ellis taking over at middle linebacker. Freshman Dre Greenlaw has had a couple of prominent mistakes, but he's settling in to the weak side role once held by Ellis, and Dwayne Eugene is emerging on the strong side. Khalia Hackett took reps in early games, but there is scant depth beyond.

Ellis and Greenlaw are making a lot of tackles, but they need to be more forceful and disruptive, as in causing fumbles.

Top corners Jared Collins, D.J. Dean and Henre Toliver, the lead nickel back, have taken a ton of reps, and Collins is playing with an injured right hand. Dean and Toliver were worked over some in the three early losses.

Strong safety Rohan Gaines is having a good season. Santos Ramirez and Josh Liddell are sharing time at free safety. Each has flashed -- both had interceptions last week -- but each has struggled as well.

Too many leaks here, starting with the errant snap from Drew Gorton that led to a blocked Toby Baker punt that set the tone for the Toledo game, a game that also featured Eric Hawkins' holding call that brought back Jared Cornelius' punt return touchdown.

The kickoff coverage unit, which had performed well in earlier games, gave up a 96-yard touchdown to Tennessee. Kicker Cole Hedlund is 5 of 8 on field goals with 1 block and no makes beyond 27 yards. Toby Baker's 40.1-yard punting average includes several pooch kicks from midfield.

Neither of Bielema's fakes the past two games was successful, on a field goal at Tennessee and a punt at Alabama.

Bielema and his staff stressed being geared up to play Weeks 3-6, all SEC games away from home, and that might have caused the program to lose a little focus on the three early games. Clearly, the injuries played a role in the early losses, but Arkansas should have had enough talent to take down Toledo in Little Rock.

The offensive plans produced big numbers but not corresponding scoring totals through five weeks before running into a wall at Alabama. The defense struggled against the pass, particularly on third downs, in the early going. They have improved the past three weeks but were still hurt by passes over the top against Texas A&M and Alabama.

The run game plan has been typically strong.

To the staff's credit, they have been competitive and engaged in all three SEC games after the Razorbacks' 1-2 start. They'll need more of the same down the stretch to make the postseason. 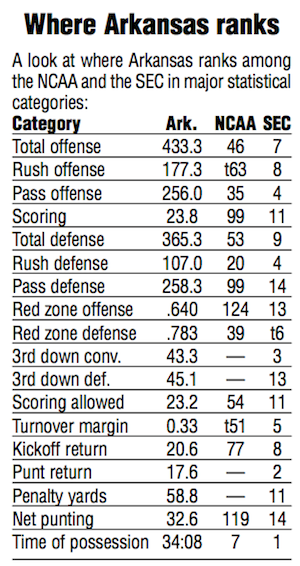