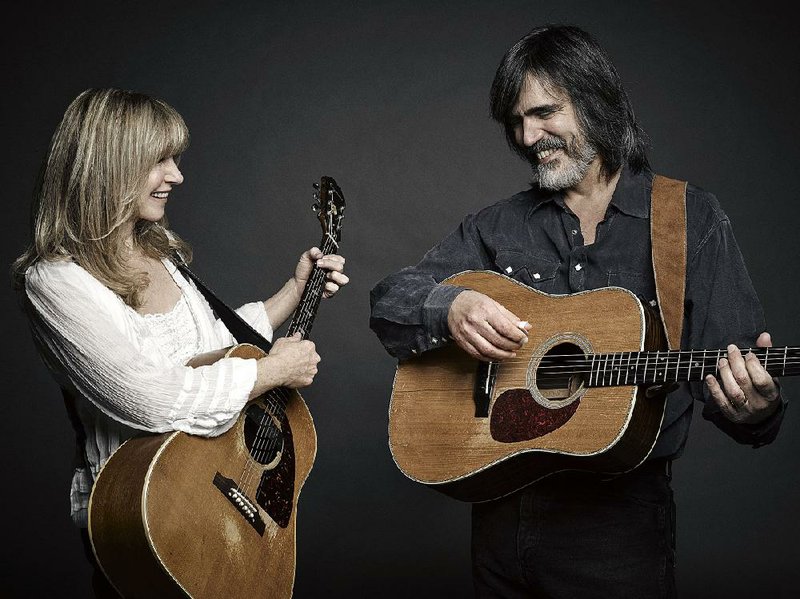 After eight years as Bob Dylan's lead guitarist and seven years handling the same duties for Levon Helm, which included leading the band at Helm's famous Midnight Rambles in Woodstock, N.Y., Larry Campbell thought of something he had never got around to doing -- recording in a duo with his wife, Teresa Williams.

So the couple devoted most of 2015 to finishing their debut disc, released June 23, which they simply named Larry Campbell & Teresa Williams, the cover of which depicts them in a pose that recalls the famous Grant Wood painting, American Gothic, minus the pitchfork.

"That was not intentional," Campbell says with a laugh. "It's been brought to our attention, but we're OK with such a great work of art."

Campbell and Williams -- who are now on tour with Jackson Browne -- will be making their first Arkansas appearance since they accompanied Levon and Amy Helm and the rest of Levon's band at Wildwood Park for the Arts in Little Rock in June 2009. Campbell had left Dylan's band in 2004, and become part of Helm's Woodstock musical community, where he not only played in Helm's band and was the bandleader, but also produced Helm's Grammy Award-winning albums, Dirt Farmer and Electric Dirt.

Williams, a native of Peckerwood Point, which she calls a wide spot in western Tennessee, grew up on her family's farm and recalls the family owning "maybe five records, one of which was by The Chuckwagon Gang. We made our own music and when we went out in the fields to hoe the cotton, my brother would strap his radio to his belt so we could hear music while we worked.

"Larry and I have been married since 1988, but we didn't get to work together much until the years with Levon," she says. "We would sing at times in Levon's band, and he told us we should make an album together, so we decided to do that and were fortunate enough to have Levon play on one of the songs, 'You're Running Wild,' and Amy also sang on a couple of others."

A native of New York, Campbell was a 9-year-old watching The Ed Sullivan Show in 1964 when The Beatles provided him with his direction in life. He has not only toured or recorded with Dylan and Helm, but also with Phil Lesh, Paul Simon, B.B. King, Rosanne Cash, Amy Helm, Willie Nelson, Kinky Friedman, Little Feat, Hot Tuna and Cyndi Lauper.

Campbell is a singer and multi-instrumentalist, as renowned for his violin, mandolin, pedal steel and slide guitar skills as for his electric guitar work. Williams sings and plays guitar.

Browne's band -- which will include Campbell and Williams -- also features Bob Glaub on bass, Mauricio Lewak on drums, Jeff Young on Hammond organ and piano, Chavonne Stewart and Alethea Mills on vocals and Greg Leisz on guitar, lap steel and pedal steel.

Browne released his debut album in 1972 and has since released 14 studio albums and four live albums. His latest, Standing in the Breach, came out in October 2014. On his website, Browne wrote: "I'm thrilled to be touring with Larry Campbell and Teresa Williams. Larry has played in some of my all-time favorite bands, and I'm excited to hear what he brings to my songs as this tour unfolds. Teresa and I have a great vocal blend, as does she and Larry, and I'm looking forward to what happens when we introduce these longtime favorites of mine into my body of songs."

Campbell and Williams get a 40-minute set as the opening act; they'll be accompanied by Browne's band. And they get a delightful tour experience.

Campbell says about Browne, "The man is a pure gentleman and he walks the walk, and talks the talk."