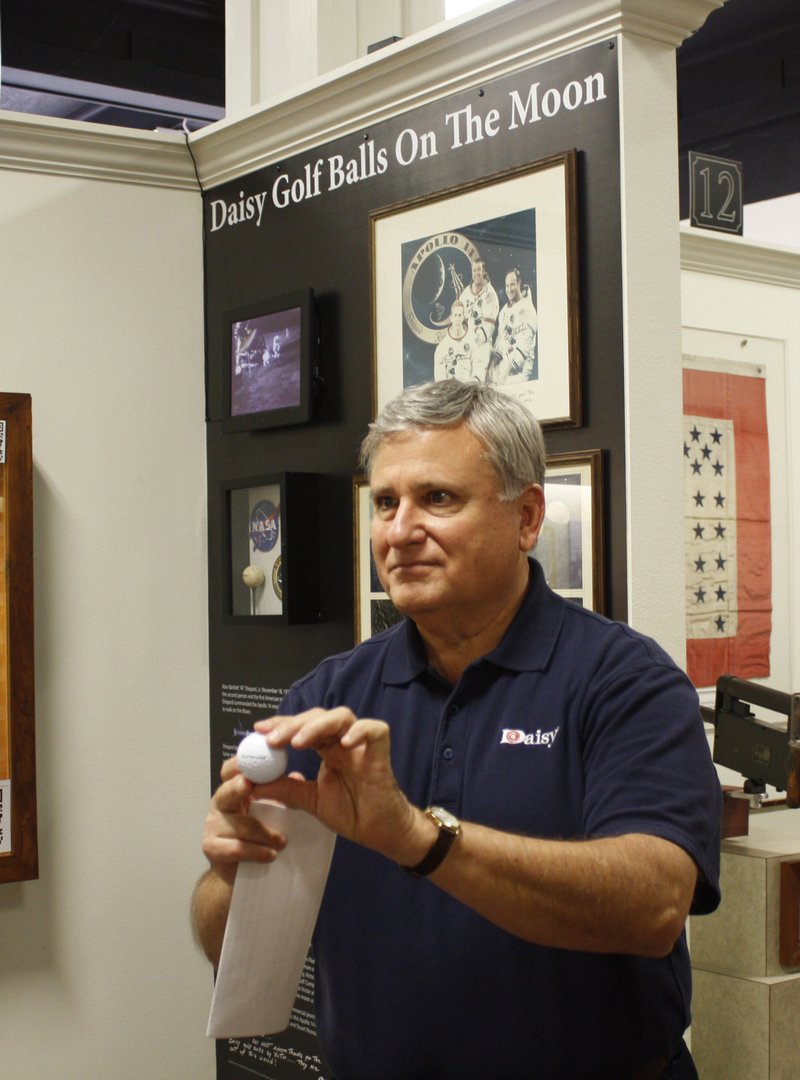 Joe Murfin, chairman of the board of directors at Daisy Air Gun Museum, holds a golf ball up Monday while standing in front of a new display about two golf balls that bear the Daisy logo that are on the moon.

ROGERS -- Alan Shepard's golf swing on the moon is an iconic moment in the 1971 Apollo 14 mission. A piece of that history is now on display in Rogers.

Daisy leaders learned of the Apollo connection after receiving a call over the summer from a company preparing an estate sale.

Books, guns and a lot of Apollo photos owned by Jack Powers were found in a Fort Smith attic, said Joe Murfin, chairman of the Daisy Airgun Museum board of directors. Powers started working at Daisy in 1960 and was a senior public relations executive for the firm for more than 20 years.

Autographed photos of the crews of Apollo 12, 14, 16 and 17 are among the items now on permanent at Daisy's museum in downtown Rogers. A handwritten note with with the Apollo 14 crew photo states "To Jack Powers ... Our most sincere thanks for the Daisy golf balls by Victor ..... They are out of this world!" The display also features a Victor Daisy golf ball from around 1971 and a video showing the famous 6-iron shot.

Shepard took two golf balls on his moon walk and hit them both. The balls bear the Daisy logo. The company has been known for its BB guns for more than 125 years, but golf balls were part of its catalogue when it was owned by by Victor Comptometer Corp. Daisy moved from Plymouth, Mich., to Rogers in 1958.

The balls made it to the moon because of Power's friendship with Al Chop, who worked in public relations for NASA at the time. Powers suggested sending the golf balls along on the mission.

The story of the golf balls was untold for so many years because NASA would not allow a company to use items sent to space to make money or for commercial promotion, said Bobby Livingston, spokesman of RR Auction in Boston. The company specializes in rare documents, manuscripts, autographs and historic artifacts. Livingston said NASA memorabilia is the company's fastest growing section, accounting for nearly $6 million in sales.

Livingston said a watch worn by Apollo 15 astronaut Dave Scott is being auctioned Oct. 22. It is the only watch worn on the moon not owned by the government. Scott took it along because he was worried his original watch might break while he was on the moon's surface, meaning he could lose track of time and die, he said.

"His watch did break, and he wore his backup," Livingston said. "But he brought it back and didn't leave it on the moon."

The watch has a minimum opening bid of $50,000. He said if there was a way to get the balls hit on the moon back, they would be worth a lot of money.

Rogers Mayor Greg Hines said it's amazing that the golf ball story sat in obscurity for so many years.

"This is a display I would expect to go and see at the Smithsonian," he said.

Michael Neufeld, senior curator at the Smithsonian National Air and Space Museum, said Apollo missions have been one of the most popular topics on site and online for many years.

A mock-up of the club Shepard used to hit the golf ball is on display. Shepard donated the original club to the United States Golf Association Museum in 1974.

"He took the golf swings at the end of a long scientific experiment," Neufeld said.

A museum Kickstarter campaign recently raised more than $700,000 to restore Neil Armstrong's space suit. Neufeld said once it's conserved and placed in a proper case, it will go on display in 2019.

J.R. Shaw, executive director of Visit Rogers, said interest in space and in sports will help draw visitors to the museum.

"People are looking for something new and unique," he said. "It is also something residents can find that's in their own backyard."