Clinton at library to open exhibit 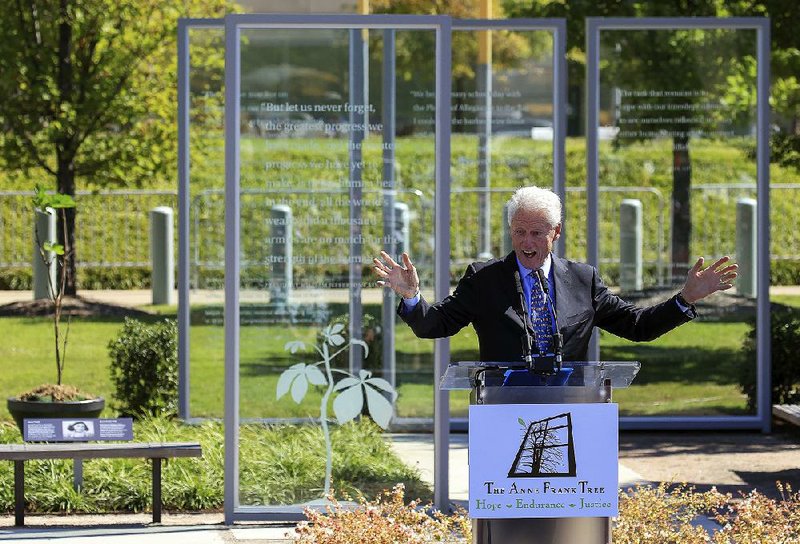 Former President Bill Clinton, speaking at Friday’s opening ceremony for the Anne Frank sapling exhibit at the Clinton Presidential Center, said the teenager’s life should be an inspiration.

A sapling taken from outside Anne Frank's house in Amsterdam traveled more than 4,500 miles to become part of a permanent exhibit outside the Clinton Presidential Center in Little Rock. 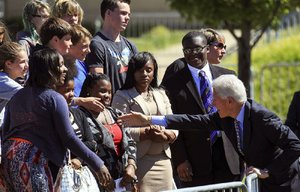 Photo by Benjamin Krain
Former President Bill Clinton greets some of the 700 schoolchildren who attended a ceremony Friday for an Anne Frank exhibit at the Clinton Presidential Center. Representatives from Congregation B’nai Israel, the Clinton Foundation and the Anne Frank House in Amsterdam also spoke.

Former President Bill Clinton was on hand to introduce the exhibit. His remarks, which focused on injustices in Arkansas and abroad, were heard by several hundred people.

"We could do worse in this deeply troubled time where people all over the world are so divided by what appears superficially to be religious or racial or ethnic or tribal differences," Clinton said. "We could do far worse than to spend a little time every single day, for the sake of the young people here, reflecting on the life of Anne Frank."

He noted that Little Rock will be the only city in the country to have two of the saplings. The other is planted at Central High School.

Anne kept an intimate diary while her family and four other Jews were hiding from the Nazis. The first entry was on June 12, 1942, and the last entry was Aug. 1, 1944.

On Aug. 4, 1944, the eight people living in a secret annex were arrested. The Jews were deported to labor camps. Anne died of disease in 1945, shortly before the camp was liberated. Anne's father, Otto, was the only one of the eight to survive.

Her diary, which mentions the tree, was read by millions after her death.

Anne was 13 when she began writing and 15 when she was forced to stop.

Clinton noted that Melba Pattillo Beals, a member of the Little Rock Nine, was also just 15 at the beginning of her own struggle.

"[Anne's] life is a constant reminder about how even young children can quickly be demonized and marked for death simply because of who they are," he said.

"It is amazing to look at all of human history and realize how much energy has been wasted by people obsessing about our differences and how vulnerable those people are to being taken advantage of by people who just really want power, money or both."

The new exhibit consists of five glass panels arranged to evoke the feeling of being enclosed in a room.

The three others describe times when unpopular groups were targeted in Arkansas. The panels refer to the Indian Removal Act of 1830, the internment of Japanese-Americans during World War II, and the Little Rock Central High School desegregation crisis of 1957.

Those panels will feature quotes from Chief Heckaton, the hereditary chief of the Quapaw during Arkansas' Indian Removal; George Takei, a Japanese-American actor who was interned at the Rohwer Relocation Center in Desha County in 1942; and Beals.

Instead of repeating the mistakes of the past, "we need to do something right and decent and honorable and recognize that our community humanity matters more than our interesting differences," Clinton said.

Several hundred schoolchildren were present at the event.

Ronald Leopold, executive director of the Anne Frank House in Amsterdam, told the audience that the Little Rock Nine were the natural extension of Frank's spirit.

"Like Anne, they did not give in to the hopelessness of the moment, but held on to their unalienable rights and ideals," he said. "Nine brave students opened the doors for millions of others, even though behind those doors there was so much work to be done."

"I am 17 years old. I am just a little older than Anne Frank was when she died," she said. "The tree inspired Anne to write about her hopes and dreams for the future. Anne's words, written in her diary, have inspired millions of people around the world, including me."

"I hope one day our little tree will grow and flourish and resemble the tree that provided comfort and hope to Anne."