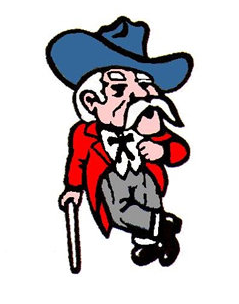 The Southside High School Rebel mascot as pictured on the school website.

FORT SMITH -- The Fort Smith School Board did not violate the Arkansas Freedom of Information Act when it decided as a committee to consider the elimination of the Southside High School fight song and mascot, a Sebastian County Circuit court judge ruled Thursday.

In the lawsuit, McCutchen asked Cox to rule that the board violated the Freedom of Information Act when it failed to give prior notice of a committee of the whole meeting June 23 at which the board decided to take up at its next regular meeting the elimination of the "Dixie" fight song and the Rebel as the school's mascot.

In dismissing the Freedom of Information Act challenge, Cox ruled the act required the board to notify the media when a special board meeting was called, which it did, but it was not required to publish an agenda.

The district had sent out notice to local news organizations June 22 and June 23 that the board would hold a special meeting for the annual evaluation of Superintendent Benny Gooden. It did not mention a committee of the whole meeting.

Before the board went into executive session for Gooden's evaluation, the committee of the whole meeting was called. Then, the five members present voted to place the mascot issue on the agenda for the July 27 regular meeting.

Board President Deanie Mehl testified Thursday that she mentioned to the other members before the board's June 22 regular meeting that the board should consider revisiting the Southside mascot issue after a mass killing a week earlier in Charleston, S.C. Other board members agreed, but there was no discussion at that time, she said.

Nine black people were shot and killed June 17 by a white man during a Bible study in Emanuel African Methodist Episcopal Church in Charleston, S.C. The attacks resulted in a national campaign to do away with Confederate symbols after photographs surfaced of the man accused of being the shooter with a Confederate flag.

Mehl also said the Confederate symbolism of the high school's mascot and fight song has been opposed by a majority of the people in the community for the 10 years she's been on the board.

The School Board voted unanimously at the July 27 meeting to immediately eliminate the "Dixie" fight song and to phase out the Rebel mascot during the 2015-16 school year. More than 200 people attended the meeting, and 39 spoke during a public comment period.

A motion at Monday's School Board meeting to compromise and allow the name "Rebel" to be retained as a nickname failed in a 3-3 vote.

McCutchen also included in the lawsuit he filed Sept. 1 and amended Sept. 22 a request for Cox to rule that the School Board's vote July 27 did not prohibit the use of the Rebel name and, if so, to bar the board from making such a prohibition.

Cox said he would give McCutchen 10 days to file a brief arguing his stand on the Rebel name and five days for school district attorney Mitch Llewellyn to respond.

However, Cox said during Thursday's hearing that the board's motion seemed unambiguous in removing the Rebel name and that the actions of the School Board to set its own policies and procedures was its business and something he did not want to get involved in.

School officials have set up a committee to choose a new mascot for Southside. A committee was formed in July that replaced "Dixie" with "The Wabash Cannonball" as the school's new fight song.