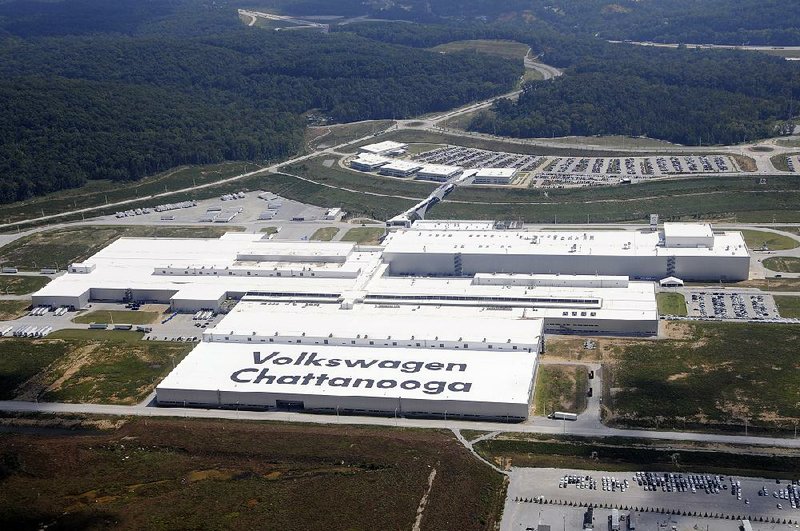 An incentive package to attract Volkswagen to Chattanooga, Tenn., included tax credits, funding for training and the “Volkswagen Chattanooga” sign on the roof of the plant.

CHATTANOOGA, Tenn. -- Inside Volkswagen's only U.S. assembly plant there's little hint of the diesel emissions cheating scandal embroiling the German automaker around the world. Sparks fly off robotic welding arms, new versions of the Passat sedan roll off the line and workers install equipment to build a new SUV billed as a key to reviving the company's growth prospects in America.

"Nothing has changed, and the factory construction goes on," plant spokesman Scott Wilson told The Associated Press on a tour of the sprawling facility where Volkswagen plans to add 2,000 jobs as it expands the facility by 30 percent.

But despite the business-as-usual feel of the plant, production of diesel-engine vehicles has been put on hold by VW until they get more clarity on the consequences of the emissions scandal, which has already led to the resignation of the chief executive officer, billions of dollars in lost stock value and numerous lawsuits.

The carmaker has admitted that 11 million of its diesel vehicles worldwide were fitted with a program that duped U.S. testers into believing the vehicles meet environmental standards.

And while the full effect on demand for Volkswagen's remaining vehicles remains to be seen, some Tennessee officials fear for job prospects at the plant that currently employs 2,400, where the average hourly wage is about $21 and perks include reduced-cost leases on VW vehicles with free insurance coverage.

"My primary concern is getting Volkswagen back to where they're in a mode to sell cars," Haslam said.

Workers at the plant have largely remained mum on the scandal.

The United Auto Workers union sees the Chattanooga plant as an enormous opportunity to gain traction in a region where Republican politicians are hostile toward organized labor, and UAW officials frame their concerns in the most delicate possible terms. Secretary-Treasurer Gary Casteel in a statement said the union has offered its help for Volkswagen to "emerge as a stronger and more responsible manufacturer."

Representatives of a rival labor group, the American Council of Employees, did not return phone messages.

Volkswagen's openness to organized labor has riled Republican Tennessee politicians including Haslam and U.S. Sen. Bob Corker. Another critic, Chattanooga state Sen. Bo Watson has called for hearings on the scandal, prompting company supporters to grumble that he wants to go after the automaker in its darkest hour.

Watson said the hearings are warranted, given the nearly $900 million in incentives that state and local governments have poured in to the project since VW first announced it would locate the new plant in Chattanooga in 2008.

Tennessee's incentive package to Volkswagen included everything from infrastructure and construction grants, tax credits and training funding to a "Volkswagen Chattanooga" sign on the roof of the plant that stretches the length of more than two football fields.

The state economic development department issued a memo to state lawmakers this week stressing "assurances" from Volkswagen that plans at the plant are on track, and outlining the state's ability to recoup portions of its latest $166 million grant if the company fails to average at least 80 percent of the promised new jobs starting in 2020.

The emissions scandal hit at what was already a delicate time for the company suffering from declining sales after a 2012 sales bonanza surrounding the introduction of the U.S.-made Passat. While Volkswagen executives made bold predictions of increasing Passat production by more than 60,000 vehicles in 2013, sales instead began what would become a 17 percent slide by the end of 2014.

Overall Volkswagen sales in the U.S. also dropped by a similar margin during that period as the company didn't offer competitive products in key market segments such as midsize SUVs or pickups.

Volkswagen announced in July 2014, after repeated delays, that it would build the new seven-seater SUV in Chattanooga. Then-CEO Martin Winterkorn said at the time that the announcement sent a "strong signal for the U.S. as an industrial and automobile production location."