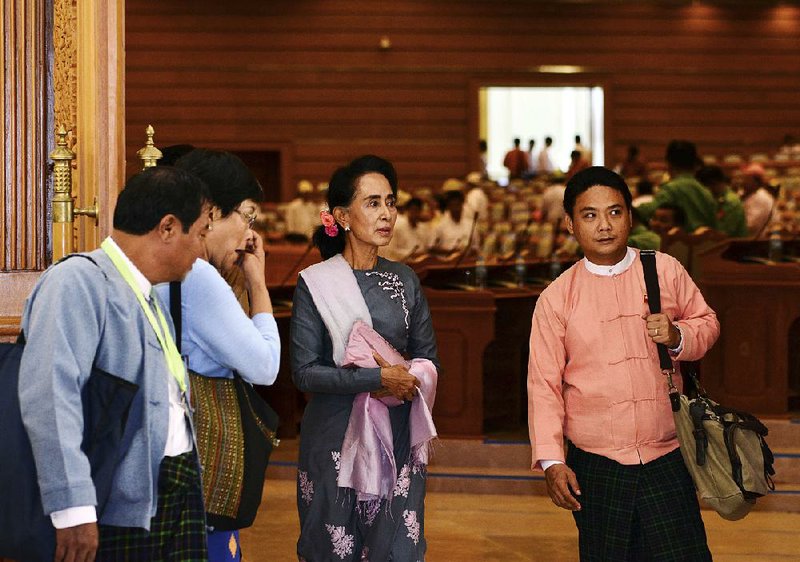 NAYPYITAW, Burma -- The military-backed party overwhelmingly voted out of office in Burma's general elections still has another 2½ months to make laws as the majority -- and retains enough potency to complicate matters if it chooses to do so.

The Parliament that began its new session Monday is still dominated by legislators from the Union Solidarity and Development Party, which was trounced by Aung San Suu Kyi's National League for Democracy in the Nov. 8 elections.

The appearance of unfairness did not diminish the optimism of opposition party lawmakers.

"We have been through many difficult situations. It will not be too much of a headache for NLD," said Win Htein, a National League for Democracy member.

Over the next 2½ months, Parliament will mainly scrutinize additional budget requests by ministries, said Tin Maung, a Union Solidarity and Development Party legislator. "There will be more discussion on draft laws that were discussed in the past, and maybe some laws will be passed," he said without giving details.

The session lasts until Jan. 31, when the new parliament will sit with roles reversed -- the National League for Democracy will occupy 387 of the 664 seats in the two houses, and the Union Solidarity and Development Party will have only 42 seats, down from more than 360 it now holds.

The lame-duck session is unusual for a parliamentary democracy, where usually the legislature is dissolved before an election and convenes with the newly elected members. But Burma's government structure includes features of a presidential system.

Also, 166 seats are reserved for the military under an arrangement the former junta made before ceding power to the quasi-civilian Union Solidarity and Development Party government in 2011 as part of a gradual transition to democracy after a half-century of military rule. The party is made up largely of former junta members.

Burma is often called Myanmar, a name that ruling military authorities adopted in 1989. Regime opponents have refused to adopt the name change, as have the U.S. and the United Kingdom.

After Jan. 31, the two largest parties in the upper and lower house -- which is the National League for Democracy in both -- and the military bloc will propose three candidates, one of whom will be elected president, with the other two becoming vice presidents. The president will then form a cabinet.

This system was most likely created in the belief that the Union Solidarity and Development Party and the military combined would have a majority and could elect their candidate as the president. But the National League for Democracy victory on Nov. 8 has in effect negated the military's guaranteed presence.

Still, National League for Democracy leader Suu Kyi cannot be elected president because of another clause in the constitution written by the military -- anyone with a foreign spouse or children is ineligible. Suu Kyi's two sons are British, as was her late husband.