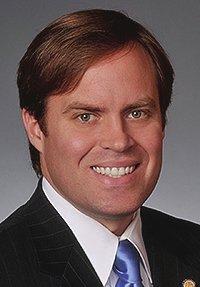 "I've had serious conversations with my family about leaving on a high note since April," Woods said in an interview Friday before his public announcement Saturday morning.

"I was lead sponsor on 35 bills that became law in the last legislative session. That's as many as in all my three terms in the House put together. I've sponsored three amendments that passed and went into the state constitution. How many legislators get a chance to have a part in getting one amendment added to the constitution?

"But I haven't been fishing with my brother in a year," said Woods, who married last year. "I want to go home. I have friends in my district who I miss."

Woods is leaving after serving one four-year term in the Senate. He said he plans to serve out the rest of his term, which runs through 2016 and includes the upcoming fiscal session of the Legislature.

Woods declared his support Saturday of state Rep. Lance Eads as his replacement. Eads, who represents House District 88, confirmed Saturday he will run for the District 7 Senate seat.

Woods said Clint Penzo, an area real estate agent who has served on the Tontitown City Council, intends to seek his House seat. Messages left for Penzo were not returned Saturday.

Eads had already announced plans to run for re-election. He changed those plans only after first becoming aware that Woods might not run for re-election "in the middle of this week," he said. "People I have confidence in encouraged me to run, telling me I could do even more for Springdale and the surrounding area as a senator."

"I want to thank Senator Woods for his many years of service to the Northwest Arkansas community," the statement quoted Hutchinson as saying. "Rep. Eads with his knowledge and understanding of the Springdale area and his legislative experience is the right person and the right conservative to replace Sen.Woods. I am delighted Lance is running and I support his candidacy and bid for Arkansas Senate. He will make his constituents proud."

Sharon Lloyd, a Washington County justice of the peace, has already filed for Woods' Senate seat. She and Eads will run in the Republican primary. "Of course I was surprised, but it doesn't change how I feel about District 7 or my passion about the race," Lloyd said. "It doesn't matter if I have an opponent or who it is."

There are no Democrats at the present time planning on running for the seat, said Tyler Clark, Washington County party chairman. Recruiting a candidate while it appeared Woods would be an incumbent was difficult, he said.

Rep. Charlie Collins, R-Fayetteville, lives in Woods' district, but will not seek the Senate seat, he said Saturday. Collins will seek re-election to the House, he said.

Woods' announcement comes after an Oct. 20 fundraiser in Springdale for his re-election, which Gov. Asa Hutchinson attended. His announcement may seem abrupt to some, Woods said, but that's largely because candidate filings were moved up four months to accommodate early primaries for presidential races.

"Normally I would have announced a decision like this in January" with filing not opening until March, he said. Now the primary itself is on March 1.

"My intention was to announce this decision earlier, but constituent obligations, being under the weather and tremendous pressure to remain in the race delayed my action," Woods said in a statement released on Saturday.

Woods served three terms in the state House before defeating incumbent Sen. Bill Pritchard, R-Elkins, in 2012. Woods sponsored a state constitutional amendment, along with Rep. Steve Faris, D-Malvern, guaranteeing a right to hunt and fish, during his time in the House.

"I lived up to my campaign slogan. I rocked the boat," Woods said.