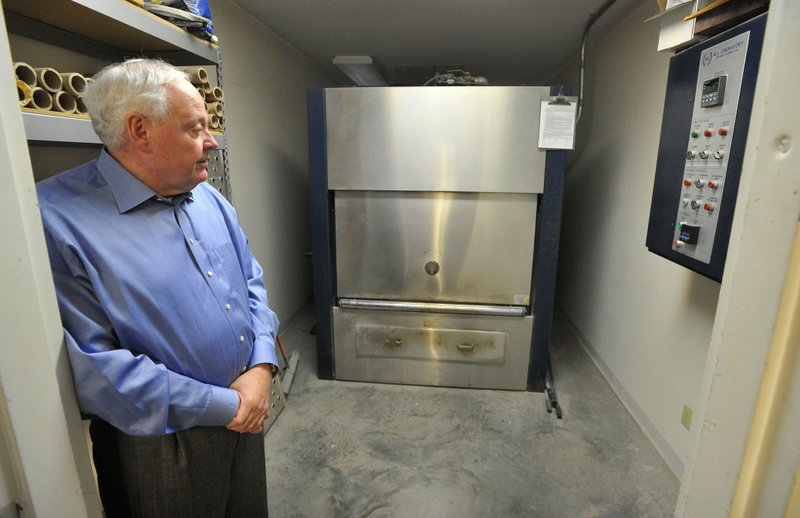 Tommy Holland with Beard’sFuneral Chapel in Fayetteville shows the crematorium Tuesday at the Fayetteville Funeral Chapel. Cremation is gaining in acceptance and popularity. Thirty-two percent of American deceased were cremated in 2005, growing steadily to 49 percent last year. The National Funeral Directors Association predicts the rate will increase to 71 percent by 2030.

The growing number of funeral options from cremations to celebrations are making burying a loved one more convenient and comforting. 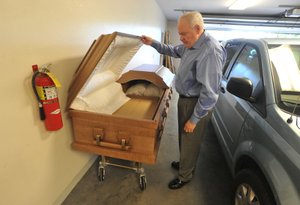 "There are no more cookie cutter funerals," said Bradley Sheppard, a funeral science instructor for Arkansas State University-Mountain Home. He is based at the program's Northwest Arkansas Community College location in Bentonville. "People have so many options these days."

Nearly half of all people who died nationally last year were cremated and about 36 percent of Arkansans were cremated, according to the National Funeral Directors Association. Industry insiders expect that number to continue to rise.

An increasing number of people also are going with a green, or natural, burial. The deceased isn't embalmed, and burial involves a biodegradable casket, shroud or blanket and no vaults. A Fayetteville-based group is in the early stages of establishing a natural cemetery.

Services are also becoming more individualized, and many people are choosing to simplify the events, Sheppard said.

"Many people are sort of downscaling, but still recognize the value of having something," he said.

Joshua Slocum, executive director of the nonprofit Funeral Consumers Alliance, said money is a major reason people are looking for alternatives, but he also pointed to generational preference changes.

"A lot of people are not finding the same satisfaction will the full-service funeral and visitation hours," he said. "Funerals change the way fashion changes, not always the same way in the same areas."

Slocum also said the fact people are more transient means visits to local cemeteries are just not convenient or practical many times.

Cremation is gaining in acceptance and popularity. Thirty-two percent of American deceased were cremated in 2005, growing steadily to 49 percent last year. The National Funeral Directors Association predicts the rate will increase to 71 percent by 2030.

Arkansas cremations lag the national rate, but are also increasing. The rate was 20 percent in 2005 and is projected to reach 59 percent by 2030.

Slocum said cremation is not new and is considered the norm in many parts of the country. Southern states have been a bit slower accepting the practice, he said.

"Religion has a lot to do with it. There is a general idea that Christians don't get cremated, they get buried," he said. "They say they want a 'Christian burial,' but what they mean is a traditional funeral."

Most religions allow cremation except for Orthodox Jewish, Islamic, Eastern Orthodox and a few Christian faiths who practice a more strict interpretation of the Bible.

Cremation is chosen at times because the remains aren't tied to a location. Ashes can be taken anywhere to be spread or saved.

It also gives grieving loved ones more time to plan a memorial service, he said.

Judy Van Hoose, congregational care pastor at First United Methodist Church in Springdale, said a growing number of people are also concerned about the environment and don't want to use a lot of land for burial.

"They are trying to be Earth conscious," she said.

The church saw such an increase in cremations it installed a columbarium in the courtyard. A columbarium is a structure that holds funeral urns. Van Hoose said First United's columbarium has 48 spots, and only 20 remain unsold. Each space costs $1,600.

"People sometimes don't know what to do with the ashes," she said. "This is just another option for people. Some like to come and talk to their loved ones."

Tommy Holland, a co-owner at Beard's Funeral Chapel in Fayetteville, said 30-35 percent of his business is cremation. The funeral home has a crematorium on site, which he said provides customers extra confidence their loved one is being cared for.

Scott Berna, owner of Nelson-Berna Funeral Home and Moore's Chapel in Fayetteville, agrees providing on-site cremation can increase use of the service. He said between 40 percent and 50 percent of his business is cremation.

Costs are just one draw to cremations. The Funeral Directors Association reports the national median cost of a traditional funeral was $8,508 last year. A cremation with the same visitation and memorial services cost $6,078. A service called direct cremation, which means there are no visitation or services, starts about $1,000.

Urns come in many shapes and sizes and cost a fraction of the price of caskets. The price of an urn can be under $100 while caskets tend to start near $1,000.

Families are often scattered across the country and can't always make it back right away for a traditional funeral service, but can hold a memorial service any time following cremation.

"One of the reasons I decided I want to use cremation is I don't want to occupy that many cubic feet forever," Buel said.

Vickie Kelley is a strong believer in preserving the environment and founded the National State Burial Association. She hopes to start a natural cemetery on 20 acres of donated land off Hamestring Road in west Fayetteville.

Kelley opted for cremation 16 years ago after her 27-year-old son was killed in an auto crash. She still has his ashes.

"When I was doing my research, it was a slap in the face," she said. "There are so many other types of burials happening in Europe and all around us."

The Green Burial Council says natural, or green, burial is a way of caring for the dead with minimal environmental impact. Bodies are not embalmed and nontoxic and biodegradable materials for caskets, shrouds and urns must be used. Burial vaults and grave liners are not used.

The council certified 46 green cemeteries nationwide. Some conventional cemeteries are considered hybrid because they allow burial without a vault or grave liner. They allow shrouds, but often require embalming.

Kelley said natural burial is about 2 feet deep rather than the conventional 6 feet.

There are no certified green cemeteries in Arkansas. The Gracelawn Memorial Park in Van Buren is a hybrid.

Spivey said Sisco Funeral Home has done a couple of green burials, but still considers it a relatively new idea in Northwest Arkansas.

"I think it happens in other states. It just hasn't caught on here yet. The only reason we could do it is because there is a cemetery close by," he said referring to Gates to Heaven Cemetery in Seligman, Mo. The cemetery is five miles north of Pea Ridge.

Arkansas law does not require embalming unless a body is going to be displayed for visitation or transported out of state by plane, train or bus, said Anne Goode, executive secretary of the Arkansas State Board of Embalmers and Funeral Directors. The law requires bodies not being embalmed to be refrigerated within 24 hours of death or 48 hours for cremation. A body being taken to the Missouri natural cemetery would likely go by car or funeral transport vehicle.

Kelley said her main focus now is on educating the public. The state doesn't require burial vaults, but many cemeteries do. Kelley said she's creating a list showing which cemeteries are open to other options.

She also is telling people how they can have a home funeral. State law allows a family to tend to its dead as long as they have a signed death certificate. The state requires bodies be buried in an established cemetery, but many rural areas have family graveyards approved by the state.

Slocum said he's always amazed when people are surprised they can prepare a dead body at home.

"Very little is legally required. It's not mysterious, not dangerous," he said. "It doesn't require any skills that a family isn't already doing."

Families cared for their own dead until the mid-1800s, Slocum said. They prepared, dressed and displayed their loved ones in their own homes, but as people moved to cities and more people started dying at hospitals, the movement started to having funeral homes care for the dead, he said.

Ricky Epting, owner of Epting Funeral Home, said many people are going the less is more route. He started his funeral home in 2008 in a converted house without a chapel. He has offices in Bentonville, Bella Vista and Fayetteville.

"We have churches in the area that open the door to us," he said. "Many people just want to have a graveside service, so why pay for a chapel when you don't need one?"

Direct burial is also common, he said. Often someone will die in the morning and can be buried that afternoon.

"Then a few days later they may have a celebration of life," Epting said.

Celebrations rather than mourning periods is also becoming commonplace, he said. Many funeral homes have someone called a celebrant who handles nondenominational or nonreligious ceremonies.

"People are looking for ideas and want to do their own thing," Epting said.

Van Hoose said people are looking for a chance to celebrate the deceased's life and be comforted.

"We hear people say they don't want to be serious or sad," she said.

A growing trend is having the burial first and then gathering for a service, Van Hoose said. Trips to the cemetery can be very difficult for some people, and they don't want it to be the last memory they have of a loved one.

"It often helps with the grieving process," she said.

A growing number of people are opting for services with cremation. Beard's has a rental casket for people wanting full visitation prior to a cremation, Holland said. The casket has a disposable liner that goes with the body into the cremation chamber.

Technology is also playing an increased role in funerals, from online condolences to live streaming services.

Epting said it doesn't happen often, but he has live-streamed a service. He said a Chinese funeral was streamed for a wife who couldn't make it back for the services.

Berna said he posted services on his website several years ago, but discontinued it because of a lack of interest. He said he was never comfortable with live streaming because of the unexpected.

"I don't think that is the best scenario to expose the family to," he said.

He does provide a DVD to families who request it.

Berna said personalization is also growing. He's had everything from a Harley-Davidson in his chapel to a group doing the Hog Call.

"I think it's cool to personalize it for the individual," he said. "Do what the loved one would have wanted done."

Slocum said the more involved family and friends are in the funeral process, the more closure they tend to get.

"It says a lot about the healing power of hands-on engagement," he said.