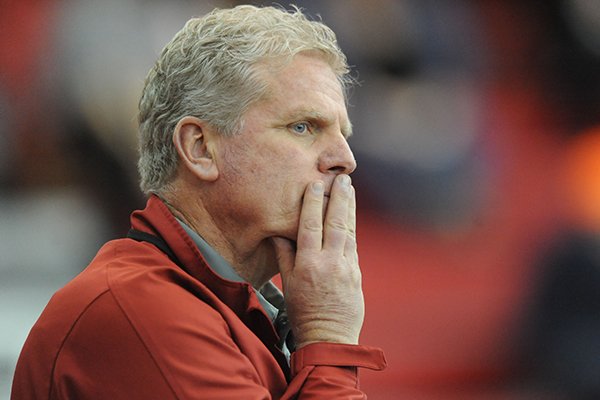 FAYETTEVILLE -- Chris Bucknam kicked himself for his candor.

The Arkansas Razorbacks men's track and field coach knew on a conference level where his young team was in depth compared to the greater depth of the senior laden Florida Gators and Texas A&M Aggies going into last weekend's SEC Outdoor Track and Field Championships in Starkville, Miss.

Doing the math, he couldn't lie to his team. Admirably, he didn't lie to this columnist, either.

"There is no scenario for us to win it," Bucknam said last week. "With 21 events we are just not deep enough. It looks like a meet between Florida and A&M."

Though explaining for print the premium he placed "on fighting like heck" in the SEC and its impetus into the NCAA Outdoor Championships in June 10-12 in Eugene, Ore., for which Bucknam believes his Hogs are a viable national contender, Bucknam anguished afterward that his words would be misinterpreted as "giving up the fight."

That's certainly not the message he imparted to his team, and they proved it.

Motivated by their coaches' pride, and their pride in their program, the Razorbacks outdid themselves in Starkville.

No, they didn't win the meet. Florida did with 130 points. But the Hogs stunned Texas A&M by tying for second with 95 points.

They did so not just because their national leaders -- hurdler Omar McLeod, steeplechaser Stanley Kebenei, and 5,000-meter Kemoy Campbell -- won SEC championships.

They excelled with the out-of-the-woodwork supporting role performances that were part of Bucknam's 13 SEC champion teams in cross country, indoor and outdoor track.

"They responded really well," Bucknam said. "It's part of our DNA at Arkansas in track to compete and win championships, and we have won a lot of championships the last few years, but on paper we looked at a tough row to hoe. I told the team, 'You can't look at the scoreboard. Just bear down and compete' and they did just that.

"I am just really proud of the fight of my team. The level of maturity they showed is impressive."

Apparently they impressed national pollsters, too. Arkansas advanced from No. 8 to No. 5 in Monday's U.S. Track and Field Coaches poll that ranks Florida first and Texas A&M second and includes nine SEC teams among the the top 25 going into next week's NCAA West Preliminary in Austin, Texas.

"We all know the SEC is toughest conference in the country for track and field, and to be able to do the things we needed to do was a good measuring stick," Bucknam said. "I told the team we are at the penultimate step going into the NCAA meet."