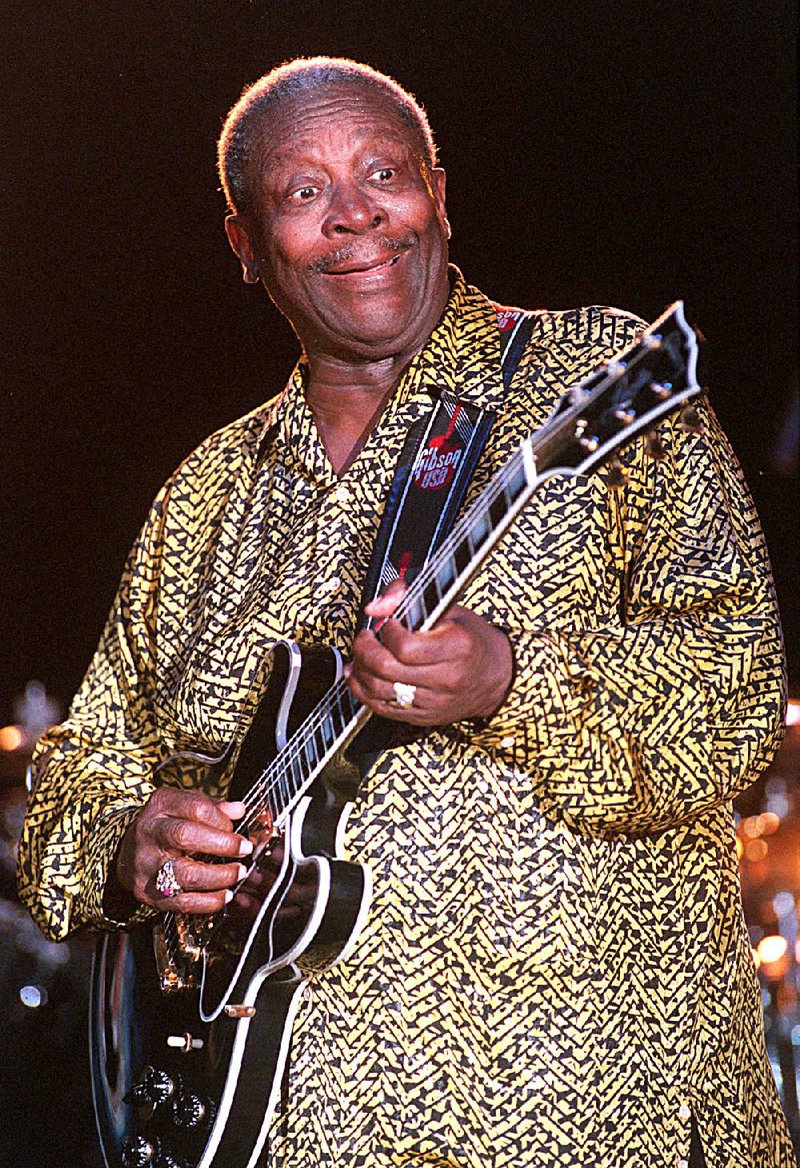 B.B. King always played a Gibson guitar he named Lucille in honor of a woman who sparked a dance-hall fight in Twist, Ark.

B.B. King, whose world-weary voice and wailing guitar lifted him from the cotton fields of Mississippi to a global stage and the apex of American blues, died Thursday at his home in Las Vegas. He was 89.

John Fudenberg, the coroner of Clark County, Nev., said the cause was a series of small strokes attributable to Type 2 diabetes, The Associated Press reported. King, who was in hospice care, had been in poor health but had continued to perform until October, when he canceled a tour, citing dehydration and exhaustion stemming from the diabetes.

King married country blues to big-city rhythms and created a sound instantly recognizable to millions: a stinging guitar with a shimmering vibrato, notes that coiled and leapt like an animal, and a voice that groaned and bent with the weight of lust, longing and lost love.

Many of the songs he sang -- like his biggest hit, "The Thrill Is Gone" -- were poems of pain and perseverance.

King went out on the road and never returned after one of his first recordings reached the top of the rhythm and blues charts in 1951. He began in juke joints, country dance halls and ghetto nightclubs, playing 342 one-night stands in 1956 and 200 to 300 shows a year for a half-century thereafter, rising to concert halls, casino main stages and international acclaim.

By his 80th birthday, he owned a mansion in Las Vegas, a closet full of embroidered tuxedos and smoking jackets and a chain of nightclubs bearing his name.

Through it all, he remained with the great love of his life, his guitar. He told the tale a thousand times: He was playing a dance hall in Twist, Ark., in the early 1950s when two men got into a fight and knocked over a kerosene stove. King fled the blaze -- and then remembered his $30 guitar. He ran into the burning building to rescue it.

He learned thereafter that the fight had been about a woman named Lucille. For the rest of his life, King addressed his guitars -- big Gibsons, curved like a woman's hips -- as Lucille.

He married twice, unsuccessfully, and by his own account he fathered 15 children with 15 women. But a Lucille was always at his side.

Riley B. King (the middle initial apparently did not stand for anything) was born Sept. 16, 1925, to Albert and Nora Ella King, both sharecroppers, in Berclair, a Mississippi hamlet outside the small town of Itta Bena.

By early 1940, King's mother was dead and his father was gone. He was 14 and on his own, "sharecropping an acre of cotton, living on a borrowed allowance of $2.50 a month," wrote Dick Waterman, a blues scholar.

In November 1941 came a revelation: King Biscuit Time went on the air, broadcasting on KFFA, a radio station in Helena, Ark. It was the first radio show to feature the Mississippi Delta blues, and young Riley King heard it on his lunch break at the plantation. A largely self-taught guitarist, he now knew what he wanted to be when he grew up.

The King Biscuit show featured Rice Miller, a primeval bluesman and one of two performers who worked under the name Sonny Boy Williamson. After serving in the Army and marrying his first wife, Martha Denton, King, then 22, went to seek him out in Memphis, looking for work.

He quickly became a popular disc jockey playing the blues on Memphis radio station WDIA. On the air, King was nicknamed the Beale Street Blues Boy. That became Blues Boy, which became B.B. In December 1951, two years after arriving in Memphis, King released a single, "Three O'Clock Blues," which reached No. 1 on the R&B charts and stayed there for 15 weeks.

By the time his wife divorced him after eight years, he was playing 275 one-night stands a year on the so-called chitlin' circuit.

King's second marriage, to Sue Hall, also lasted eight years, ending in divorce in 1966. He responded in 1969 with his best-known recording, "The Thrill Is Gone," a minor-key blues about having loved and lost. It was co-written and originally recorded in 1951 by another blues singer, Roy Hawkins, but King made it his own.

He is survived by 11 children.