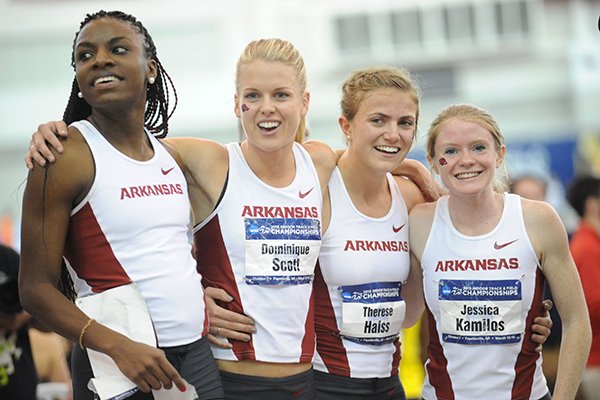 FAYETTEVILLE -- Arkansas is the only women's program that has won SEC cross country and indoor and outdoor track and field championships in the same school year, and the Razorbacks have done it twice.

After Arkansas swept all three SEC titles during the 1999-2000 and 2000-01 school years to win the triple crown, then won the 2002 cross country meet, Razorbacks Coach Lance Harter got a sense of the frustration level the other conference coaches were feeling.

It was December 2002, but during a coaches' meeting in Birmingham, Ala., no one was in a giving mood toward Arkansas.

"We're at a round table in the SEC offices and one of our coaching peers said, 'This has got to stop. People have got to start recruiting better quality distance runners and break up that monopoly Arkansas has and make it more of an even competition,' " Harter said. "There were a lot of smiles in the room, and a frown from me."

Harter declined to name the coach who spoke up, but he said he could tell everyone else -- except himself -- agreed.

"I think that it was one of those situations where they were all thinking it and finally one spoke out," Harter said. "Then it was a free-for-all.

"Did I feel that I was marked man? No doubt about it."

Harter is a marked man again as Arkansas prepares for the SEC Outdoor Championships, which will be held Thursday through Saturday in Starkville, Miss.

The Razorbacks, who won the NCAA Indoor championship, are going for their third SEC triple crown after winning the cross country and indoor track meets earlier this school year.

Harter said Arkansas, ranked No. 1 nationally in this week's coaches poll, is in a three-team race for the SEC title along No. 4 Florida and No. 9 Texas A&M.

Georgia is ranked No. 3, Kentucky No. 6 and LSU No. 8, but Harter said the Razorbacks, Gators and Aggies have the quality depth needed to win a conference meet.

"We'll be the favorite," Harter said. "But Florida and A&M could win it if we falter and they have some people break through."

Arkansas won the SEC Indoor title with 130 points while Florida was second with 86 and Texas A&M third with 81 1/2, but the Razorbacks won't have two All-Americans -- long and triple jumper Tamara Myers and sprinter Sparkle McKnight -- who competed for them indoors.

Myers' eligibility ended with the indoor season and McKnight has an immigration issue, Harter said.

McKnight, who ranks fourth in the SEC in the 400-meter hurdles this season and runs on Arkansas' No. 2-ranked 1,600 relay, was visiting family in Trinidad and Tobago during a recent weekend and was denied re-entry to the United States when she flew into Houston.

Harter said immigration officials are being vague about why they aren't allowing McKnight back into the country, but that Arkansas has lawyers working on the situation.

"We're more concerned with getting her back to finish her degree," Harter said. "She only has another semester to go."

Arkansas still has plenty of firepower, including NCAA champion pole vaulter Sandi Morris, the college record holder at 15-1 3/4; NCAA champion Dominique Scott, who will run the 1,500 and 5,000 in which she's the SEC's top-ranked runner; Chrishuna Williams (ranked first in the SEC in the 800); Diane Robison (ranked second in the the 5,000 and third in the 1,500); Jessica Kamilos (ranked first in the 3,000-meter steeplechase); Taylor Ellis-Watson (ranked second in in the 200); and Alex Gochenour (ranked second in the heptathlon). Robison is expected to run her first 10,000.

Harter said he hasn't talked a lot to the team about winning an SEC triple crown, but that the Razorbacks are well aware of the opportunity.