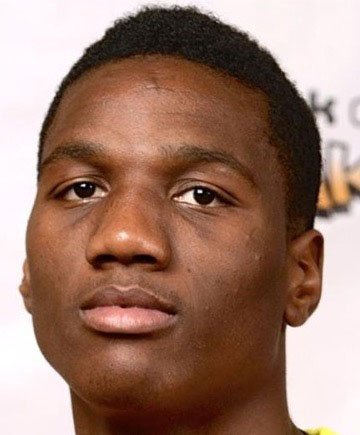 Power forward Ebuka Izundu reportedly had an enjoyable official visit to Arkansas over the weekend and will announce his college decision Wednesday.

Izundu, 6-9, 210 pounds, of Charlotte (N.C.) Victory Christian Center School, signed with North Carolina-Charlotte in November but was given a release after Coach Alan Major and Charlotte parted ways.

Izundu previously officially visited Cincinnati, Tennessee and Miami, and will choose from those schools and Arkansas. He was considering a visit to Texas Tech this weekend, but decided to not make the trip.

McCain said Walton Arena, along with the nearly completed practice facility and the student-athlete center under construction, impressed Izundu.

"They've built a lot of new stuff for the student-athlete, athletically and academically," McCain said. "He was extremely impressed with that."

Izundu, who has a 7-foot, 4-inch wing span, averaged 21 points, 15 rebounds and 6 blocked shots per game last season. McCain said Izundu would comfortable being a Razorback.

"He absolutely feels like he can fit in with the players and the staff," McCain said. "It would be a good fit for him on and off the court. He was very pleased with everything and would be excited if he should decide to go here."

McCain also said Izundu, who is from Lagos, Nigeria, was excited about his potential role should he become a Hog after spending time with Arkansas Coach Mike Anderson.

"Just the way he treats his players and just how productive they've been with guys at his position," McCain said.

Izunda was hosted by Arkansas guard Manuale Watkins and center Moses Kingsley, who is also from Nigeria.

"He loves them," McCain said.

Arkansas might get a visit from one of the nation's top linebackers.

Tre Lamar, who's rated the No. 3 inside linebacker and No. 106 overall prospect by ESPN, was able to catch the Hogs in action last season.

"I was at the Mississippi State-Arkansas game and watched them play," Lamar said. "I like how aggressive they are and how they play physical."

"I'm considering going up there this summer," Lamar said of Arkansas.

"How they're trying to get more linebackers in this class and how it would be an opportunity for me to play," Lamar said. "He was telling me about the town and how people envision it. I guess it's a bigger city than what people would think."

Lamar also said Segrest has pointed out that Houston Texans defensive lineman J.J. Watt was a walk-on under Arkansas Coach Bret Bielema when he was at Wisconsin.

"I think it's definitely a testimony to their development," Lamar said. "Just how you come in as one player, but you come out even better and it's a testimony to how well they coach."

In order to narrow his list of schools, Lamar said he relies on the conversations with coaches and trips to schools.

"You kind of develop relationships with some better than others off the bat," Lamar said. "I've been trying to get to as many schools as I can over the time I've been getting recruited. So I'm definitely trying to see what I do and don't like and rule things out from there."

He said his communication with Segrest has given him a better understanding of the Arkansas program.

"I think we've developed a relationship that's been pretty good just on the phone and through Twitter," Lamar said. "I would say it's a good relationship between he and I."

Lamar, who has a 3.4 grade point average and is considering civil engineering as a major, will likely make his college decision during the season.

"I want to make a decision this fall, sometime near that time," he said.