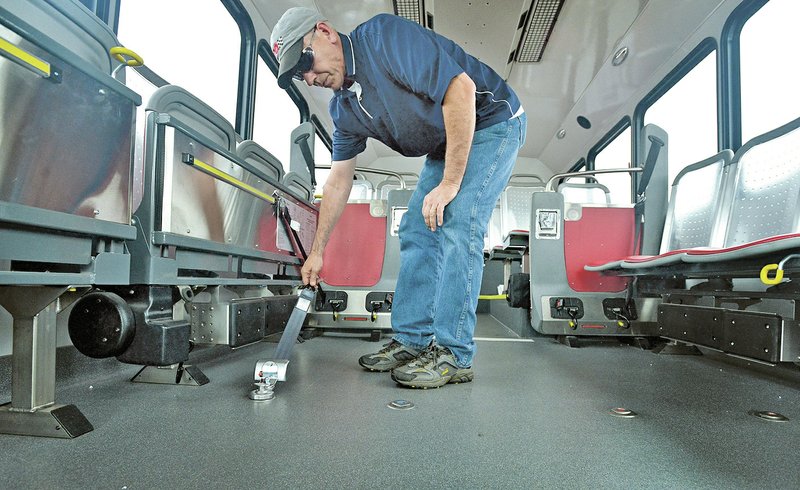 NWA Democrat-Gazette/BEN GOFF Joel Gardner, executive director of Ozark Regional Transit, demonstrates the setup of one of the quick-release wheelchair tie downs in an ARBOC Spirit of Liberty bus Sunday at the Ozark Regional Transit headquarters in Springdale. The modern bus design is larger than many of the ones currently in the Ozark Regional Transit fleet, with an occupancy of 52 and the option to flip up seats to accommodate up to six wheelchairs. A fold-out ramp with a 1,000-pound capacity, combined with kneeling suspension, would make getting on easy for passengers. For photo galleries, go to nwadg.com/photos.

SPRINGDALE -- Ozark Regional Transit will soon use an alternative fuel to transport some of its passengers.

A Kum & Go station near the agency's main office at 2423 E. Robinson Ave. recently began selling the fuel and it's expected another Kum & Go at Interstate 49 and Elm Springs Road will also offer it, said Rich Davis, manager of community and government affairs for Source Gas.

The fuel is also sold at other stations in Fort Smith, Conway, North Little Rock, Little Rock, Damascus and Jonesboro.

The authority's new vehicles cost $101,968 each, Gardner said. About $345,000 came from the Surface Transportation Program under the Federal Highway Administration, while $60,000 came from a matching grant from the Northwest Arkansas Economic Development District.

The authority invested less than $19,000 of its own money.

The four new buses will be used for routes in Springdale and for paratransit, which is door-to-door transportation for people with disabilities, Gardner said. The transit system plans to put the buses into service within the next two to three weeks.

In the meantime, necessary work will be completed, including inspections, test runs and equipment installations.

"We look for any anomalies," he said.

Use of compressed natural gas for buses is growing in popularity, said Richard Kolodziej, immediate past president of Natural Gas Vehicles America who retired in January. It produces less emissions than gasoline. There is also a significant cost savings compared to gasoline.

"There's just a whole host of benefits that go with that," he said.

The compressed natural gas buses cost $20,000 more per bus than those that use gasoline or diesel, Gardner said. The upgrade would pay for itself in fuel savings at the end of four years. He said buses that use conventional fuel last an average of eight years, but he said he hopes the four new vehicles will last 10 years.

The cost savings could also help keep transit prices low for bus riders, Gardner said. Fixed-route fares range from 60 cents to $1.25 and some riders travel for free, such as children.

"All in all, the more money we save the better off we are," he said.

Gardner said he hopes to add more compressed natural gas buses to the authority's fleet in the future, but there is not yet a plan to do so. The authority would either need more stations offering the fuel or an on-site fueling station to have a larger group of compressed natural gas buses. An on-site station would cost from $1 million to $2 million.