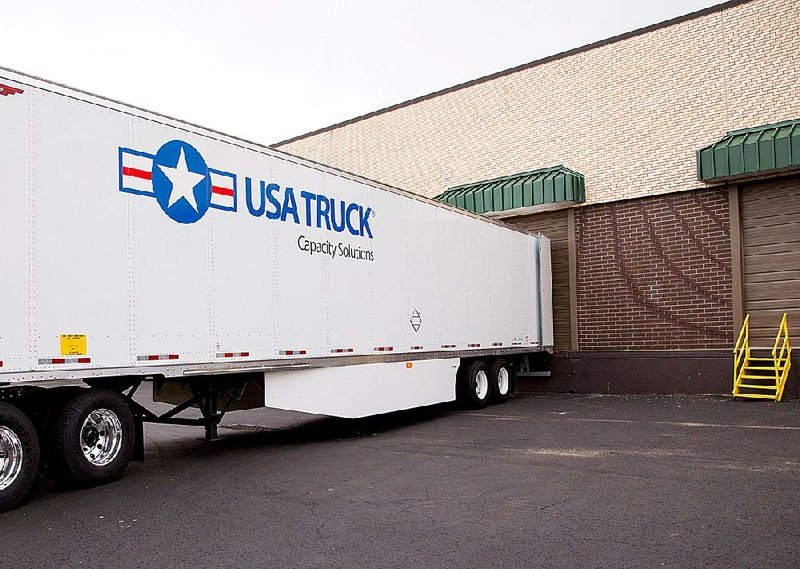 Special to the Arkansas Democrat-Gazette - 05/08/2015 - A USA Truck capacity solutions semi backs up to a loading dock.

USA Truck isn't changing its name or ditching its roots as a trucking company.

The Van Buren-based business wants to make it clear to customers there's much more to the services it can provide, though. So USA Truck has made a subtle tweak to its brand, adding the phrase "Capacity Solutions" to its recognizable bar and star logo.

The change puts a spotlight on what USA Truck describes as a "customer-driven" shift from a trucking company to a capacity solutions provider. Interim Chief Operating Officer Tom Glaser highlighted the shift during the company's first-quarter earnings call Tuesday and it was emphasized once again by executives after USA Truck's shareholders meeting.

"We're certainly not trying to change the name or the history here," said Russell Overla, the company's executive vice president for truckload operations. "It's changing the perception of being just a truckload carrier. We want to make sure that if you're looking for a way to move freight, a freight solution, we want to make sure you're looking at us for all of our opportunities that we could provide."

Like most of the nation's top transportation companies, a key part of USA Truck's business plan is getting customers to use multiple divisions. The revenue potential is vital in an industry where a driver shortage forces companies to search for alternative ways to meet the needs of customers.

In addition to its truckload operations, USA Truck provides dedicated contract, freight brokerage and intermodal services. The company also has service to and from Mexico, which can account for 10 percent to 15 percent of the truckload business, according to Malone.

The array of offerings is nothing new. USA Truck began its intermodal and freight brokerage business -- Strategic Capacity Solutions -- in 2007. But the company believes the extra emphasis will be beneficial in its goal of becoming even more of a one-stop shop for customers.

"We've been setting up the foundation to be able to do it," Overla said about the shift to becoming a capacity solutions provider. "I think in 2014 we were certainly able to move to 2015 and put this branding out there. We're better prepared for it now than we were then."

Simone, 53, revealed his medical condition in a letter addressed to colleagues and shareholders this week, saying he has been undergoing chemotherapy since taking a leave of absence from the company on April 6 and has radiation treatments planned, as well.

USA Truck had not revealed the exact reason for Simone's absence, at his request, until sharing the letter. In it, Simone also said that in March he had suffered cerebral vascular accidents -- or strokes -- that affect his speech. Doctors discovered lung cancer while looking for the cause of the strokes.

"Several weeks into the treatments, I am feeling much better," Simone wrote. "My strength is returning, my speech is improving, and I am looking forward to returning to active involvement in the business. My doctors have not finalized their recommendations on my ability to travel or return to USA Truck in a full-time capacity. I intend to return as soon as medically advisable, and I am hoping that will be sometime this summer."

Simone commended colleagues for their continued efforts on behalf of the company in his absence, saying he was "grateful and humbled, but not surprised, by their dedication and performance."

USA Truck reported $1.1 million in earnings for the first quarter of 2015, which was the company's 10th consecutive quarter of year-over-year financial improvement. USA Truck's motto for 2015 is "Even Better" as it continues to grow its reputation as a capacity solutions provider.

Paul Silverlieb, USA Truck's marketing director, described the new brand initiative as a "soft transition." The company won't strip the previous logos off its trucks, trailers and other equipment, but will put "USA Truck Capacity Solutions" decals on new equipment brought into service.

The new decals will be more visible, too, stretching 18 feet across trailers. It's a big change from the original logo, which was 5 feet wide. The USA Truck Capacity Solutions logo also will appear on sales materials, signage, the company's website, press releases and driver recruiting advertisements.

"We're not identifying as a trucking company," Malone said. "We want them to think of USA Truck when they have any need and any mode. Obviously we have some boundaries, but we're going to continue to look to reinvent ourselves and expand those boundaries. Our customers are buying it. We feel like our success, we're only in the beginning stages. There's much more to achieve."