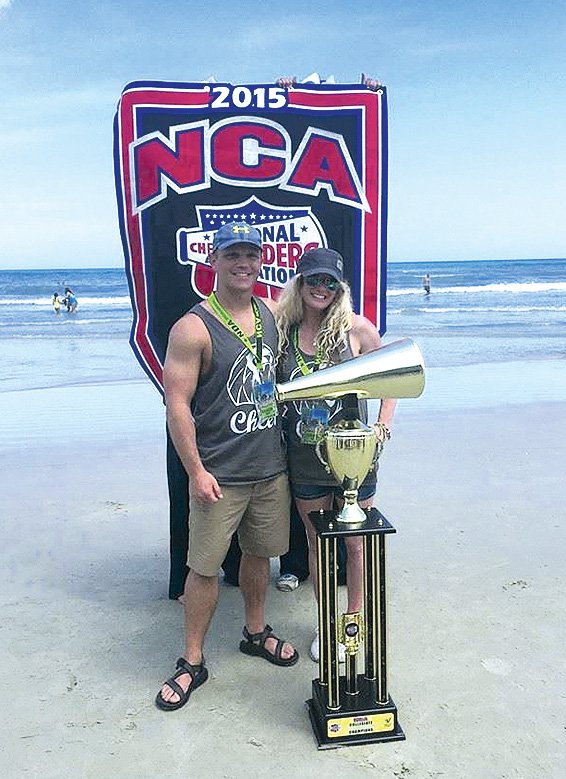 It turns out, mortuary schools don't have cheerleading scholarships.

So when Stacey Kohles had to choose between her two life ambitions -- cheer and funeral science -- the young adult landed on the mat. Although she dabbled in dermatology, psychology and dreamed of opening a flower shop, the Fort Smith native eventually started Arkansas Cheer Unlimited in 2003 and has never looked back.

Sophia Acensio-Porter was killed on June 20 in an automobile accident just south of Gentry. The 18-year-old had been chosen as a member of the UAFS cheer squad just a month before.

After her death, the 19 remaining members of the squad rallied, devoting their season to her memory.

At the national championship competition in April, the UAFS squad paused 30 seconds before the end of their competition routine in Daytona, Fla., as a planned voiceover interrupted their music.

“We have 19 on the mat and one angel in the sky. It’s our promise to you that your memory never dies.”

The team says it gave them strength to push through to the end and win it all.

"Being a full-time cheer coach as an adult was not at all what I had planned," she said with a laugh. "But when you get into this industry -- cheer -- you realize you are always reaching. You can never accomplish enough because you are always setting goals higher and higher for yourself. So I think, I just never stopped cheering because there was always another challenge."

Four years ago, Kohles' lofty goals led her to the University of Arkansas at Fort Smith, where she took on her biggest challenge yet: the university's only cheer squad.

And pressed for time.

"Our cheer squad does everything," Kohles said. "They have to learn quick. They're busy, but they learn very good time management skills."

It's management skills they truly need, said 2014-15 cheer squad captain Andrea Wallace. Having cheered on a squad since her freshman year in high school, the junior mechanical engineering major is used to splitting her time between cheer and school, she said. But the cheer squad at UAFS is a totally new animal, she added.

"I competed through high school with Arkansas Cheer Unlimited, but in college cheer, you are a lot more free," she said. "It's more exciting -- cheering at games. But with competition -- well, once the basketball season is over -- we really have to kick it into gear. And we did it."

The NCA Championship is a two-day long competition among 10 intermediate-level coed teams held annually in Daytona Beach, Fla. The team had performed in the competition for the previous two years, earning fourth place last year and vowing to come back harder.

And they did. With only one month of training.

"Well, technically they are preparing all year," Kohles said. "Everything they do throughout the year prepares them for the competition, but we don't really start working on choreography until about a month before competition."

The cheer squad goes through what they call "Hell Week," and with a 5 a.m. call, the five intense and often 18-hour days live up their name.

"That's when they're learning ail the choreography and the routine," she said. "The last two weeks before competition is just putting it together. It's overwhelming for them at first, but then they realize they have learned all these skills throughout the season -- we're just making them more fancy."

The season began last May, when 19 full-time students and three alternates were chosen for the squad. The team consists of about half newcomers.

Also among the newcomers was an 18-year-old Gentry cheerleader who would ultimately lead her team to victory, her squad says.

Sophia Acensio-Porter joined the UAFS squad after graduating from Gentry High School in 2014. But before the teen was able to step foot in a college classroom, she was killed in a car accident.

"It was really hard because Sophia -- she was truly a very sweet person, very well spoken," he said. "I remember meeting her and immediately wanting her on the team. We didn't know what to do when we lost her. We were just quiet."

But the lack of direction didn't last long.

The team found strength and inspiration in the memory of their beloved teammate, and in tribute the squad dedicated their national championship competition routine to Sophia.

"I think it had an impact on us winning the championship," Wallace said. "And throughout the year. Whenever things got hard, whenever we got up at 5 a.m. and were tired and hurt -- she was there. She was with us. We knew we had to try because she was there trying with us."

Print Headline: To the mats