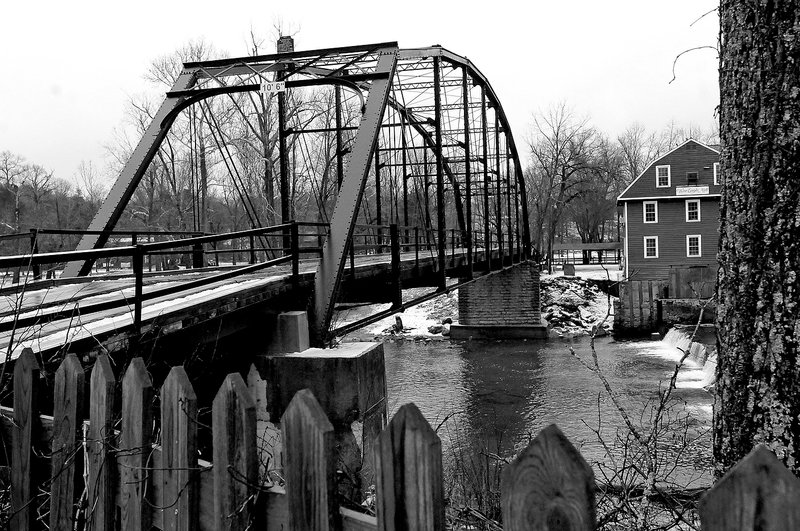 Sometimes, the gap between what some people want and what government can provide is simply too wide to bridge.

The War Eagle Bridge has spanned the creek from which it got its name since construction in 1907. Unlike most modern bridges, the one-lane, wood-decked structure in eastern Benton County is a joy to cross on foot, on a motorcycle or in a car. Cruising through the steel truss framework is more than just a link to the other side of the creek. It's a connection to the region's colorful history, residing next to a privately owned mill built in the 1970s on top a foundation where predecessors had operated since the first half of the 1800s. It's a man-made centerpiece of a beautiful valley, known today for its semi-annual crafts fair.

Benton County government’s mission as it relates to bridges is about safe transportation, not historic preservation.

The bridge is the responsibility of the Benton County Road Department, which is charged with building and maintaining a rural transportation system that can meet the demands of 21st century traffic. When it comes to bridges, county government's mission is not historic preservation. It's about building and maintaining bridges for county residents and visitors who need the assurance of safety in crossing creeks, streams and gullies.

Benton County is in a quandary, though. County judge after county judge has expressed a desire to preserve the old bridge even as they've considered construction of a new bridge to handle today's traffic demands. In 2010, the county spent more than $600,000 to replace the decking and shore up its steel supports. By 2013, however, state inspectors had noted a multitude of problems from serious to rather routine. But the steel landmark has unquestionably seen its better days. Estimates last year put the cost of a full renovation at $1.8 million.

Last January, a construction engineer for the Arkansas Highway and Transportation Department, which is responsible for all bridge inspections in the state, said a rehabilitation is possible, but is it worth it. "No," he said. "It's functionally obsolete."

And now this news: Benton County Judge Bob Clinard said he's struggling to find an engineering firm willing to even evaluate the bridge. Apparently, their reputations mean enough to them they're not willing to risk them on this ailing bridge.

Nobody, including Clinard, supports demolition of this lovely bridge. The question is whether to continue relying on it for modern traffic across War Eagle Creek or to find a new way to cross. Does Benton County focus on functionality and safety or devote its resources to a different mission, one of charm and aesthetics?

From a historic perspective, the bridge must be kept. From a transportation standpoint, there's not a rational argument for devoting a couple of million dollars to shore it up for what would remain an uncertain future capacity.

Every family that's ever lived on a budget has had to make the choice Benton County faces: Do what can be afforded or do what's wanted. For county government, it's got to make financial and safety sense.

Advocates for saving the bridge as the primary crossing of War Eagle Creek want to save the bridge by devoting more tax dollars to it while not changing its aesthetics. Like we said, the gap between the sides on this issue is pretty wide.

The sure decision for Benton County government's mission is to build a new bridge for the long-term future. As long as county leaders don't take any advice from Washington County, that will produce the best transportation outcome.

Preservation of the existing War Eagle Bridge is a dream worth nurturing through private support. The bridge has done its job -- and beyond -- for the people of Benton County. Those who want to ensure the War Eagle Bridge remains a decorative centerpiece of its valley need to marshal the resources to do that. Benton County government should work cooperatively to smooth the transition, but its mission cannot become taxpayer-supported devotion to a bridge that's inadequate to the county's needs.

Ultimately, the War Eagle Bridge built in 1907 is no match for the transportation demands of 2015 and beyond. That's where Benton County's priorities must remain, as unromantic as that perspective seems.

Print Headline: A bridge too long