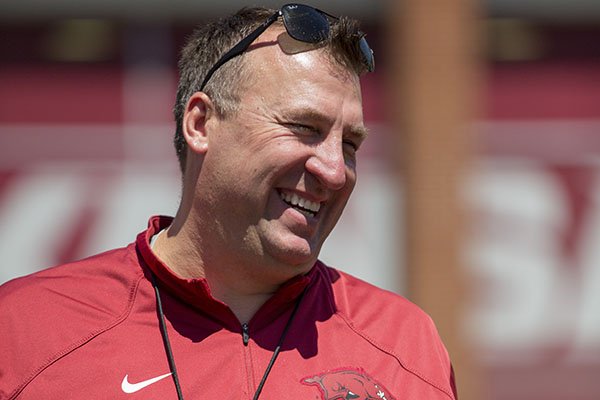 FAYETTEVILLE -- If Arkansas football Coach Bret Bielema's postspring news conference is any indicator, he won't be downplaying rising expectations for the Hogs as the 2015 season approaches.

Bielema listed a myriad of reasons why things are looking up for an Arkansas program that won three of its final four games in 2014, including a 31-7 beatdown of Texas in the Texas Bowl, to finish 7-6 in Bielema's second season.

Things continued to progress this spring, so much so that Bielema said the Razorbacks were "no ifs, and or buts" a good team.

Bielema continued his positive assessment when meeting with members of the media in the aftermath of the April 25 Red-White game, explaining that he wanted his players to understand they should be expected to have success. Here's why:

• "You've got a fifth-year senior quarterback.

• "You've got a couple tight ends that I think are good."

And then Bielema talked about the defense.

• "We have a scheme that I think is very, very success-oriented. The teams I've seen run it have had a lot of success, even though they might not have had marquee names or players. So I felt good about that. I just wanted our players to understand, we're expecting to win some games."

Bielema said he and the coaching staff were tough on the players on the field and in the meeting rooms.

"We've got to kind of tear them down a little bit to build them up and let them understand there's no tackle or touchdown from last year that's going to appear on this year's stats," Bielema said. "You've got to go out and do it all over again. I just wanted to get that point across to our guys."

Eight areas stood out for the Razorbacks following spring practice:

Three linemen who signed after Arkansas' 11-victory season in 2011 will be the backbone of this year's defense. Taiwan Johnson, JaMichael Winston and Deatrich Wise Jr. should all be impact players on the front four, and if Brandon Lewis returns from an injury-plagued run, he'll be in the mix as well. All four of those players, and the recently drafted Darius Philon, signed in Bobby Petrino's final class.

"They hit it good on that one class," Bielema said. "They're all really good players. ... We're as deep as I've ever had it as a head coach, and to be successful in the SEC, that's something that has to be out there."

It's not just those four.

DeMarcus Hodge has committed himself to a big senior finish, pairing with 2014 signee Bijhon Jackson at nose guard. Transfer Jeremiah Ledbetter and freshman Hjalte Froholdt, signees who went through spring, should help right away. Mitchell Loewen is expected to return from shoulder surgery, and players like Armon Watts, Karl Roesler and Jake Hall are progressing well in the system.

Fifth-year senior Brandon Allen seems reinvigorated by the arrival of Dan Enos, an ex-quarterback, as offensive coordinator and he had a strong spring to prove it. Allen had a more commanding presence in the huddle, showed more zip on his passes and did not throw an interception during team periods or scrimmages in the spring.

If Allen improves on his 56-percent completion rate and his 20 touchdowns and 5 interceptions from 2014, the Razorbacks should rank in the upper third of SEC offenses.

Bielema said he thinks the top 15 Arkansas players on both sides of the ball are good SEC players, but the Razorbacks will have to go beyond 30 deep to stay in the SEC West race. The offensive line is a good example, where the starters stack up with any in the SEC. But assistant coach Sam Pittman needs to find four or five dependable second-teamers among a mostly inexperienced group during fall camp.

Bielema was not as complimentary with Arkansas' recruiting efforts on this unit before his arrival as he was with the defensive front. The Razorbacks could also stand to be deeper at linebacker and safety and could use more big-time receiving talent.

It's clear Arkansas' coaches know exactly what junior Hunter Henry can do and there's no doubt he'll be unleashed when the whistle blows for real in the fall. The encouraging signs of spring were that Jeremy Sprinkle looks like a star in the making, former walk-on Alex Voelzke is a quality option, Jack Kraus is on the rise and signee Will Gragg is ready to join the recent procession of standout Arkansas tight ends that started with D.J. Williams and Will's brother, Chris Gragg.

New linebackers coach Vernon Hargreaves tried different players at different positions, something Bielema believes in, and the results looked promising by the end of spring. Brooks Ellis seems set at the prime weakside spot that Martrell Spaight shined at last year, though he could slide back to the middle in a pinch. Josh Williams' athleticism looks suited for the strongside role, which could have heavier pass-rushing duties in 2015, and the junior can also play the middle.

Sophomore Khalia Hackett trained at the"Mike" and "Sam" spots and is a willing hitter who seems primed for a breakout year. The Hogs have their fingers crossed Randy Ramsey can take the academic steps necessary to stay eligible because he's a great talent who could provide X-factor impact.

Senior Keon Hatcher appeared to shake off the dropped-pass knock on him in 2014 after failing to secure a would-be huge gainer in the opener at Auburn. But other Razorbacks who could be in position to emerge -- like Damon "Duwop" Mitchell and Jojo Robinson -- had too many drops in the spring. Jared Cornelius dropped a pass on the first play of the Red-White game, but the sophomore was pretty steady otherwise and should be a dependable option next season.

The tight ends also had a few forehead-slapping drops in the spring. The Razorbacks need to keep drops to one or so per game, and their spring performance trended higher than that.

Kickers Adam McFain, Cole Hedlund and Lane Saling put on an impressive display throughout the spring, with each hitting 80 percent or better on field-goal tries. The most encouraging part for the Razorbacks was that McFain and Hedlund showed range beyond 50 yards, which was a missing element for the 2014 team.

Toby Baker's lone college punt -- an opportunity he received to help prod struggling Sam Irwin-Hill at the time -- was a 36-yard line drive against Alabama-Birmingham that was returned 35 yards to the Arkansas 10. Baker will have a net average much better than 1.0 if he wins the job over signee Blake Johnson in fall camp. Baker blasted punts in the special teams work open to members of the media, including an average of 56.5 yards on two punts in the Red-White game.

Jared Cornelius should give punt returns more wiggle, and some combination of Keon Hatcher, Eric Hawkins, Alex Collins and others should take on kick-return duties.

Arkansas would also appear to have a bigger collection of talented young players to fill the coverage and return units in 2015, which should lift the level of play on all the kicking teams.

Bret Bielema wanted a greater focus on ball security during the spring and the additions of Dan Enos at offensive coordinator and Jemal Singleton as running backs coach hammered that home. Not only did Brandon Allen not throw an interception in team periods, the ball carriers had very few fumbles in spring drills.

Bielema's core beliefs for winning games involve controlling the clock and winning the turnover battle. The Razorbacks were much better in those departments in 2014 than they were in Bielema's first season, and they project to be better yet this fall.

The flip side of the offense's vise grip on the ball is that the defense did not force a pile of turnovers from their counterparts. The Razorbacks were tied for 34th nationally with 24 takeaways last season and tied for 27th with a turnover margin of plus-.54 per game.