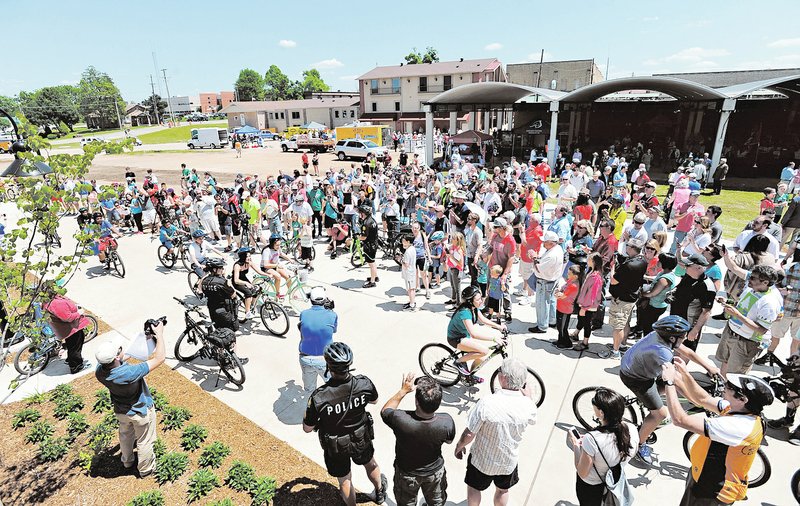 NWA Democrat-Gazette/ANDY SHUPE Residents gather Saturday to watch the ribbon cutting during a dedication ceremony for the Northwest Arkansas Razorback Greenway&#8217;s opening on Emma Avenue in Springdale. Visit nwadg.com/photos to see more photographs from the event.

The morning was warm and bright as cyclists clad in vivid primary-color jerseys and smelling of sunscreen clustered along Fayetteville's Frisco Trail near West Dickson Street. By 9:30, they numbered around a hundred. Half an hour later, there were almost twice as many.

Natalie Becknell pointed her bike north as the crowd gathered, ready to ride to Springdale with her 2-year-old son, Robert, strapped in to the seat mounted behind the handlebars.

"I'm getting goosebumps," Becknell said happily, her husband and daughter ready nearby. "We have so many people who bike for pleasure and to get places. To be able to go all the way from south Fayetteville to Bella Vista -- it's huge."

More than a thousand Northwest Arkansas residents Saturday celebrated the official completion of the Razorback Greenway, a trail threading almost 37 miles through the metro area that officials hailed as a shining achievement of regional cooperation. People of every age and color enjoyed food, free train rides and history walks at several points along the trail under sunny skies and temperatures in the 70s.

For many, the best way to mark the occasion was simply to bike the trail from end to end.

"Don't want to miss an inch of it today," said Jim House, a former Fayetteville state representative who came with his wife, Nan. Nan House looked a bit nervous at the prospect, saying her husband was the more serious biker, but she smiled with excitement nonetheless.

"It's a beautiful trail with a whole lot of private and public investment," Jim House said.

Cities and regional planners have discussed and planned the $37 million project for a decade. Federal money and a $15 million grant from the Walton Family Foundation gave it life, and builders broke ground in June 2012.

"This is a dream come true," John McLarty with the Northwest Arkansas Regional Planning Commission told a crowd of hundreds of people at Shiloh Square in downtown Springdale, where a ribbon-cutting was held at noon. Roughly 150,000 people live or work within half a mile of the trail, he said. "The workload on this has been worth it."

Mayors of the four major cities and other officials also spoke at the event, praising the completed trail as a boon to the area's economy and quality of life. Dozens of miles of smaller trails branch off the Greenway, they said, and all the area's residents can use it no matter their income level or experience.

"The greenway's the catalyst we needed to really begin the revitalization of downtown Springdale," Mayor Doug Sprouse said to applause from the crowd. "This has been a great day already."

The speakers thanked several people and organization involved in the project, including the Alta Planning and Design firm and the state Highway and Transportation Department.

The Springdale gathering had a festival-like feel. Multicolored flocks of cyclists cruised past the square under the bright sunshine throughout the day, winding between pedestrians as pop music played from the stage and the breeze picked up. Workers in neon-green vests kept a watchful eye on hundreds of bikes leaning on metal racks on Emma Avenue. Nearby food booths and trucks sold tacos and lemonade.

"It's awesome, honestly, to see our community just come together and be active," said Diane Velasquez of Rogers, 22, who rode with a group of church friends and family members that calls itself Cycology FOW, standing for friends on wheels.

Velasquez said she had only been a member for three weeks, but the group planned a full 37-mile ride for the day.