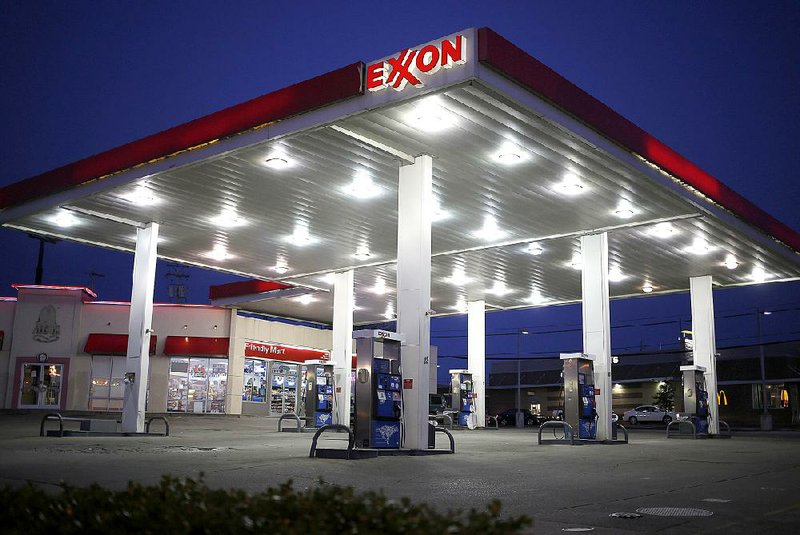 The pumps were idle at an Exxon Mobil Corp. gas station in Richmond, Ky., on Wednesday. The oil company on Thursday reported a first-quarter profit of $4.94 billion. - Photo by Bloomberg News / LUKE SHARRETT

Exxon Mobil Corp. on Thursday posted its biggest earnings surprise in at least a decade as output from oil wells surpassed expectations and refining margins soared amid lower crude prices.

Per-share profit was 41 percent higher than the average of 21 analysts' estimates compiled by Bloomberg, the largest margin since at least 2004.

As slumping crude prices eroded oil-production profits, net income in the first quarter dropped to $4.94 billion, or $1.17 a share, from $9.1 billion, or $2.10, a year earlier, the Irving, Texas-based company said in a statement Thursday. Even so, the per-share result exceeded every analyst's forecast.

"It looks like it was a strong quarter for them," Brian Youngberg, an oil-industry analyst at Edward Jones in St Louis, said in a telephone interview. Oil "production grew a little bit more than anticipated and refining was good internationally, which has been a common theme this quarter" among the biggest energy companies.

The world's biggest oil producer by market value pumped 2.28 million barrels of crude during the January-through-March period, a 6 percent increase from a year earlier, according to the statement. The figure surpassed the 2.2 million-barrel average estimate from analysts.

Profit from Exxon's global network of refineries more than doubled to $1.67 billion as plants outside the U.S. posted an almost sixfold increase in results. The company's international refining business took advantage of tumbling crude costs to process more oil in every market in which it operates except the Asia-Pacific region.

Chemical earnings fell 6.2 percent to $982 million, mostly because of currency fluctuations, according to the statement.

Exxon shares fell 50 cents to close Thursday at $87.37 in New York trading. Before Thursday, the shares had fallen 5 percent this year.

Exxon has been in the vanguard of curbing expenses and reassessing costly new projects to cope with global oil prices that fell to about $45 a barrel at the start of the year. A glut of crude from new wells in North America, the Persian Gulf and Africa swelled U.S. inventories to the highest since the 1930s, said Mara Roberts, North American oil and gas analyst at Fitch Group Inc.'s BMI Research.

The plunge in international crude hit Exxon as the company already was grappling with U.S. and European Union sanctions against Russia that trapped as much as $1 billion of Exxon investments in the country and cast doubt on its long-term growth plans. As Chairman and Chief Executive Officer Rex Tillerson entered the 10th year of his tenure, Exxon was hobbled by an exploration failure rate that climbed to 39 percent in 2014 from 33 percent a year earlier.

Brent crude, the benchmark for most of the oil traded internationally, averaged $55.13 a barrel during the first quarter, down 49 percent from $107.87 a year earlier. In the U.S., the source of almost one-third of the company's global natural gas supplies, the fuel averaged $2.809 per million British thermal units during the quarter, 40 percent less than in the year-earlier period.

Tillerson, a 63-year-old University of Texas-trained engineer who's spent his entire career at Exxon, was ahead of the industry curve in slowing spending. Even as crude topped $115 a barrel last year, Tillerson was overseeing a 9.3 percent reduction in spending on drilling, refineries and chemical plants. The cut expanded to 12 percent for 2015, when Exxon is scheduled to spend $34 billion on capital projects.

Tillerson said earlier this month that industry observers anticipating an imminent rebound in crude prices will be disappointed. Low prices appear likely to persist "for the next couple of years" at least, he said at the IHS CERAWeek conference in Houston on April 21.

Royal Dutch Shell fell in line with the trend Thursday when it reported first-quarter profit, adjusted for one-time items, of $3.2 billion, above the $2.5 billion average analysts' estimate.