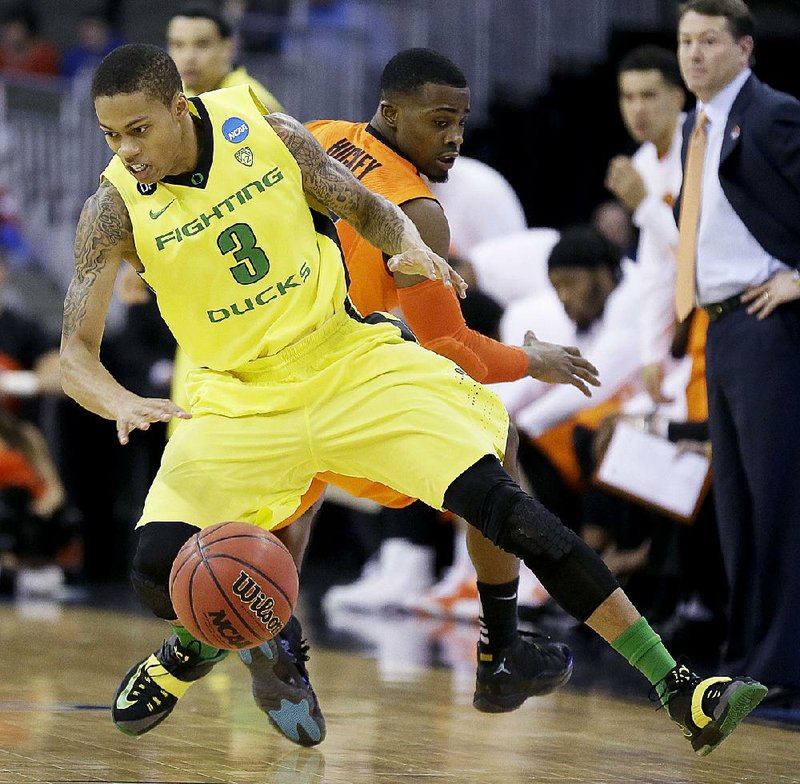 Oregon guard Joseph Young (3) drives around Oklahoma State guard Anthony Hickey Jr. during the first half of an NCAA tournament college basketball game in the Round of 64, Friday, March 20, 2015, in Omaha, Neb. (AP Photo/Charlie Neibergall)

OMAHA, Neb. -- Oregon's Joseph Young checked his phone at 8 a.m. Saturday and saw that someone had left him a text message. It wasn't the congratulatory kind he might have expected after his virtuoso performance the night before against Oklahoma State.

No, this one was from a buddy who just happens to play basketball for Wisconsin, a guy named Sam Dekker.

Silly question. Young has been ready for, oh, about 365 days, since the Ducks squandered a big second-half lead and lost 85-77 to Wisconsin in the NCAA Tournament's round of 32 in Milwaukee.

Sunday is the rematch at CenturyLink Center. Same round. Same stakes. This time the winner goes to the Sweet 16 in Los Angeles.

Young, from Houston, and Dekker, from Sheboygan, Wisconsin, became friends last July while attending the LeBron James Skills Academy in Las Vegas. The Ducks' meltdown in Milwaukee was a frequent topic of conversation during their down time.

"I was teasing him a lot last summer. 'How did you let your team blow the lead?' I tried to blame it all on him and make him feel bad about it," a smiling Dekker said.

Young actually was the least of the Ducks' problems. He scored 29 points against the Badgers, who went on a 25-9 run to wipe out a 12-point halftime deficit and took the lead for good on Ben Brust's three-pointer with about a minute left. Wisconsin ended up making the Final Four.

Young, who scored 27 points against the Cowboys, said he's watched video of last year's game against Wisconsin only once. The Pacific-12 player of the year said he sees no reason to relive that missed opportunity.

Oregon faces a tall task going against the front line of 7-footer Frank Kaminsky, the 6-9 Dekker and 6-8 Nigel Hayes. Freshman Jordan Bell, at 6-9, is the only Oregon starter bigger than 6-6, and he expects to spend much of his time trying to guard Kaminsky.

"That's one of my favorite players," Bell said. "I've tried to watch his moves, his tendencies."

Kaminsky, the Big Ten player of the year, can score inside and outside, but so can Dekker and Hayes. Bell and the Ducks saw their share of big men in the Pac-12, but they haven't gone against group as imposing as Wisconsin's.

"Dangerous, athletic, skilled, smart, poised," Bell said. "They don't really make many dumb plays and don't turn over the ball. It's going to be tough."