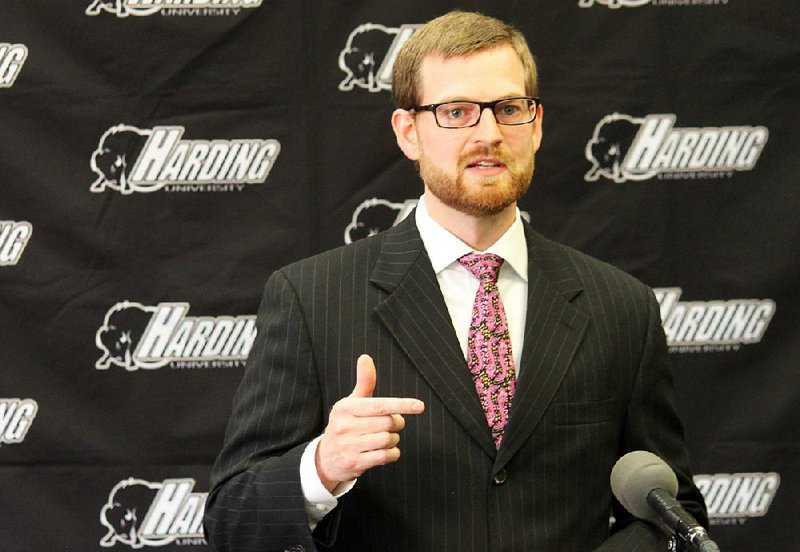 SEARCY -- It's hard to imagine a diagnosis worse than Kent Brantly's.

"It was a surreal moment when I received that diagnosis," Brantly, a family doctor, said at a news conference Tuesday at Harding University.

The Samaritan's Purse medical missionary was in Liberia in 2014, treating people with the disease.

"Every Ebola patient I'd seen but one had died over six weeks," he said. "It was the worst news a person could receive. But I was at peace, a peace that surpasses all understanding."

Brantly and his wife, Amber, were at Harding for his speech scheduled later Tuesday in the university's American Studies Institute Distinguished Lecture Series. He is best known as the first American to be flown back to the United States for Ebola treatment.

He missed much of that debate, including news helicopters flying over his ambulance as it drove from an airport outside Atlanta to Emory.

"I was oblivious to the events surrounding my entry into the country," he said.

Ebola is a virus. So is flu. He's had the flu, Brantly said, and they're not quite the same.

"I had an unrelenting fever for two weeks," up to 105 degrees, and was throwing up blood. "As a doctor, I know what that means."

Ebola, Brantly said, "is a humiliating disease. It strips away your dignity before it kills you."

Adding to the misery was the isolation. In Liberia, Brantly spent long stretches of time alone, in between visits from friends and colleagues.

"They were putting themselves as risk. At Emory, one of the greatest reliefs was that a nurse could stay at my bedside 24 hours a day."

The Brantlys have two children, 6 and 4.

"My thought when he was sick was he was leaving me behind," said Amber Brantly, a nurse. "I wasn't ready to be a widow and a single mom."

Since then, Brantly has achieved a measure of renown.

"I get recognized when I least expect it. Anyone who approaches me has been supportive." Some other survivors, he said, have been treated poorly.

Another Ebola survivor, Nancy Writebol, is on her way back to Liberia with her husband, David, Brantly said.

Brantly's return is unclear. Right now, he's on the public speaking circuit and is writing a book with his wife, Called for Life: How Loving Our Neighbor Led Us into the Heart of the Ebola Epidemic, to be published later this year.

"God called us to be medical missionaries," Brantly said. "Now, I have a platform to touch a lot of lives and remind them this epidemic is not over."

Brantly said he's fully recovered. He speaks publicly to remind people the epidemic is not over, however.

"I feel some sense of responsibility to thank people. I know that in a place like Harding, there were thousands of people praying for me."

News about Ebola spiked in the United States and then retreated.

"Part of it is because it's out of sight, out of mind," Brantly said, "on the other side of the world. We forget the ones that are far away."