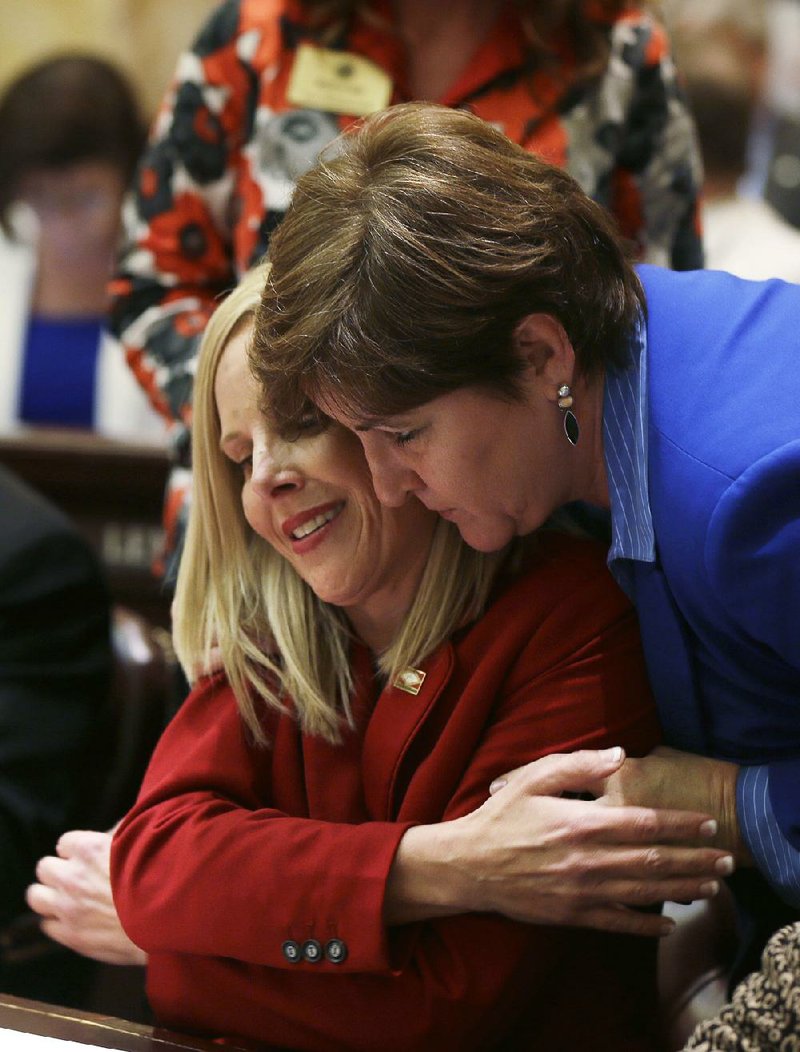 Rep. DeAnn Vaught, R-Horatio, left, is hugged by Rep. Camille Bennett, D-Lonoke, right, in the House chamber at the Arkansas state Capitol in Little Rock, Ark., after Vaught spoke in favor of a bill dealing with reporting of child maltreatment Monday, March 16, 2015. Vaught referred to her own childhood experiences in her speech supporting the bill. (AP Photo/Danny Johnston)

Correction: This story about legislative actions misstated the base Arkansas per-pupil education funding for the current year. It is $6,521.

The Arkansas Senate voted Monday for legislation creating a drug-screening and testing program for applicants for benefits in the Temporary Assistance for Needy Families Program.

The Senate sent the state House of Representatives legislation restructuring the state Board of Career Education and the governor legislation repealing the cap on ATM fees charged by state-chartered banks.

On the other side of the state Capitol, the House of Representatives handily approved legislation boosting the per-student funding that school districts receive to provide an adequate education to their students.

The bill would authorize the state Department of Workforce Services to establish and administer a two-year pilot program of suspicion-based drug screening and testing for each applicant and recipient for the Temporary Assistance for Needy Families Program.

The pilot program would include at least "ten percent of the program population statewide to be determined by the department" and all applicants and recipients in the counties bordering Mississippi, Missouri, Oklahoma and Tennessee and any other state bordering Arkansas with a drug screening or drug-testing program.

Drug testing will be conducted on the basis of the results of the drug-screening process when the department "has a reasonable suspicion that the applicant has engaged in drug use," based on the responses to the written questions to applicants, he said. Eligibility for benefits would be cut off for six months under certain circumstances, such as refusing to take a drug test and testing positive for drugs after a treatment period.

Sen. Linda Chesterfield, D-Little Rock, said the program would penalize people who "are foolish enough to incriminate themselves."

The program would begin by Dec. 31 and expire after a period of two years from the starting date of the pilot program under the bill.

"This would give us one year of good data before we come into session [in 2017]," Johnson said.

He said the cost for the drug testing has ranged from $20 to $50 per person in other states, but he doesn't know whether the program would save the state more than it would cost.

The bill goes to the House.

In a 34-0 vote, the Senate approved SB368 by Sen. Jane English, R-North Little Rock, which would overhaul the state Board of Career Education to improve the coordination of the state's workforce development programs.

English said the bill would require the governor to appoint up to 13 members to the board from private industry who will decide what training is needed for jobs in the state. Under existing state law, the board is composed of seven members appointed by the governor.

The legislation also would create a Skills Development Fund in the Department of Career Education to help high schools and two-year colleges with their technical training programs, she said.

It would allow school districts to use state funds targeted for low-income students to work with state-supported higher education institutions and technical institutes to provide concurrent course or technical education options for high school students so they are "college and career ready" when they graduate from high school.

The bills are headed to the House.

In a 33-0 vote, the Senate sent to the House legislation to abolish the state Board of Massage Therapy and transfer its duties to the state Board of Health. SB145 by Sen. Bill Sample, R-Hot Springs, also would create a seven-member message therapy technical advisory committee.

A bill to create the Arkansas Land Title Commission to regulate the business of title insurance and abstracters and abolish the Arkansas Abstracters Board failed to clear the Senate by one vote.

The Senate's vote was 17-9 on SB172 by Sen. Jeremy Hutchinson, R-Little Rock. The Senate later expunged the vote to clear the way for another vote on the bill.

In a 19-3 vote, the Senate approved SB912 by Sen. Bart Hester, R-Cave Springs, which would bar the results of a survey, inspection or investigation of a long-term care facility conducted by any state or federal agency from being used in an advertisement, unless the ad included certain information.

Hester said the bill is designed to apply to mailings of attorneys who are seeking business.

The bill goes to the House.

In a 34-0 vote, the Senate sent the governor House Bill 1641 by Rep. Reginald Murdock, D-Marianna, to repeal the cap for state-chartered banks on their usage fee at a customer-bank communication terminal.

The cap is $2, or 2 percent of the gross amount of the transaction, according to the bill.

Sen. Terry Rice, R-Waldron, said banks that aren't chartered by the state don't have their fees capped, so "it's a fairness bill."

In a 26-1 vote, the Senate sent to the House SB695 by Sen. Stephanie Flowers, D-Pine Bluff, which would make the University of Arkansas at Pine Bluff eligible to receive certain state collections generated from the electronic games of skill gaming at Oaklawn Park in Hot Springs and Southland Park in West Memphis that exceed $44.8 million in a fiscal year.

Under the bill, the state chief fiscal officer would transfer an amount each year to UAPB to allow the university to meet the state matching fund requirement under the Agricultural College Act of 1890.

She said the bill would promote the use of telemedicine to allow Arkansans, particularly in rural areas, to access health care specialists from urban areas. "We must be careful what we allow" and make sure health care providers are reimbursed for telemedicine services, Bledsoe said. The bill goes to the House.

The House voted 94-0 to approve legislation that would require the Department of Correction or the Department of Community Correction to reimburse county jails for medical care provided to state inmates housed at county facilities because of state prison crowding issues. The bill is HB1543, by Rep. Micah Neal, R-Springdale.

Counties have complained about slow reimbursement at too low of a rate from the state Department of Correction for housing the inmates, including more than $7 million in per diem prisoner reimbursements owed as of the beginning of the legislative session in January.

Counties also have complained that they are held financially responsible for medical care provided to state prisoners during the first 30 days that they are housed in a county jail facility because of crowding issues.

HB1543 would remove that financial burden by requiring the state to reimburse jails for pre-approved medical care or emergency care for the inmates. If something was not an emergency, the county jail staff would have to obtain pre-approval for the treatment. If it was an emergency, they would have to notify the Department of Correction within 24 hours of the treatment occurring.

The bill now heads to the Senate.

That per-student rate is multiplied by each district's average daily enrollment for the previous school year to determine the amount of base funding each will receive from the state.

The 11-page bill also sets the per-student funding for alternative learning environments, for learners of English as a second language, for high-poverty districts determined by the percent of students who qualify for the federal free lunch program, and for other programs. All of those per-pupil funding amounts increased slightly, with the exception of funding for professional development days.

The bill now heads to the Senate.

The House passed two measures designed to allow people to protect themselves in different situations.

In a 91-0 vote, the House approved HB1653, by Rep. Scott Baltz, D-Pocahontas, which would require each school district to install panic button alert systems.

Those alert systems would connect the caller directly to 911 and simultaneously notify on-site staff that the call had been made. The feature also would allow emergency personnel to access a floor plan of the school remotely, allow an alert to be sent out to wireless phones and have limited-user access.

In a 76-1 vote, the House also approved HB1203, by Rep. Kim Hammer, R-Benton, which makes minor revisions to the state's existing use of deadly physical force in self-defense. The legislation would add language saying a person is not required to retreat if they are "unable to retreat with complete safety."

Both measures are headed to the Senate.

The House voted 70-4 to approve a change to the state's Freedom of Information Act.

HB194, by Neal, would make the tax collection amounts for individual businesses that collect Advertising and Promotion taxes exempt under the 1967 Freedom of Information Act.

Neal said under the law, the total tax collections still would be public. But he said the individual businesses would no longer be public information because Neal said it has been hurting those businesses by releasing competitive information about their sales. The bill now goes to the Senate.