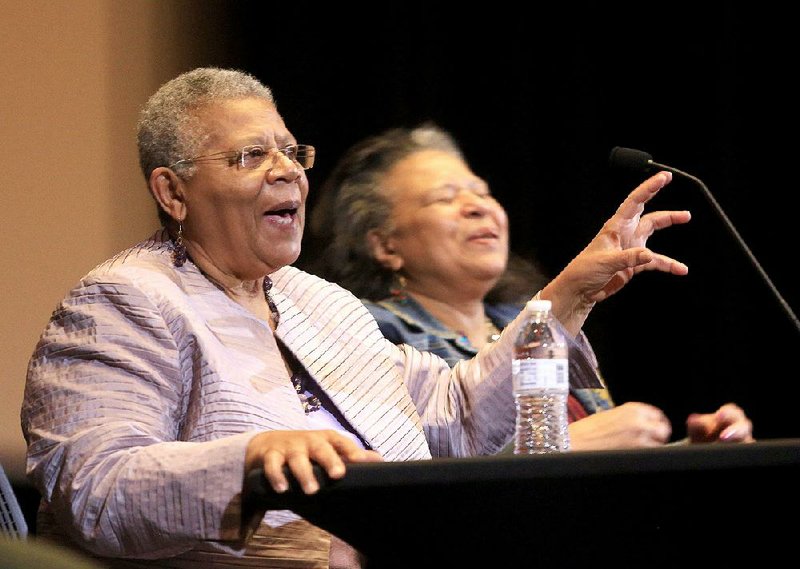 Minnijean Brown Trickey (left) and her sister, Phyllis Brown, speak Saturday at the Ron Robinson Theater about their experiences during the integration of Little Rock public schools.

Jodi Morris told Phyllis Brown and Minnijean Brown Trickey that the parade outside was in their honor as the sisters walked onto the Ron Robinson Theater stage in Little Rock on Saturday afternoon.

Morris, a park ranger at the Little Rock Central High School National Historic Site, was joking, but the moment called for a quip. Before arriving for a joint talk titled "The Brown Sisters Speak" at the theater in the River Market District, the sisters and many audience members were caught in a green-clad tide clogging downtown streets for the annual Little Rock to North Little Rock St. Patrick's Day Parade.

The roughly hour-long conversation drew together Brown, a social activist and former member of the Student Nonviolent Coordinating Committee, with her older sister. Trickey was a member of the Little Rock Nine, a group of nine black students who integrated Central High in 1957. Until then, segregation laws barred black students from Central.

The snarl of parade traffic delayed the start of the sisters' speech by a few minutes, but once the pair began, an audience of about 80 people was treated to a candid, free-form conversation, ranging from the sisters' memories of 1957 in Little Rock to Brown singing a snippet of Johnny Mathis' "Chances Are."

Early in the conversation, Trickey -- visiting from Vancouver, British Columbia, where she now lives -- recalled how she and her family dealt with the threats, tension and anger surrounding her inclusion in the Little Rock Nine in 1957.

"It's kind of interesting that my mother and I -- and even my father -- didn't talk about the everyday at Central," Trickey said. "We had a hard time talking about it within the house. I think I felt like I should protect them, and I think they felt they should protect me from the things that were happening to them. Like my father lost his business. Just the hate calls and threats and all that."

Brown, who was 9 in 1957, said she and her classmates at her elementary school didn't discuss the events occurring at Central High, but they did hear "mumblings" from teachers.

"We didn't know what was taking place in our city," she said. "However, we did know about Emmett Till because we subscribed to Jet magazine, and we saw pictures of Emmett Till."

The kidnapping and murder of Till in Mississippi in 1955 "was the beginning of a real feeling of danger," Trickey said, both for herself and other blacks, but it also sparked the civil-rights movement.

"I was furious; I was horrified," Trickey said. "His death caused us young people to be irate."

Attending Central High in the fall of 1957, Trickey said neighbors in her family's apartment house begged them to move "because there was so much happening outside the house -- rocks being thrown."

Trickey said she also didn't talk to her friends about what was happening at Central High.

"Racism is shameful to the victim," she said. "There's a great deal of shame ... so I really didn't talk about it. I think that applies to our young people now. They don't want to talk about racism because it's shameful. Any perpetrator of any oppression or demagoguery -- they always make the victim feel at fault.

"I was shamed by the events."

Two other members of the Little Rock Nine, Elizabeth Eckford and Thelma Mothershed, also attended Saturday's event but didn't participate in the discussion.

For all its seriousness, the conversation did have its moments of levity. Brown told audience members she was finally able to listen to her sister's "hi-fi" stereo system after Trickey moved to New York City. Trickey moved after her expulsion from Central High in 1958 for calling a white student a name after the student attacked her.

Brown, who resides in Little Rock, called Trickey's childhood bedroom the "most beautiful room in the house" but said she was often run out of Trickey's room for listening to her records, including music by Mathis, Dorothy Dandridge and The Platters.

"What happened when she left, and I was 9 years old, I got to go to her bedroom and [get] on her hi-fi," Brown said.

"So, it was me who was sitting there, going, 'Chances are, because [I] wear a silly grin the moment you come into view,'" she sang.

"However, who was I going to dance with? So, my dance partner became the doorknob."

Throughout the travails and shaming of 1957, Trickey said she kept her "mother's mannerisms" and that drove the people who thought they were superior to her "crazy."

"I was asked once ... by a New York Times reporter, why did I get expelled," Trickey said. "I said, 'I got expelled because I was tall, beautiful and proud.' And that's true. When I look through the photos from then -- and there are many -- there's not a single one where I'm not smiling. That's resistance."