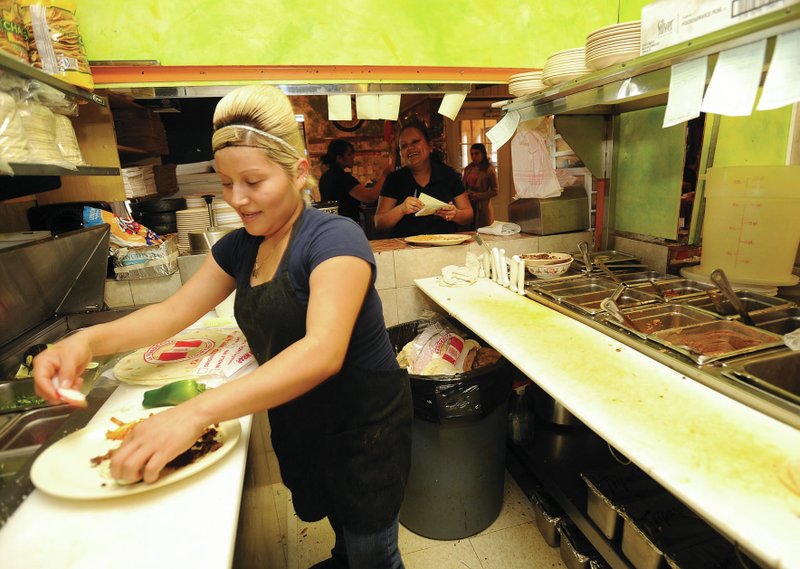 SPRINGDALE — Local residents and visitors soon will find a tasty new attraction in the city.

A taco tour officially will begin in May, said Jonathan Perrodin, co-founder of Team Springdale.

The idea for the tour came from a conversation with friends, Perrodin said. The idea is to reproduce the Fayetteville Ale Trail but with taquerias.

“We’ve been kind of marinating on it since last summer,” he said.

The self-guided tour will be tested in April, Perrodin said. Maps will be posted in Springdale taquerias and on community boards.

They also plan to place 4-by-9 inch “rack cards” at businesses throughout Northwest Arkansas, Perrodin said. The cards will have a map focused on taquerias in downtown Springdale. He referred to it as “something you can stick in your back pocket while you ride your bike.”

Taquerias are an asset to Springdale that many people don’t talk about, Perrodin said. Team Springdale is trying to create events to bring people together, and this is a good way to do that. The group was founded to promote the city through social media.

The tour could attract people from outside the city to spend time here, Perrodin said. Many people travel to surrounding cities to dine out, and the tour could help the city’s economy by keeping “local money local,” he said.

Team Springdale has a goal for 10,000 tacos to be sold this year as a result of the tour, Perrodin said. He said it will be difficult to keep track of sales, but they will check engagement through social media and stay in contact with the taquerias.

Ally Mrachek of Fayetteville ordered three chicken tostadas Friday at Taqueria Don Guerro at 332 E. Emma Ave. She said it was her second time at the establishment.

Mrachek said the tour is a creative idea, and that she would come from Fayetteville to do it. She said there are a lot of taquerias in Springdale, and people wouldn’t need to travel too far to get to others.

Sprouse grew up in Springdale and recalled when taquerias began opening in the early 1990s when the local Hispanic population began to increase.

N. Thompson St. He said the tour could help people of non-Hispanic ethnicities learn about the city’s taquerias.

Perrodin said the tour will be promoted through social media and an event booth he called the “taco tent.”

The tent will be set up May 2 at the opening of the Razorback Greenway and May 30 at the Little Craft Show at the Shiloh Square.

They plan to organize giveaways on social media, Perrodin said.

For example, they could ask people to post photos of themselves at taquerias on the tour to win prizes, like T-shirts.

Perrodin said a logo is being created and they hope to have stickers in the windows of taquerias on the tour.

A map and information about the tour will be available on the Team Springdale website by May, Perrodin said. They want the map to be interactive.

They would also like a mobile application for the tour, Perrodin said.

They would, however, need money and help from someone with expertise to make it happen.

They are discussing the possibility of group guided tours in the future, Perrodin said.

They could add breweries, like Core Brewing and Saddlebock Brewery, so those attending could get beer and tacos on the same tour.

“There’s some really great ideas that we can put together,” he said.

Perrodin said 12 to 15 taquerias were on the list last time he checked. He hopes the list will be “all inclusive” for taquerias in Springdale that serve authentic Mexican tacos.

“There’s a lot of taquerias, and they’re all so unique,” he said.

Perrodin said they are making sure to communicate with taqueria managers and owners before placing them on the map.

To be placed on the map, taqueria owners can email Team Springdale at [email protected]

“We don’t want to leave anyone out,” he said.

Erin Spandorf can be reached by email at [email protected] or on Twitter @NWAErin.