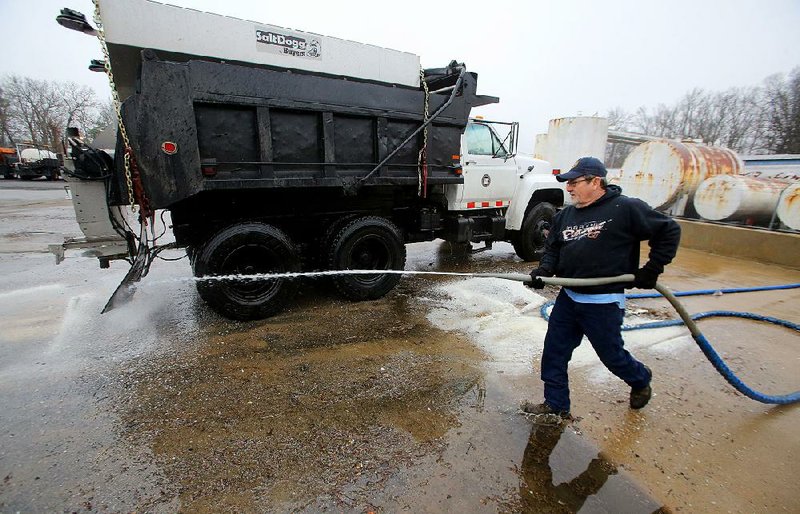 Highway crews, utility companies, schools and residents braced for another winter storm today that the National Weather Service has forecast will spread heavy snowfall across much of the state. 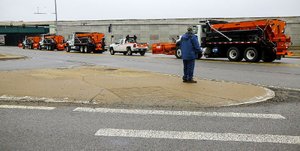 Photo by Stephen B. Thornton
A line of Arkansas Highway and Transportation Department vehicles depart from the agency’s Little Rock headquarters Tuesday ahead of the ice and snow expected today.

Forecasters expect up to 6 inches of snow and sleet to fall in north-central and eastern Arkansas and 2-4 inches in western and central portions of the state, including Little Rock.

Northwest Arkansas is expected to receive up to an inch of sleet and snow. Southern Arkansas is predicted to get up to a half-inch of ice by late this afternoon.

"Given the amount of moisture, we're going to see some intense sleet, freezing rain and snow falling at times," said National Weather Service meteorologist Jeff Hood of North Little Rock. "We will see the snow and ice accumulate quickly."

On Tuesday evening, some schools in northern Arkansas had already canceled today's classes in preparation for the storm.

Cold air is expected to cross into the state and reach the first tier of northern counties by 6 a.m., spawning sleet and snow, the weather service said. By 1 p.m., a wintry mix is likely in areas north of the Interstate 40 corridor. The southern half of the state is expected to receive a mix of freezing rain, sleet and snow by 6 p.m.

The system will leave the state by early Thursday morning.

At least 1,000 linemen and workers for Entergy Arkansas were deployed to areas expected to be hit the hardest with ice, said Sally Graham, a spokesman for the state's largest utility company.

"If areas get up to half of an inch of ice, it will create issues for spans of wire," she said.

She said contractors arrived in the state Tuesday from Missouri, Texas and Louisiana to help with any power restoration needed today.

Graham said crews were concerned that February storms may have weakened utility lines in some areas. A Feb. 16 storm knocked out power to 30,000 Entergy customers in southwest Arkansas, and 4,000 lost service last week.

"We've already had back-to-back storms in these areas," Graham said. "If we have winds pick up, we could see some outages."

Rob Roedel, a spokesman for the Electric Cooperatives of Arkansas, said workers in the utility system's 17 cooperatives were waiting to be deployed where needed.

"Unfortunately, all we can do now is wait and see what Mother Nature deals us," he said. "I can say that all the electric cooperatives are ready for spring to arrive and baseball season to begin."

In Salem, people bought milk, bread, other foods and ice-melting materials in anticipation of today's storm.

"We are absolutely swamped," said Mike Burkhart, manager of the Town and Country store in the Fulton County town. "People are grabbing up things that will keep them going for the next few days."

The weather service expects the Arctic air to reach the state by daybreak, colliding with warm, moist air from the Gulf of Mexico. In the far northern tier of the state, the precipitation should begin as sleet and quickly change to snow.

However, because temperatures are higher in the state's south -- Texarkana reached 63 degrees Tuesday afternoon -- the transition from rain to snow will be slower there, and those areas will see more freezing rain.

Arkansas Highway and Transportation Department crews planned to put salt on the state's roadways as soon as freezing precipitation began, spokesman Danny Straessle said. Teams were not planning to pretreat roadways. Pretreating can result in the salt brine mixture washing away instead of remaining on the pavement, he said.

"We'll roll the salt trucks as the temperature hits freezing," he said.

Until February, Arkansas had a mild winter, which allowed Highway Department crews to stockpile salt and other supplies. But, for several weeks, teams have been busy clearing roads from three snowstorms.

"Our vehicles have been subject to a high number of operational hours during a short amount of time," Straessle said.

The onslaught of wintry weather has also resulted in anxiety and other psychological concerns for some people, said Kristin Addison-Brown, a Jonesboro neuropsychologist.

"A lot of people have specific phobias. Some are related to weather," she said.

"Some people are still traumatized by the ice storm of 2009," Addison-Brown said, referring to a February storm that year that knocked out power for weeks to thousands of homes and businesses across the northern half of Arkansas.

"Reports of ice coming play into people's anxieties," she said.

Addison-Brown said she was also concerned that elderly people, who may be persistent in their independence, won't want to be trapped indoors by the inclement weather and will venture out and slip on the ice, injuring themselves.

Thursday should have mostly sunny skies, but temperatures aren't expected to climb above freezing, and melting will be slowed, Hood said. Thursday evening temperatures are expected to plunge into the low teens in central Arkansas and single digits in places before a gradual climbing begins.

"Western Arkansas may see a slow warm-up by the weekend," Hood said. "It won't be the quickest recovery time. We're going to see this ice for a few days."