State general revenue in February dipped by $6.6 million over a year ago to $420.7 million as individual income-tax collections slipped in the month. 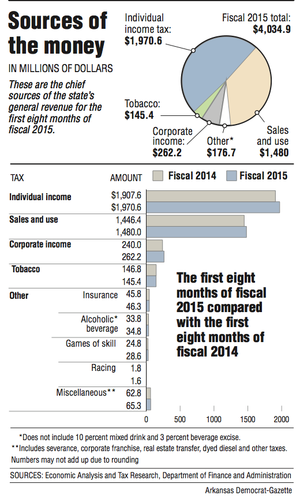 Tax collections fell $9.9 million short of the forecast, the state Department of Finance and Administration reported in its monthly revenue report released Tuesday.

February's sales-tax collections -- from taxes remitted by businesses to the state from January's sales -- increased by $9.5 million over a year ago.

"The price of gas is down significantly from what it was last year at this time ... so you have more disposable income to spend," said Larry Walther, director of the state Department of Finance and Administration.

Individual income taxes and sales and use taxes are the two largest sources for state general revenue.

The state's record general revenue collections for the month of February continues to be the $427.3 million collected in 2014, said finance department tax analyst Whitney McLaughlin.

Tax refunds and some special government expenditures, such as court-mandated desegregation payments, come off the top of gross general revenue, leaving a net amount that state agencies are allowed to spend.

"We feel like we are doing well and hopefully this will continue," Walther said.

But he added, "These months that we are going through could be volatile because of the income-tax season, so we want to make sure where we are before we make a change in the [state general revenue] forecast [for fiscal 2015]."

Last year, the Legislature approved a $5 billion general revenue budget for fiscal 2015 that increased projected spending by $109 million over the previous year, with most of the increase targeted for public schools, prisons and human services.

That budget anticipates $85 million in general revenue reductions from tax cuts enacted by the Legislature in 2013 and up to $89 million in savings from the use of federal funds to purchase private health insurance for some low-income Arkansans under the so-called private-option Medicaid expansion.

The $94.6 million isn't factored into the state's projected surplus of $216 million that lawmakers could decide to spend in this year's regular session, state officials said. Gov. Asa Hutchinson has proposed spending all of the $216 million for a variety of state needs.

Hutchinson said he's "pleased that our net revenue exceeds projections, but my goal is to accelerate the rate of growth in the private sector."

"In order to accomplish that goal, we need to be conservative in our approach to the state budget," the Republican governor said in a written statement.

"I continue to say we get $10 million, and nobody said 'Not yet'" in General Improvement Funds for the Senate, Teague said.

"We have talked philosophically," said Hendren, who is the governor's nephew. "I think most of the folks that I know are not a big fan of GIF. They are more a big fan of less government and less taxes, so I don't think you'll see a lot of pressure from our side to fight for GIF. I think you'll see more pressure for fighting for tax cuts."

The Legislature and Hutchinson already have enacted Act 22, cutting income-tax rates for Arkansans with taxable incomes ranging from $21,000 to $75,000, a reduction that was offset partly by the partial repeal of a capital-gains tax cut enacted in 2013.

According to the finance department, February's general revenue includes:

The decline in individual income taxes includes an $18.9 million dip in withholdings over a year ago to $195.7 million, lagging the state's forecast by $20.9 million.

The decline in individual income taxes in February after a surge in January "indicate timing effects of tax payments, among other factors," the department said.

According to the latest figures, the unemployment rate in Arkansas fell to 5.7 percent in December -- marking the fourth-straight month of declines, the U.S. Bureau of Labor Statistics reported.

John Shelnutt, the state's chief economic forecaster, said motor vehicle sales increased more than 6 percent, which is in line with the sales increase.

"We do expect the savings on motor fuel to come through to other types of sales, which may be part of that," he said.

• A $500,000 (2.9 percent) dip in tobacco taxes from a year ago to $15.5 million, which is $500,000 (3.2 percent) below the forecast. Monthly changes in tobacco-tax collections are attributed to uneven patterns of tobacco stamp sales to wholesale purchasers.

Richard Wilson, assistant director of research for the Bureau of Legislative Research, had a ho-hum take on February's revenue report.

"Nothing exciting," Wilson wrote in an email. "Another decent month for sales/use [collections]."