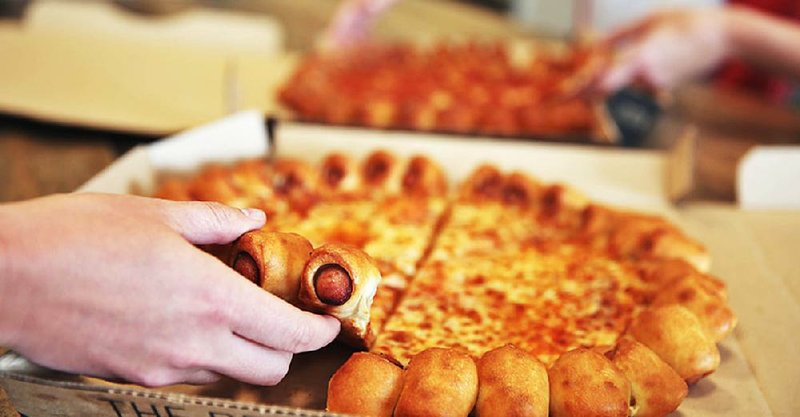 In the past few weeks, my Facebook and Twitter feed have informed me, repeatedly, that Pizza Hut is launching a new stuffed-crust pizza. Is this a big deal? It is when the crust is stuffed with hot dogs, apparently.

As a food journalist, I don't have an attitude about fast food. I evaluate restaurants based on the purpose they serve. Pizza Hut isn't fancy, and that's OK. In fact, that's great. As a kid in suburban Wisconsin, a trip to the dentist always meant a stop at Pizza Hut afterward for the lunch buffet, and I loved digging into the cheesy, stringy slices with my mom and brother.

That said, after trying the chain's Hot Dog Bites Pizza, which debuted nationwide today, I don't know what purpose it could possibly serve, besides acting as a gimmick for a few weeks until America moves on to the next thing.

The pizza is a normal Pizza Hut pie surrounded by a ring of pigs in a blanket (the blanket being dense pizza crust). The problem: The hot dog experience is separate from the pizza experience. You get through your slice and then it's all, surprise! Now you're eating a hot dog! It would be much more cohesive to have hot dog slices as toppings. Alas, that probably wouldn't make as "viral" of a pizza.

Reactions from my colleagues:

"The best thing about this pizza was the photos of it on their Japanese website -- they looked insane. In real life, kinda sad."

"The greatest thing about pigs in a blanket is the fluffy, buttery croissant that embraces the hot dog inside. The greatest part about Pizza Hut stuffed crust is the cheese -- oftentimes spilling out of the crust, overcooked on wax paper. This pizza had neither of those, but it provoked me to dip pizza into mustard. That was the best part, which is saying a lot."

"I can't shake the hot dog aftertaste of that pizza. I was hoping for a hot dog bite as part of my pizza, but you can't really eat it that way. It's like pizza with a bagel dog chaser. The look of it kind of freaked me out too. Like my pizza was staring at me. Creepy."

"Basically, this looks like a kitchen error, like someone spilled Alpha-Bits into the soup. You start with a regular pizza, albeit with a too-sweet tomato sauce and a crust with a slightly buttery taste, and then you get to the edge, and these little hot-doggy bits are visible, as though the pepperoni slicer got his fingers too close to the blade ... and the hot dogs themselves have a salty, bolognalike flavor. Can't call it an epic fail, because it's Pizza Hut after all, and my expectation bar for them never gets much above the ground. But it's pretty awful."

So how many slices did the office get through? Of an eight-slice pizza, there are still three slices languishing in the conference room. Come over? We'll have a very disappointing pizza party.