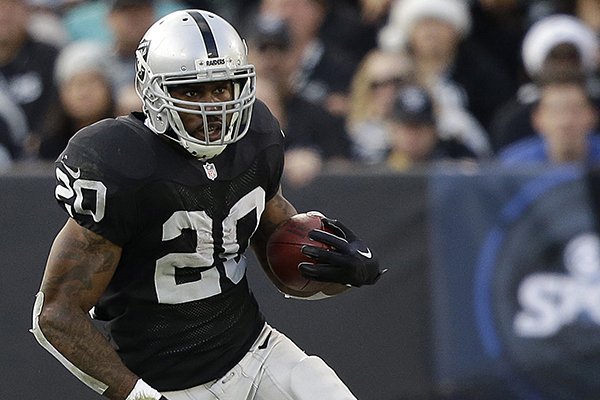 Darren McFadden has always made it a point to spend some time in the offseason back home in Arkansas.

These days it's easier.

"It's a short drive for me now," said McFadden, the former Arkansas Razorbacks running back who signed with the Dallas Cowboys in March after spending seven seasons with the Oakland Raiders. "It always feel good to come back home. I'll always be an Arkansas boy at heart."

Running back Darren McFadden, Arkansas’ all-time leading rusher, was plagued by injuries throughout his seven years in Oakland. McFadden signed a two-year deal with Dallas in March and is expected to be a key piece of the Cowboys’ ground attack after the team lost DeMarco Murray to Philadelphia. Here’s a look at McFadden’s rushing statistics with Oakland:

McFadden was in Jacksonville on Saturday leading a football camp for more than 150 children with parents employed at Little Rock Air Force Base. In less than a month, he will turn his full attention training camp and his attempt to revive a career that was largely disappointing in Oakland.

"It's great to be in Dallas," McFadden said during a break Saturday. "I'm looking forward to getting on the field with those guys and doing great things this year. ... Definitely exciting. I tell everybody I feel like a rookie all over again.

"I just want to go out there, stay healthy and run the ball the way I know I can run the ball."

McFadden, 27, was a Parade All-American at Pulaski Oak Grove High School before heading to Arkansas, where he was a two-time All-American and was twice the runner-up for the Heisman Trophy. Despite playing only three seasons before heading to the NFL, he holds most of the Razorbacks' major rushing records, including career yards (4,590 in 2005-2007), yards in a season (1,830 in 2007) and yards in a game (321 against South Carolina in 2007), which is also an SEC record.

McFadden and teammate Felix Jones were the most prolific running back duo ever at Arkansas, combining to rush for more than 7,500 yards in three seasons.

McFadden was the No. 4 overall pick by the Raiders in the 2008 draft, but his time with in Oakland was beset by injuries and failed expectations. Last year was the only season in which he played in all 16 games, and he topped 1,000 rushing yards only once (1,157 over 13 games in 2010).

A variety of injuries -- turf toe, shoulder, ankle, hamstring -- have troubled him since his rookie season. He was relatively injury-free last season but still only managed to rush for 534 yards, an average of 3.4 per carry, and scored 2 touchdowns.

That didn't stop Cowboys owner Jerry Jones -- another Little Rock native and former Razorback -- from turning to McFadden to help fill a gaping hole in the Cowboys offense after DeMarco Murray left Dallas to sign with the Philadelphia Eagles. Murray helped lead the Cowboys to the NFC East title last season when he rushed for 1,845 yards and 13 touchdowns.

McFadden signed a two-year deal with the Cowboys that could be worth up to $5.85 million.

"Being a former Razorback, we're always going to have that bond," McFadden said of his relationship with Jones. "But he stays in his office and takes care of his business, and I stay in the locker room and take care of mine."

McFadden was bothered by a strained hamstring in the closing weeks of the Cowboys' organized team activities leading up to mini-camp June 16-18, but he took part in all activities in the mini-camp.

"It's doing great," he said of his hamstring. "I feel like I had a decent mini-camp, so I'm just looking forward to putting in my work and getting ready for training camp."

It figures to be a fight for playing time in the Cowboys' crowded backfield with Joseph Randle returning for a third season and Lance Dunbar back for a fourth year.

"I'm just going out there and making plays," McFadden said. "Right now, we don't know much. We just know we're competing for a job.

"I'm with a lot of younger backs now. My thing is, I just try to give those guys some of the knowledge I know from being around the league seven, eight years now. Those guys are great athletes and great players. I look forward to being back there beside them."

With three All-Pros -- tackle Tyron Smith, guard Zack Martin and center Travis Frederick -- returning on what many are calling the NFL's best offensive line, whoever is running the ball figures to have a good chance to succeed.

"A lot of people just say that those guys are some of the best in the league, but I don't think people understand how hard they work," McFadden said. "They are some of the hardest-working guys I've ever been around.

"Seeing those guys work the way they do, I love that."