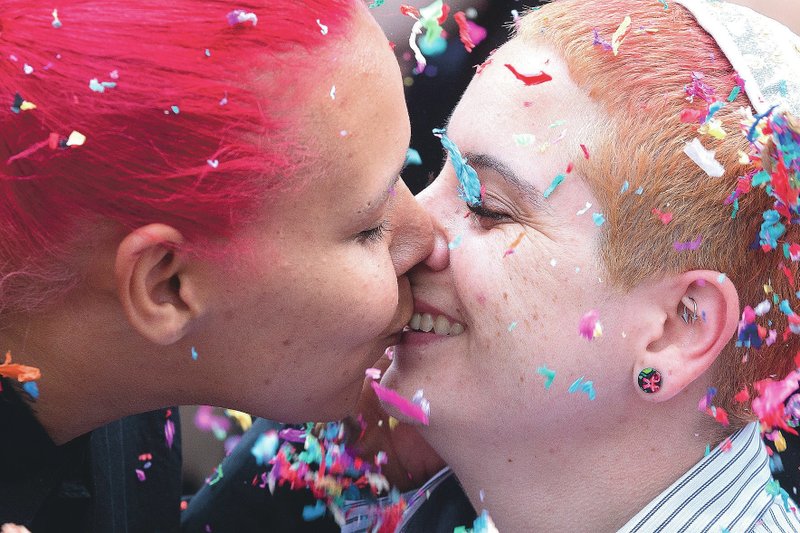 Stacey Allen (left), and Sean Allen kiss Friday after they were married at Fountain Square in Cincinnati after the U.S. Supreme Court declared same-sex couples have a right to marry anywhere in the United States. Ohio was one of 14 states enforcing a ban on samesex marriage.

Mike Emery, a strategic communications supervisor in the University of Arkansas' University Relations Department, said he was ecstatic about the Supreme Court's historic ruling.

Emery, 46, and his husband, Todd Walters, 37, have been together for more than eight years.

"There's no such thing as same-sex marriage anymore. It's marriage," Emery said. "It's all one thing now."

Hutchinson, a Republican, said Arkansas will obey the ruling in Obergefell v. Hodges even if he doesn't personally agree with it.

"Today, the Supreme Court in a 5-4 decision requires the state of Arkansas to recognize same-sex marriage," said Hutchinson. "This decision goes against the expressed view of Arkansans and my personal beliefs and convictions. While my personal convictions will not change, as governor I recognize the responsibility of the state to follow the direction of the U.S. Supreme Court. As a result of this ruling, I will direct all state agencies to comply with the decision."

Republican Attorney General Leslie Rutledge said the court ruled same-sex couples have a right to marry in all 50 states.

Earlier that day, she issued a statement saying, "Although this decision does not reflect the will of Arkansas voters, we are a nation of laws, and the judicial system has an important role to play. I am disappointed that the justices have chosen to ignore the role of the states to define marriage. The justices have issued a decision, and that decision must be followed."

Scott Perkins, spokesman for the Association of Arkansas Counties, said his organization advised counties to issue same-sex marriage licenses when requested. Many counties called the group Friday, he said.

Perkins said he didn't know of any counties refusing such requests. He said counties also are being advised to be "consistent" and make all marriage licenses gender-neutral rather than to have one form for same-sex couples and another for opposite-sex couples.

Lewallen said her office was already prepared to do so.

"Since we issued them in May of last year, our software was ready to go," she explained. "It didn't require any additional preparation."

But, unlike last year, when more than 80 same-sex couples flooded the Washington County Courthouse seeking marriage licenses the first day they were issued, just a trickle of people passed through the County Clerk's office Friday.

According to Lewallen, the clerk's office had issued eight same-sex licenses just before the close of business Friday.

Some county clerks said it would be next week before computers and license forms could be updated to process gender-neutral marriage licenses.

Scott County Clerk Barbara Whiteley said the software programmer used by Scott and Franklin counties is on vacation and won't return until "middle of next week."

"At this time, my system is not set up to process" same-sex marriage licenses, Whiteley said. "We're going to get gender-neutral forms. As soon as the software is changed, we will be issuing them."

"We've had a few calls from people asking us about it, but no one has come in yet," O'Brien said Friday afternoon.

There was one marriage license issued to a same-sex couple in the Benton County Clerk's Rogers office by the end of business Friday.

O'Brien said her office has marriage license forms for traditional and for gender-neutral couples.

"There's not much difference," she said. "On the traditional form it has 'Mr.' and 'Miss' and on the gender-neutral form it doesn't have that."

The number of same-sex marriage licenses issued Friday in the state included 12 in Pulaski County, three in both Faulkner and Carroll counties, two in Craighead County, and one each in Baxter, Chicot, Jackson and Pope counties.

Friday's numbers were a mere smattering compared to a hectic six-day period in May 2014 when marriage licenses were issued to about 600 same-sex couples, primarily in Washington and Pulaski counties.

Last year, as soon as they got licenses, many of the couples had wedding ceremonies on courthouse steps or in the crowded hallways. Then, however, there was a sense of urgency, a fear that the window of opportunity could slam shut at any time, and it did.

"We haven't had the rush we had before," Pulaski County Clerk Larry Crane said Friday. "There's just not the perceived need to get it done quickly anymore."

Emery and Walters were among the first couples to be married May 10, 2014, in Eureka Springs.

"We were one of those couples that knew, 'Hey, we're doing this, we've waited too long,'" Emery said Friday. "We'd already had the proposal and the engagement behind us."

Emery said his marriage now will be recognized in any state he and Walters travel or move to. He and his husband plan to update their health insurance policies at the university, where Walters also works. Emery, an Air Force veteran, said the U.S. Department of Veterans Affairs already added Walters to his spousal benefits, which include a survivors' pension and specific burial rights. He added gay couples will soon be able to file joint tax returns in all 50 states, change their names on drivers' licenses and Social Security cards and adopt children.

"It comes down to death, health and taxes," Emery said. "That's the basic thing, is just being able to do the same things that heterosexual couples were taking for granted in the same situation."

Jennifer Rambo and Kristin Seaton, both of Fort Smith, were the first same-sex couple married in Arkansas during that brief period in May 2014. They slept in their car so they could be first in line at the Carroll County Courthouse in Eureka Springs.

"Our prayers have been answered," Jennifer Seaton-Rambo said Friday. "Words cannot begin to reveal how much happiness is within us. Our family will have protection, and I can securely say that today. The ruling will aid in eliminating the cycle of hate, and will promote the process of accepting one another."

Cheryl Maples, who filed a lawsuit that led to the first same-sex marriages in Arkansas, said in a news release Friday was a "fantastic day!"

"Equality and love have been recognized by the highest court in the land," said Maples. "The decision is beautiful! I am thrilled for the LGBT community!"

Emery said there are still hurdles to clear, however.

The Arkansas Civil Rights Act of 1993 and the federal Civil Rights Act of 1964 prohibit acts of discrimination on the basis of race, religion, gender and national origin, but neither law mentions sexual orientation or gender identity. That means Arkansans who think they've been fired or evicted because they're gay have with no legal recourse.

"(The Supreme Court decision) is a huge step, but there's still some more to go," Emery said.