SEC flagged for an outdated symbol 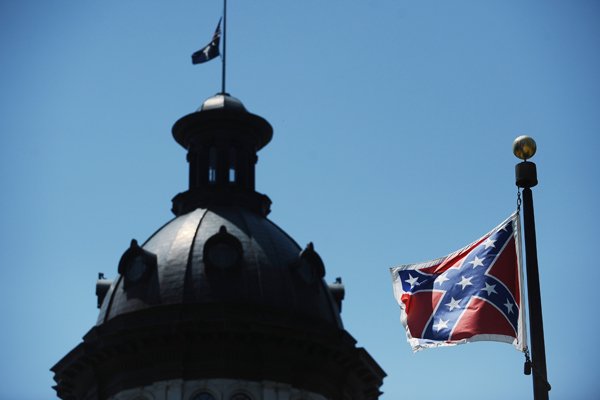 FAYETTEVILLE -- The masochistic few who reluctantly would acknowledge themselves as longtime readers of this column can vouch for the author's distaste for corporate collegiate athletics.

Today's corporate trend to build "brands" rather than long-term relationships is a frequent lament among those who know how programs like Arkansas were built and sustained.

However, with the unspeakable horror of nine black worshipers murdered at the Emanuel African Methodist Episcopal Church in Charleston, S.C., the opportunity arises for the South's major athletic entity raising its powerful corporate voice for good.

The SEC, nationally the most powerful collegiate conference whose religion-like football passions both binds and divides the South, can compel many in the region to look at ourselves and our history and ponder what we can do to prevent historical horrors from repeating.

Prior to the murders, the accused, Dylann Roof, 21, had photos posted of himself holding a Confederate flag while wielding a handgun.

A bitter irony looms over the South Carolina State Capitol in Columbia, a city housing the University of South Carolina, a SEC member. The Confederate flag flies high while the American flag lowers half-mast in respect to the nine murdered.

The contrasting Confederate flag, and with it SEC territory which still gets associated with the Confederacy, receives broad-spectrum scathing national criticism.

The SEC as a body should join the chorus. It would be a strong corporate voice heeded in the South by college football's fans and by powerful corporate sponsors. The SEC voice becomes stronger still if individually all of its schools' administrations -- academic and athletic -- express similar outrage.

The Confederacy and its history in the South is not so black-and-white simple even if some solely may now view the Civil War as the North fighting to free black slaves from Southern white owners.

Historians will tell you it was vastly more complex. Many who fought for the South had no slaves but fought with honorable intentions for their state and their neighbors. Some from the North were not in it for motives so pure as freeing slaves.

The Confederate flag always has a place in museums and in the study of American history, but the days of it waving as a flag of the present seem horrifically, historically past.

Alas, that history stayed post Civil War current far too long in the SEC and the since defunct Southwest Conference, the University of Arkansas' league until the 1991-92 season.

The history of the SEC and SWC is rife with all-white teams and Confederate flags waved at the games, but things change. People change. Symbols change.

Those leagues began integrating in the late 1960s. Many who played and or coached on those previous all-white teams became the chief catalysts for change.

They did good work, but obviously more things must change.

Surely after Charleston most recognize that the Confederate flag, which for some they say seemed only a historical symbol of Southern pride, now becomes the symbol of murderous racism that preyed on those praying in peace.