Education board votes down ACT switch 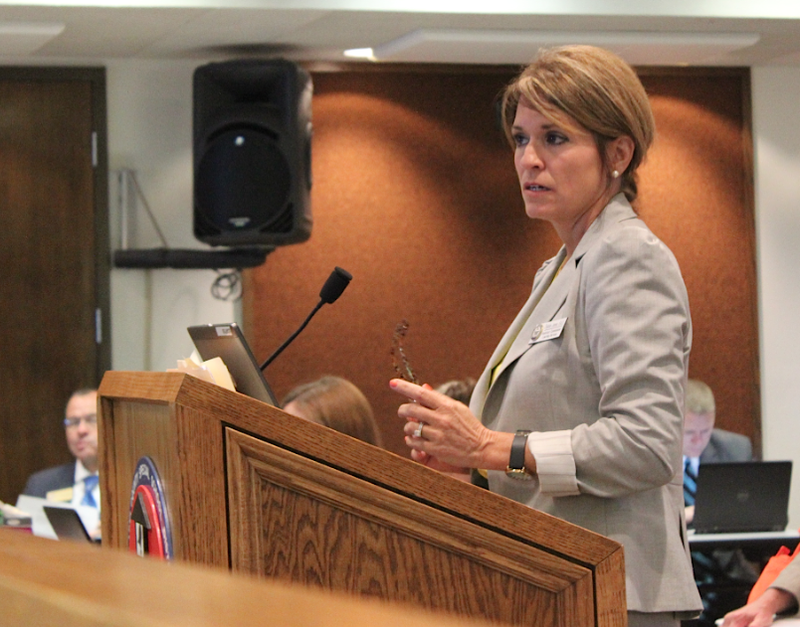 Deborah Jones, assistant commissioner for learning services with the Department of Education, speaks Thursday to the state Board of Education.

The state Board of Education voted Thursday against authorizing the state to administer standardized tests produced by ACT Inc., clashing with a review panel that recommended the change and Gov. Asa Hutchinson, who endorsed the plan.

Hutchinson on Wednesday praised the recommendation from the Governor's Council on Common Core Review that Arkansas offer the ACT tests rather than the Partnership for Assessment of Readiness for College and Careers, or PARCC, ones that debuted to some criticism this past school year.

Hutchinson said the ACT tests are better for several reasons, including that they will allow Arkansas to better track student performance and compare results with other states.

But Education Board members criticized the process as rushed and said they had various concerns about approving the change. They voted 7-1 in favor of a motion not to make the switch with only board member Alice Mahony voting against it. The board then voted the same way to continue the PARCC assessments.

Board member Mireya Reith said her phone was "ringing off the hook" this week from teachers who felt left out of the process that resulted in the recommendation to shift to ACT tests. She also noted that the state board reached out and offered to have a representative on the Common Core review panel, which was led by Lt. Gov. Tim Griffin.

"That opportunity was not taken," she said.

Board member Vicki Saviers said she was concerned by the lack of involvement from Department of Education assessment officials as well as having to approve the measure without a contract in place.

Griffin said Thursday after the vote that he was "obviously disappointed" by the decision. But he defended the process the review panel followed, saying it was inclusive of all stakeholders, including teachers.

"Anybody that thinks that this council and its overwhelming vote was based on politics hasn't been paying attention and hasn't watched the 40 hours of hearings and hasn't been in the listening sessions," he said, saying that such a suggestion is an "insult to the 16 Arkansas citizens who volunteered" on the panel.

Hutchinson in a statement Thursday afternoon that he was "disappointed" by the state Board of Education's decision.

"The legislature had directed through Act 1074 that the current PARCC contract not be renewed long term and for the State Board to consider a change for the 2016-17 school year," Hutchinson said in the statement. "I determined it best to make the change for the next school year for the sake of long-term stability for the teachers, school districts and for the sake of our students."

Hutchinson will work with Education Commissioner Johnny Key and the board on "next steps" for student assessments, he said.

Griffin added he believes three new appointments are coming to the board, though he didn't know the details on whether another vote could be held in time for the next school year. Hutchinson will pick replacements for Chairman Sam Ledbetter and Mahony, whose terms are expiring, as well as board member Kim Davis, who announced he is stepping down after taking a job with the Walton Family Foundation.

Board member Toyce Newton before the vote also voiced displeasure with timing of the process and how it did not involve competitive bids.

"It's not clean, and I think we owe that to ourselves to have a clean process," she said, adding that it "doesn't align with good business practices."

Deborah Jones, assistant commissioner for learning services with the Department of Education, presented the board the proposal, calling the ACT tests a "good option."

Board member Jay Barth, though, said approving the ACT tests would mean more instability. He said one major problem is another change in assessments would mean the board wouldn't have consistent data as they judge academic distress situations.

"Nobody on this board is out to be an obstructionist at all," he said. "But we are left with so many questions."